On January 18 2021, Imgur user SisterMidnight shared an image called, “Here’s the letter George H. W. Bush left Bill Clinton for the first day of his presidency,” with the comment “Classy,”  and “I wonder what President Biden will get,” with the following image: 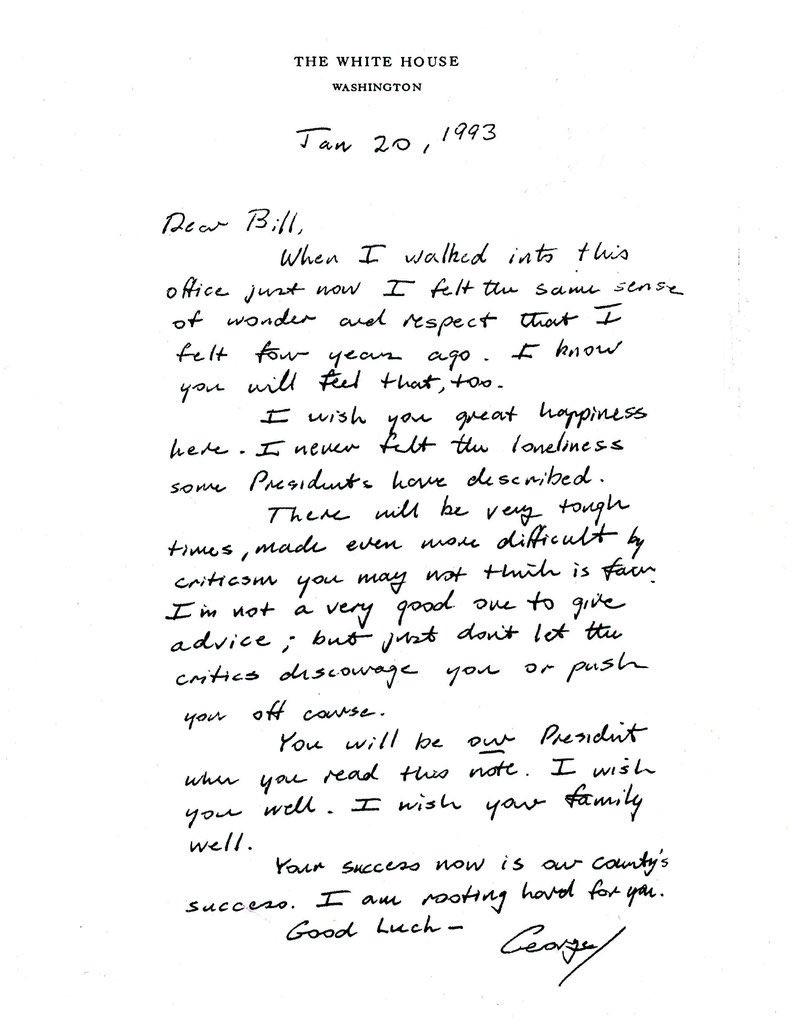 When I walked into this office just now I felt the same sense of wonder and respect that I felt four years ago. I know you will feel that, too.

I wish you great happiness here. I never felt the loneliness some Presidents have described.

There will be very tough times, made even more difficult by criticism you may not think is fair. I’m not a very good one to give advice; but just don’t let the critics discourage you or push you off course.

You will be our President when you read this note. I wish you well. I wish your family well.

Your success now is our country’s success. I am rooting hard for you.

The letter drew a striking contrast to the highly polarized climate of the Trump administration, which culminated in a violent insurrection at the United States Capitol on January 6 2021. The letter’s cordial tone was particularly striking in light of the fact that then-incumbent Republican president George Bush had been unseated after his first term by Clinton, a Democrat:

George Bush served one term as president of the United States. His years of experience in foreign policy prepared him well to serve as the nation’s first post-cold war president. When the Iraqi army under Saddam Hussein invaded Iraq’s oil-rich neighbor Kuwait, Bush responded promptly and boldly on both the diplomatic and military fronts. The lightning-quick Persian Gulf war lifted his public approval rating to an astonishing 91 percent. On the domestic front, his administration fared less well, diminished by a persistent economic recession, mounting federal deficits, and his broken campaign pledge not to raise taxes. Bush also suffered from his lack of what he called “the vision thing,” a clarity of ideas and principles that could shape public opinion and influence Congress … Standing for reelection, Bush faced a “New Democrat,” Arkansas Governor Bill Clinton, and a scrappy Texas billionaire independent candidate, Ross Perot. In November 1992, President Bush finished second with 38 percent of the vote to Clinton’s 43 percent and Perot’s 19 percent.

January 2021 wasn’t the letter’s first appearance on social media, either. In June 2016, then-candidate Hillary Clinton shared a version of the letter on her Instagram account, validating its authenticity and writing:

You may have noticed a letter that went viral on the internet this week. The letter is from George H.W. Bush’s presidential library. I hadn’t read it in a long time, until yesterday. It moved me to tears, just like it did all those years ago. It’s the letter that President Bush left in the Oval Office for my husband, back in January of 1993. They had just fought a fierce campaign. Bill won, President Bush lost. In a democracy, that’s how it goes. But when Bill walked into that office for the very first time as President, that note was waiting for him.

It had some good advice about staying focused on what mattered, despite the critics. It wished him happiness. And it concluded with these words: “You will be our President when you read this note. I wish you well. I wish your family well. Your success is now our country’s success. And I am rooting hard for you. George.”

That’s the America we love. That is what we cherish and expect.

On Bush41.org (the official website of the George Bush Presidential Library & Museum), a copy of the letter [PDF] was stored in a larger document, “President George Herbert Walker Bush Eulogy & Media Tribute Collection December 2018.” Bush Sr. died in November 2018, and on page 37 of the collected writings was a Washington Post editorial written by U.S. President Bill Clinton.

In addition to the text of the letter, Clinton wrote in part:

No words of mine or others can better reveal the heart of who [Bush Sr.] was than those he wrote himself. He was an honorable, gracious and decent man who believed in the United States, our Constitution, our institutions and our shared future. And he believed in his duty to defend and strengthen them, in victory and defeat. He also had a natural humanity, always hoping with all his heart that others’ journeys would include some of the joy that his family, his service and his adventures gave him.

His friendship has been one of the great gifts of my life. From Indonesia to Houston, from the Katrina-ravaged Gulf Coast to Kennebunkport, Maine — where just a few months ago we shared our last visit, as he was surrounded by his family but clearly missing Barbara — I cherished every opportunity I had to learn and laugh with him. I just loved him.

Many people were surprised at our relationship, considering we were once political adversaries. Despite our considerable differences, I had admired many of his accomplishments as president, especially his foreign policy decisions in managing America’s response to the end of the Cold War and his willingness to work with governors of both parties to establish national education goals. Even more important, though he could be tough in a political fight, he was in it for the right reasons: People always came before politics, patriotism before partisanship. To the end, we knew we would never agree on everything, and we agreed that was okay. Honest debate strengthens democracy.

While we maintained a respectful, friendly relationship throughout my presidency, it was only when President George W. Bush asked us to jointly spearhead American relief efforts in the wake of the Indian Ocean tsunami of 2004 and again after Hurricane Katrina in 2005 that we got to really know each other. When we met with children who lost their parents in the tsunami, he was moved almost to tears when they gave us drawings they’d made to capture their pain and slow recovery in grief counseling. When we were asked to speak together at Tulane’s graduation in 2006, I saw his genuine feeling for the students, many of whom had suffered in the flooding of New Orleans, and others who had shown heroism and love in caring for their neighbors. “Each of you here has inspired me,” he told them. “When I look at our world, the good I see far outweighs the bad, which maybe explains why I am a real optimist about the future that you all will be facing.”

Although George H.W. Bush’s January 1993 letter to then-incoming U.S. President Bill Clinton seemed nearly quaint and difficult to fathom amid a deeply hyperpartisan, excruciatingly fragile transfer of power in January 2021, the letter is authentic and its existence already well documented. Presidential candidate Hillary Clinton shared it on Instagram in 2016, President Bill Clinton transcribed it in a 2018 column, and the letter was held in Bush Sr.’s archives as part of his “eulogy” file.