United States President Donald Trump left office as "the only president never to hit 50% job approval at any point in his presidency and is the least popular president in Gallup's polling history."

On January 19 2021, the following screenshot of a tweet appeared on Imgur, featuring claims that outgoing United States President Donald Trump never once went over 50 percent approval during his time in office, and was in fact the “least popular” United States president in Gallup’s polling history: 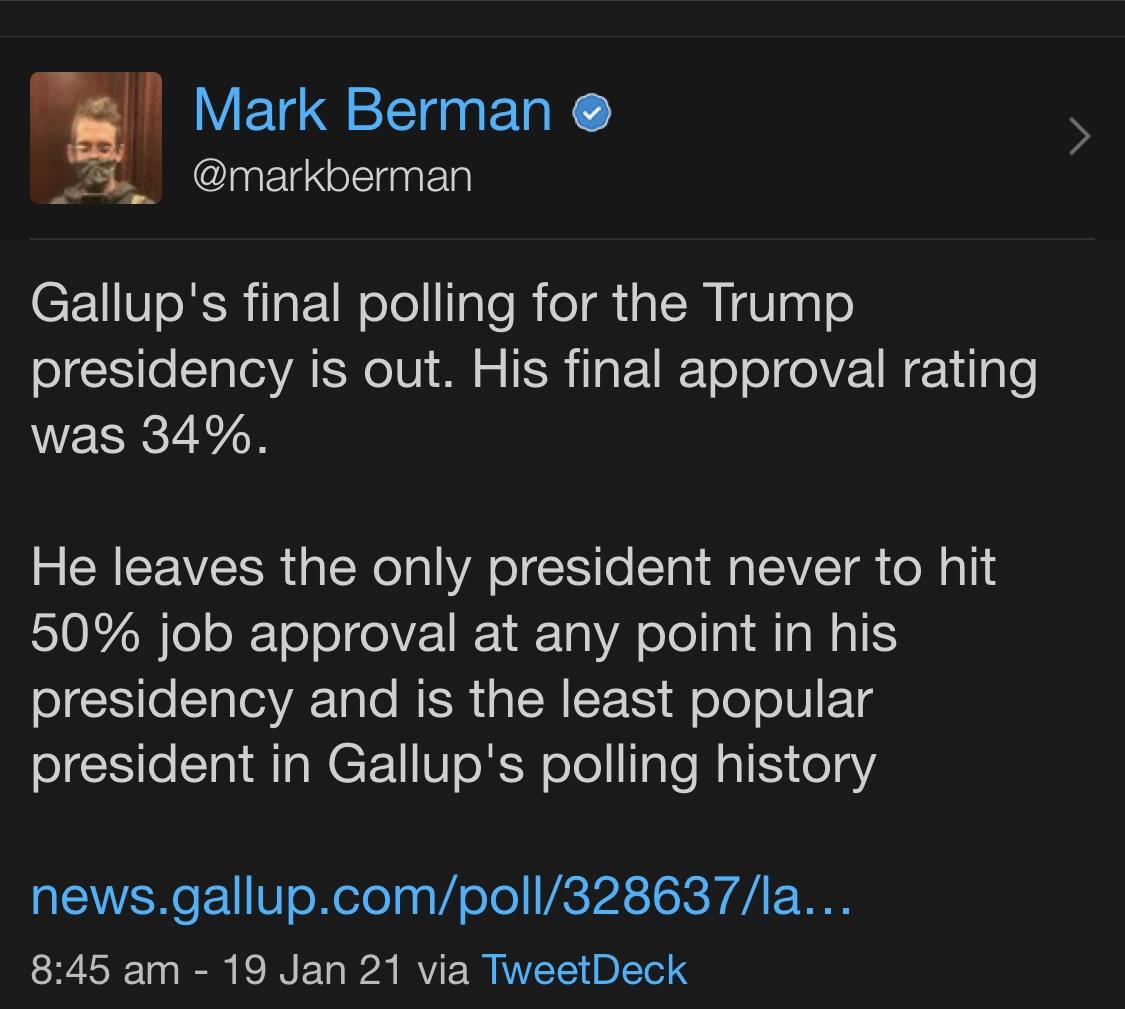 Gallup's final polling for the Trump presidency is out. His final approval rating was 34%.

He leaves the only president never to hit 50% job approval at any point in his presidency and is the least popular president in Gallup's polling historyhttps://t.co/leRonGoGJ8

Gallup’s final polling for the Trump presidency is out. His final approval rating was 34%.

Berman linked to a January 18 2021 press release from polling outfit Gallup (“Last Trump Job Approval 34%; Average Is Record-Low 41%”), in which many of the cited statistics appeared:

The 34% job approval rating for Trump in Gallup’s Jan. 4-15 [2021] poll is one point lower than his prior lowest single rating, registered on several occasions in late 2017 … Trump’s approval high point was 49%, achieved on several occasions in early 2020 spanning the time between the Senate trial in his first impeachment and the initial stages of the coronavirus pandemic, when Americans were giving him high marks for his response to it.

His support fell below 40% in two June 2020 polls amid racial justice protests in response to the death of George Floyd at the hands of police and growing displeasure with his handling of the pandemic. By the time of the 2020 election in which he sought a second term, his support had recovered somewhat, and 46% approved of the job Trump was doing.

Noting that “public support for Trump did improve modestly in each year of his presidency,” Gallup added that “any positive momentum the president enjoyed was erased after the election” and explained:

Trump’s refusal to concede the election and his attempts to overturn the results, the Jan. 6 [2021] riots on Capitol Hill, a U.S. surge in coronavirus cases and deaths, and his second impeachment contributed to a postelection erosion in support for him.

On average, “lame duck presidents” before Trump saw a seven-point increase in job approval. Jimmy Carter is the only other president whose approval ratings declined during the transition period.

Gallup concluded with a “Bottom Line” section, observing that Trump would depart “office as the least-positively evaluated president in the Gallup polling era,” after having also just received his lowest approval rating, “thanks largely to a sharp decline in public support during a lame-duck period marked by controversy, which could overshadow his accomplishments.” On a separate page, Gallup maintained a tally of Trump’s approval ratings in various periods during his one-term presidency.

As for Trump’s “personal best” of 49 percent approval, a February 4 2020 press release indicated his first impeachment and pre-pandemic economic circumstances contributed to that all-time high; additional polling identified Joe Biden as a candidate respondents believed was likeliest to beat Trump:

Impeachment and a strong state of the nation may have brightened Trump’s election prospects, but U.S. registered voters are evenly divided at 50% as to whether he deserves re-election. When the question was last asked, just before the 2018 midterm elections, 41% of Americans thought Trump deserved a second term.

Sorting by “highest approval” descending placed Trump squarely at the top of the list, with the lowest high of 49 percent on five dates in 2020. The next-lowest high approval was Richard Nixon at 66 percent in 1973, followed by Barack Obama at 67 percent in 2009.

A popular tweet shared to Imgur maintained that as Donald Trump (unwillingly) left office, his final approval rating was 34 percent; further, he stood as “the only president never to hit 50% job approval at any point in his presidency” per Gallup, and finally he was “the least popular president in Gallup’s polling history.” The figures were accurate, and Gallup’s press release affirmed Trump was “the least-positively evaluated president in the Gallup polling era, based on the average of his approval ratings.”