Former Secretary of State Hillary Clinton once said she admired Margaret Sanger, the founder of what would become Planned Parenthood.

A March 2009 event honoring then-Secretary of State Hillary Clinton has lingered on for years online, as both right-wing political figures and internet “influencers” have linked her to another unpopular figure in their circles, Margaret Sanger.

That month, the Planned Parenthood Federation of America (PPFA) gave Clinton an award named after Sanger, the group’s founder, meant to “recognize leadership, excellence, and outstanding contributions to the reproductive health and rights movement.”

Clinton said at the time:

I have to tell you that it was a great privilege when I was told that I would receive this award. I admire Margaret Sanger enormously, her courage, her tenacity, her vision. Another of my great friends, Ellen Chesler, is here, who wrote a magnificent biography of Margaret Sanger called Woman of Valor. And when I think about what she did all those years ago in Brooklyn, taking on archetypes, taking on attitudes and accusations flowing from all directions, I am really in awe of her.

As so often happens, the remark has been turned into a meme, often placed alongside quotes used to demonize Sanger like, “The most merciful thing that the large family does to one of its infant members is to kill it”: 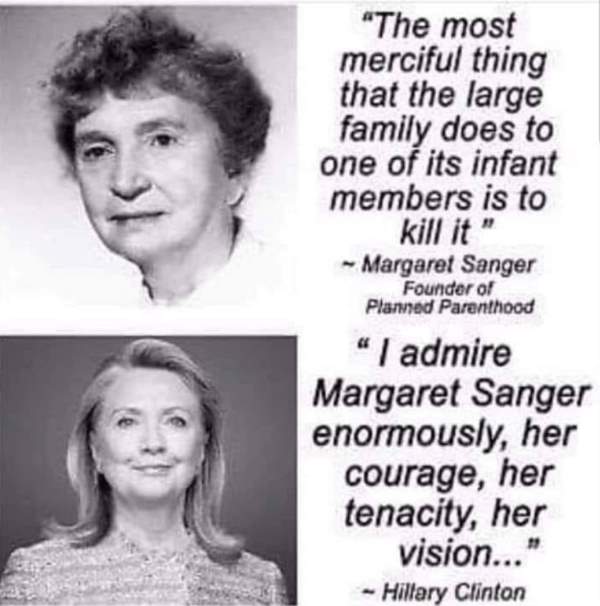 In reality the line, taken from Sanger’s 1920 book Woman and the New Race, accompanied a chart showing the relationship between the size of a family and infant mortality rates; while 23 percent of first-born children died within one year of their birth, the mortality rate for twelfth-born children was 60 percent:

Many, perhaps, will think it idle to go farther in demonstrating the immorality of large families, but since there is still an abundance of proof at hand, it may be offered for the sake of those who find difficulty in adjusting old-fashioned ideas to the facts. The most merciful thing that the large family does to one of its infant members is to kill it.

The same factors which create the terrible infant mortality rate, and which swell the death rate of children between the ages of one and five, operate even more extensively to lower the health rate of the surviving members. Moreover, the overcrowded homes of large families reared in poverty further contribute to this condition. Lack of medical attention is still another factor, so that the child who must struggle for health in competition with other members of a closely packed family has still great difficulties to meet after its poor constitution and malnutrition have been accounted for.

Another iteration of this weaponized narrative places a photo of Clinton alongside one of Sanger and her statement, “We do not want word to go out that we want to exterminate the Negro population”: 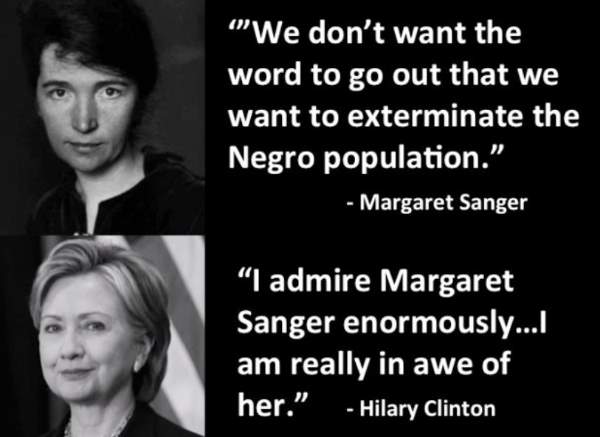 As we have noted in the past, Sanger made that remark in reference to wanting Black medical providers to meet with Black community members to provide better care, and academic analyses have failed to find evidence that Sanger targeted Black populations in particular.

Clinton explained the context behind her remarks while testifying before the House Foreign Affairs Committee shortly after receiving PPFA’s award, after GOP Rep. Jeff Fortenberry characterized promoting reproductive choice outside the U.S. as “exporting the abortion industry.”

“I admire Thomas Jefferson, his words and his leadership,” Clinton said:

And I deplore his un-repentant slave holding. I admire Margaret Sanger being a pioneer and trying to empower women to have some control over their bodies, and I deplore the statements you have referenced. That is the way we often are when we look at flawed human beings. There are things we admire, and things that we deplore.

In October 2021, Fortenberry was indicted by a federal grand jury for allegedly lying to federal agents about $180,000 in campaign contributions funneled to him and three other Republican political figures, including ex-Rep. Lee Terry of Nebraska; Utah Sen. Mitt Romney of Utah; and California Rep. Darrell Issa.

Authorities said that unlike Fortenberry, the other three lawmakers and their respective campaigns were not aware that they had received improper donations from a Nigerian billionaire identified as Gilbert Chagoury. Chagoury paid a $1.8 million dollar fine.

Fortenberry would later resign from office; in March 2022 he was found guilty of making false statements to federal investigators and “scheming to falsify and conceal material facts.” In June 2022 he was sentenced to two years of probation and ordered to both perform 320 hours of community service and pay a $25,000 fine.