When squirrels land after jumping, they do so with one arm down and kneeling as seen in "superhero movies."

The “science of cute” collided with animal behavioral science on social media in a major way after a post about squirrels went viral.

“The best thing I’ve learned this week is that when squirrels fall/jump — they land like superheroes,” Jack Murphy wrote alongside photographs of two of the creatures seemingly kneeling:

The best thing I’ve learned this week is that when squirrels fall/jump – they land like superheroes pic.twitter.com/XuY80hCuNp

As the post spread, Murphy mentioned that he heard the claim on the podcast Stuff You Should Know; the show’s hosts, Josh Clark and Chuck Bryant, mentioned the claim in passing during a short episode on squirrel behavior released on November 18 2020.

“There’s one other thing you need to know about squirrels,” Clark said. “It’s pretty amazing. When they jump off of a tree and land on the ground if you take a snapshot photo of them landing, they land like they’re superheroes — in like a three-point stance with one of their arms balled up into a fist and pulled up by their side. They should have a cape and a mask on, basically.”

“I think we might have mentioned that in another episode, but it is worth looking up on the Internet for sure,” Bryant added.

The claim itself pre-dates both the duo’s remarks and Murphy’s post; one of the squirrels featured in his tweet, for example, might have been the subject of a 2017 post on Reddit that generated coverage from both news outlets and blogs after prompting other users to try to one-up each other by using digital editing programs to place it in funny situations — including superhero movies: 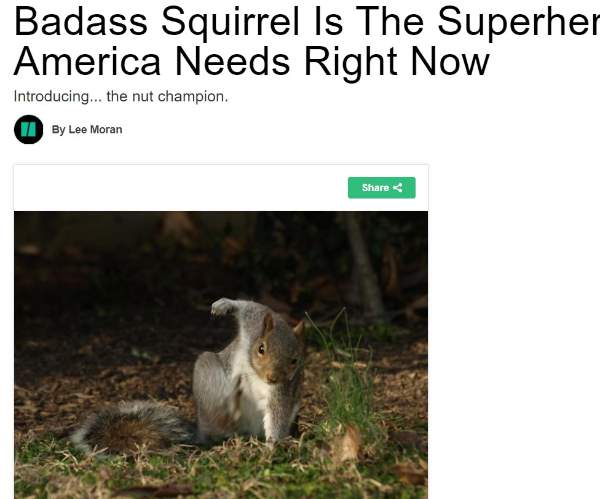 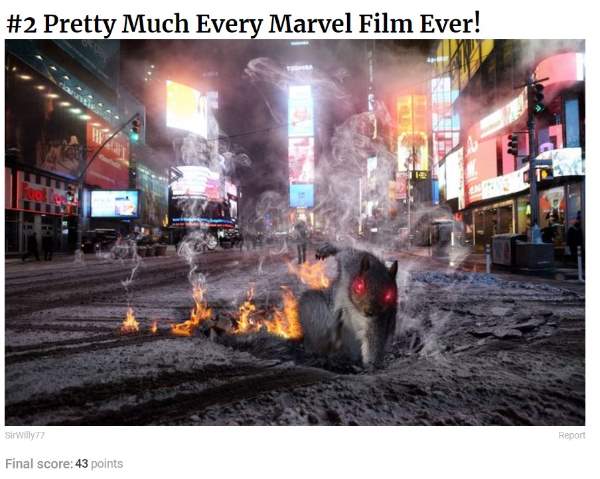 The claim has continued to circulate online since then, with another round of posts following the viral tweet. In a January 2020 story the pop culture blog ComicBook.com noted:

Is super hero landing going to be the next viral sensation for photos posted by people on social media? It won’t be any worse than that planking sensation from a decade ago.

The comment section on the Reddit post goes on to quote Deadpool, referencing his comment about such a landing being bad for your knees. “Totally impractical, they all do it,” another commenter responds. You just have to love the internet on a slow news day. There is always plenty of entertainment and comment section which helps fill up an article about squirrels posing like super heroes. Not everyday can be loaded with new trailers and exciting casting drama.

But after looking it up as Bryant suggested, we can tell you that this is not true. (Sorry.)

Zoologist and wildlife photographer Dani Cooper debunked the claim in Murphy’s original thread, posting footage of what was really captured in the photograph — squirrels scratching their armpits:

This is fake lol.

These squirrels are scratching their armpits. As demonstrated by baby squirrels I filmed. pic.twitter.com/FXjzVzn6vo

(Conner herself is no stranger to going viral; a separate video of her recording audio from a seven-week-old squirrel in June 2020 has been shared more than 200,000 times.)

Lucia Jacobs, a professor of psychology and neurology at the University of California-Berkeley who has researched squirrel behavior — whose research on squirrel behavior was cited by the podcast in the very same episode that inspired Murphy’s tweet — also debunked the claim.

“They land on their front paws, actually,” Jacobs told us. “In fact, if it’s a very narrow branch they will swing under the branch and then scramble up.”

“They can leap across huge spaces and they have an amazing memory for where they bury their nuts. They can do amazing things,” she said.

To illustrate Jacobs’ point, we took a screen capture from a slow-motion video posted in 2017 of a squirrel jumping between two trees: 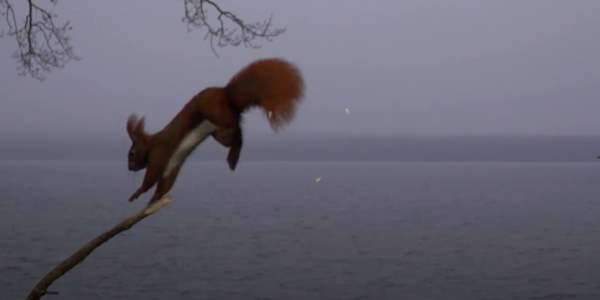 The same behavior can be seen in a separate video posted in 2019: 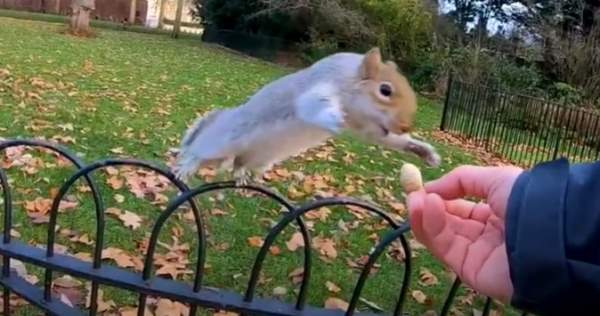 We contacted both Murphy and Conner about the Twitter thread but have yet to hear back. But other users did respond negatively when Connor posted her video.

“You must be fun at parties,” one wrote, in an observation with which every fact-checker must be familiar.

Jacobs said she understood why people would be frustrated after hearing the truth, noting that researchers have also studied this type of emotional response as part of what the Guardian newspaper has called the “science of cute.”

“It’s kind of the way we feel when a baby does something the first time, we think it’s incredibly cute,” Jacobs told us. “This is why people — myself included — dress our dogs up in Halloween costume. These interpretations are tapping into our human need to see ourselves mirrored in other creatures.”

We also contacted Bryant and Clark seeking comment; we have yet to hear back.