Outside the United States, a European news outlet bore the headline "How Election Was Stolen," with images of Joe Biden and Donald Trump.

In late December 2020, a screenshot of a newspaper headline reading “How Election Was Stolen” was belched forth from the bowels of the internet and began to circulate, bearing additional commentary, “Funny how the rest of the world gets different news than us”: 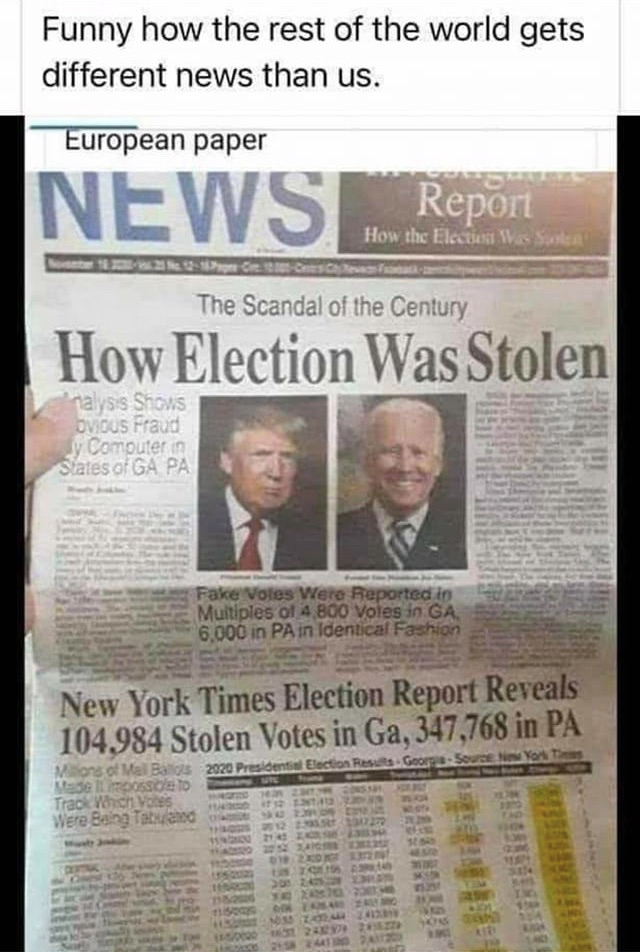 On meme aggregator iFunny.co, the following caption accompanied the image — labeling the newspaper as “European”:

Funny how the rest of the world gets different news than us.

European paper[:] The Scandal of the Century How Election Was Stolen

Separately, the image traversed Facebook and other social media platforms with a very clear implication — that international outlets concurrently reported that the November 3 2020 general election in the United States was “stolen,” and incumbent President Donald Trump’s victory was improperly bestowed upon former Vice President and President-Elect Joe Biden.

iFunny.co commenters took the claim at face value, although they didn’t agree the purported European origin of the “How Election Was Stolen” headline was necessarily significant:

To get the real news about America, you have to read papers from other countries, and yet they try to tell us we have a free press

It’s true. I take more interest in US politics than any other country, including my own and in all fairness, you did indeed get fucked. The whole election is a ploy to sell out to China and have a black woman do it when the pres elect gets nooned.

There are newspapers and websites based in America which say the same. It being from Europe means nothing.

Only one of the visible comments challenged the titular claim it was “Funny how the rest of the world gets different news than us,” or that the headline originated outside the United States:

This paper is from the states btw.

Whoever created the meme cut off the newspaper’s masthead and other identifiers, probably deliberately, which obscured the source of the claim. As it happened, that last commenter was correct — the headline appeared on a newspaper out of Louisiana called Central City News. A November 19 2020 article [PDF] in Central City News had the headline, “The Scandal of the Century: How Election Was Stolen,” subheaded “Analysis Shows Obvious Fraud By Computer in States of GA, PA.”

In the first three paragraphs, the source made repeated and clear reference to being based in the United States:

Election Day in the United States, held this year on Tuesday, Nov. 3, 2020, was really a series of 51 separate elections — one in each of the 50 states and the District of Columbia. The vote total in each determines how the electoral votes of that state or district will be cast in the Electoral College on Dec. 14, 2020.

Thirty of those states and more than 2,000 counties have something in common. The citizens of those areas vote on voting machines provided by Dominion Voting Systems with software from Smartmatic Vote Counting System.

While supporters of President Trump cast about for evidence of vote fraud in the form of unsigned ballots, mishandled paper ballots, and evidence of “retail” vote fraud, proof of massive computer-based vote fraud is right before the nation’s eyes. It is going unnoticed in this hyper-partisan atmosphere.

On December 29 2020, a homepage for CentralCityNews.us (archived), a right-wing community newspaper local to the privatized city of Central, Louisiana and run by former Republican lawmaker Louis “Woody” Jenkins — who has his own history of making accusations of fraud after discovering he is on the losing side of an election — displayed a number of articles similar in tenor:

Screenshots of a newspaper headline (“How Election Was Stolen”) circulated with text at the top reading “Funny how the rest of the world gets different news than us,” and indication the outlet was a “European” newspaper. However, the meme’s maker ensured that information identifying the source as based in Louisiana (in the United States) was obscured; the content in question was not from “the rest of the world.”