As conspiracy theorists continued trying to convince themselves that Donald Trump did not definitively lose the November 2020 presidential election to Joe Biden, they also found another way to recycle — yet again — a reliable boogeyman in financier George Soros.

The latest regurgitation of the anti-Semitic conspiracy theory came in a meme based on a photograph showing Soros sitting alongside Mark Malloch-Brown, chairman of the tech company Smartmatic:

George Soros with the owner of Smartmatic, the software that switched votes from Trump to Biden.

I heard the Soros family wants this photo off the Internet. You know what to do. 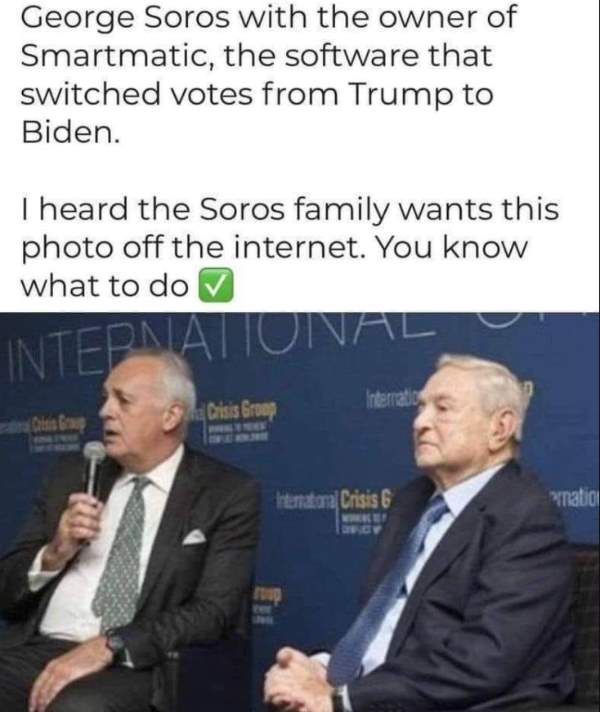 The meme’s photo first spread on Twitter a month earlier with the same manufactured shock that Malloch-Brown was “Malloch-Brown is on the board of the Open Society Global Foundarion [sic]“: 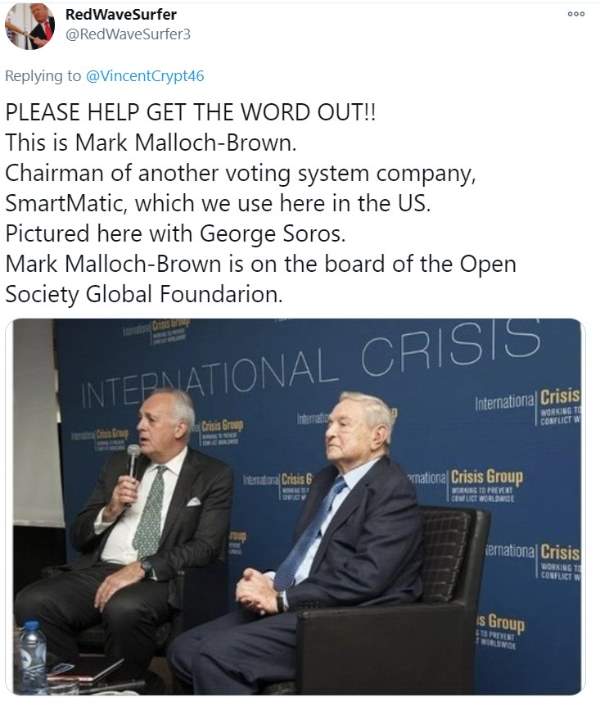 This meme marked yet another attempt to falsely link Soros to the company, upon which the conspiracy theorists of QAnon and the far right are trying to heap blame for Trump’s loss.

Prior to the 2016 presidential election, right-wing blogs falsely claimed that because Malloch-Brown served on the board of Soros’ Open Society Foundation (which is true; the two men are also among those serving on the board of the International Crisis Group), Smartmatic voting machines would be used “to rig elections in 16 states” in favor of the Democratic Party’s presidential nominee that year, Hillary Clinton.

The claim that Smartmatic “switched votes” from Trump to the 2020 Democratic nominee and President-Elect Joe Biden, has also been thoroughly debunked — to the point that right-wing broadcasters like Fox News and Newsmax aired segments debunking their own ginned-up claims under threat of legal duress. According to Newsmax’s on-air statement:

There are several facts our viewers and readers should be aware. Newsmax has found no evidence either Dominion or Smartmatic owns the other, or has any business association with each other.

We have no evidence Dominion uses Smartmatic’s software or vice versa.

No evidence has been offered that Dominion or Smartmatic used software or reprogrammed software that manipulated votes in the 2020 election.

Smartmatic has stated its software was only used in the 2020 election in Los Angeles, and was not used in any battleground state contested by the Trump campaign and Newsmax has no evidence to the contrary.

Dominion has stated its company has no ownership relationship with the House Speaker Nancy Pelosi’s family, Sen. Dianne Feinstein’s family, the Clinton family, Hugo Chavez, or the government of Venezuela.

Neither Dominion nor Smartmatic has any relationship with George Soros.

Smartmatic is a U.S. company and not owned by the Venezuelan government, Hugo Chavez or any foreign official or entity.

So while the photograph itself does legitimately show Soros and Malloch-Brown, everything else associated with the meme has already been discredited on several fronts, in several ways, by several different entities.