As of January 24 2023, there were 36 mass shootings in the United States for the year to date.

On January 24 2023, a Reddit user on r/dankmemes shared a post indicating there had been 36 mass shootings in the United States for the year to date:

New Year, Same Me from dankmemes

Against a meme template from The Simpsons, appended text read:

Only the meme was attached to the post, which was the most popular post on Reddit’s r/all on January 24 2023. The most upvoted comment on the page was a reference to popular satire site TheOnion.com’s recurring “‘No Way To Prevent This,’ Says Only Nation Where This Regularly Happens” article.

The Onion updated and shared a version of the story that same day, after a mass shooting in Half Moon Bay, California on January 23 2023: 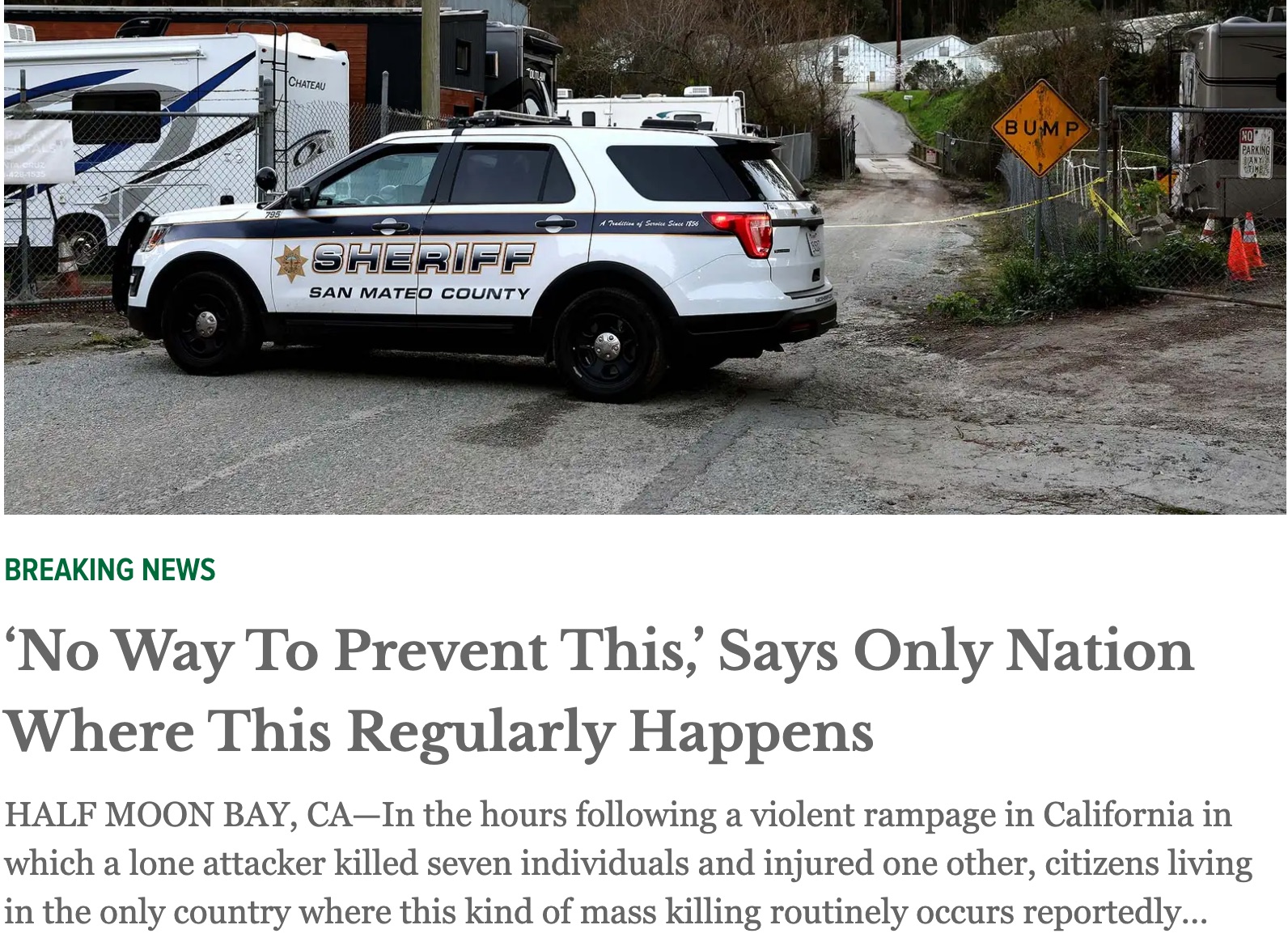 The Reddit post referencing 36 mass shootings in the year to date was shared in the early morning hours of January 24 2023. That afternoon, the New York Times published a news article titled “‘Tragedy Upon Tragedy’: January Brings Dozens of Mass Shootings So Far,” reporting that “at least” 69 people had been killed.

The article’s first few paragraphs reported that there had been 39 mass shootings in January 2023 — not 36 as the meme claimed:

There was the mass shooting near a youth center in Allentown, Pa., and the one at a Subway restaurant in Durham, N.C. Another took place behind a beer hall in Oklahoma City, and another at a strip club outside Columbus, Ohio. Two mass shootings ended parties in different Florida cities.

By the start of the fourth week in January [2023], the tally had grown to include at least 39 separate shootings in which four or more people were injured or killed, according to the Gun Violence Archive, outlining a striking explosion of violence across a range of sites in nearly every corner of the nation that killed at least 69 people.

The deadliest shooting so far took place over the weekend [on January 21 2023] in of [sic] Monterey Park, Calif., a city with a thriving Asian American community where a gunman killed 11 people and wounded nine others inside a popular ballroom dance hall. The authorities said the gunman, who may have targeted his victims and who later killed himself, was a 72-year-old man.

Then, on [January 23 2023], came another deadly mass shooting in California. A gunman, whom the authorities said was a 66-year-old man, killed seven people and seriously wounded at least one other person in Half Moon Bay, south of San Francisco.

The New York Times cited the Gun Violence Archive as a source for their figure of 39 mass shootings in the United States on January 24 2023. When we visited their website (gunviolencearchive.org), the number of mass shootings indeed stood at 39.

One commenter on Reddit claimed that the meme was already out of date:

It’s now 42. They must have made this meme two days ago.

Other commenters on Reddit posted links to Wikipedia’s regularly updated entry, “List of mass shootings in the United States in 2023.” It featured a table of incidents in reverse chronological order (from most recent to least), tallied a slightly higher number of incidents at 43, and introduced the page with information about differing methods for tracking mass shootings in the United States:

This is a list of shootings in the United States that have occurred in 2023. Mass shootings are incidents involving several victims of firearm-related violence. The precise inclusion criteria are disputed, and there is no broadly accepted definition.

Gun Violence Archive, a nonprofit research group that tracks shootings and their characteristics in the United States, defines a mass shooting as an incident in which four or more people, excluding the perpetrator(s), are shot in one location at roughly the same time. The Congressional Research Service narrows that definition to four or more killed and excludes the injured who survive. The Washington Post and Mother Jones use similar definitions, with the latter acknowledging that their definition “is a conservative measure of the problem”, as many shootings with fewer fatalities occur. The crowdsourced Mass Shooting Tracker project applies the most expansive definition: four or more shot in any incident, including the perpetrator.