A Newsweek profile of Abedin includes even more detail about her association with the Journal of Muslim Minority Affairs, and her family’s ties to Saudi Arabia.

Abedin’s parents spent their careers at Saudi Arabian universities. Abedin’s mother, Saleha, is a sociologist and vice dean at a women’s college in Jeddah. Her late father, Syed, helped start an international journal devoted to the Muslim diaspora in non-Muslim lands, called the Journal of Muslim Minority Affairs. Abedin worked part time at the Journal between 1998 and 2009, until she went to the State Department. Right-wingers see evidence of a possible sleeper in that association, as well as in the fact that she served on the board of a Muslim Student Association at George Washington University that, a few years after she left, was advised by Al-Qaeda-affiliated cleric Anwar al-Awlaki.

But congressional Republican leadership swiftly shut down Bachmann for alleging links between Abedin’s family and the Muslim Brotherhood. Abedin has said little about her upbringing in Jeddah, other than that her father instructed her to read a lot of English novels and that she watched Christiane Amanpour and decided to become a journalist. A former high-level State Department staffer, who worked closely with Abedin, said she never expressed any opinions about Middle Eastern politics or Islam, other than occasionally helping organize Muslim holiday celebrations at State.

For its part, the Journal of Muslim Minority Affairs describes itself as a scholarly journal that studies Muslim communities in non-Muslim societies:

Journal of Muslim Minority Affairs is the only scholarly journal studying Muslim communities in non-Muslim societies. It provides a wealth of information about these communities that cannot be found anywhere else in documented form.  It has opened up a new area of specialization in minority studies with original articles addressing the minority condition from the historical, demographic, social and economic perspective. Our research interests extend to include non-Muslim minorities living in Muslim societies, interfaith dialogue with the objective of promoting understanding, and the study of Muslim minority women who face particular and complex challenges to their minority existence while maintaining their Islamic identity. The Journal has indeed pioneered the way in examining theoretical and conceptual issues that define and explain the minority experience.

Arguments that the journal is “radical” often center on an article published in 2002 that allegedly “blamed” the United States for the 9/11 terrorist attacks. The article has been quoted selectively, and the full version doesn’t appear to be readily available online, so it’s hard to gauge the article’s content from odd bits and pieces and partial quotes that have been posted. However, the opening of the article seems to indicate that it’s point is more nuanced than the general idea that “America is to blame for 9/11”: 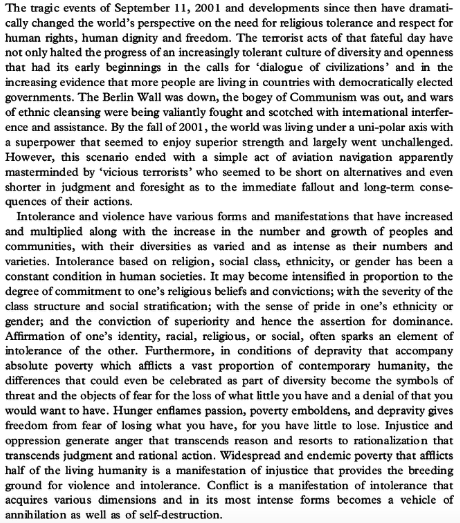 You can read more of the article in question here.
So, it’s true that Huma Abedin worked as an editor of the publication for 12 years. But claims that the publication is “radical” depend on personal perspective. That’s why we’re classifying this one “mostly truth.”