A "bizarre" new strain of strep is causing sinus infections and a characteristic bright red facial rash in March 2019.

On March 3 2019, a Canadian Facebook user shared a “public service announcement” about a purportedly bizarre and new strain of streptococcus aureus going around (post archived here.)

The poster referenced a second post of hers (archived here) about the purported strain of strep, as well as a February 26 2019 post by a woman in Idaho (archived here.) The post proclaimed:

**Public Service Announcement – SHARING THIS** – THIS IS NOT ME! – This is my friend Kendall Stephens.. from Ontario Canada.. and the photos of the Little boy are from Ashlee Hawley in Idaho..

[https://www.facebook.com/ardenh/posts/10218467141740426] .. I shared her post above this one… There is a very bizarre strain of Strep going around! It’s in the sinus cavity.. please share far and wide so other know what to look for.. if you get a red rash type hue to your skin across your nose and on your cheeks.. get to a doc ASAP! Antibiotics are needed to treat this! 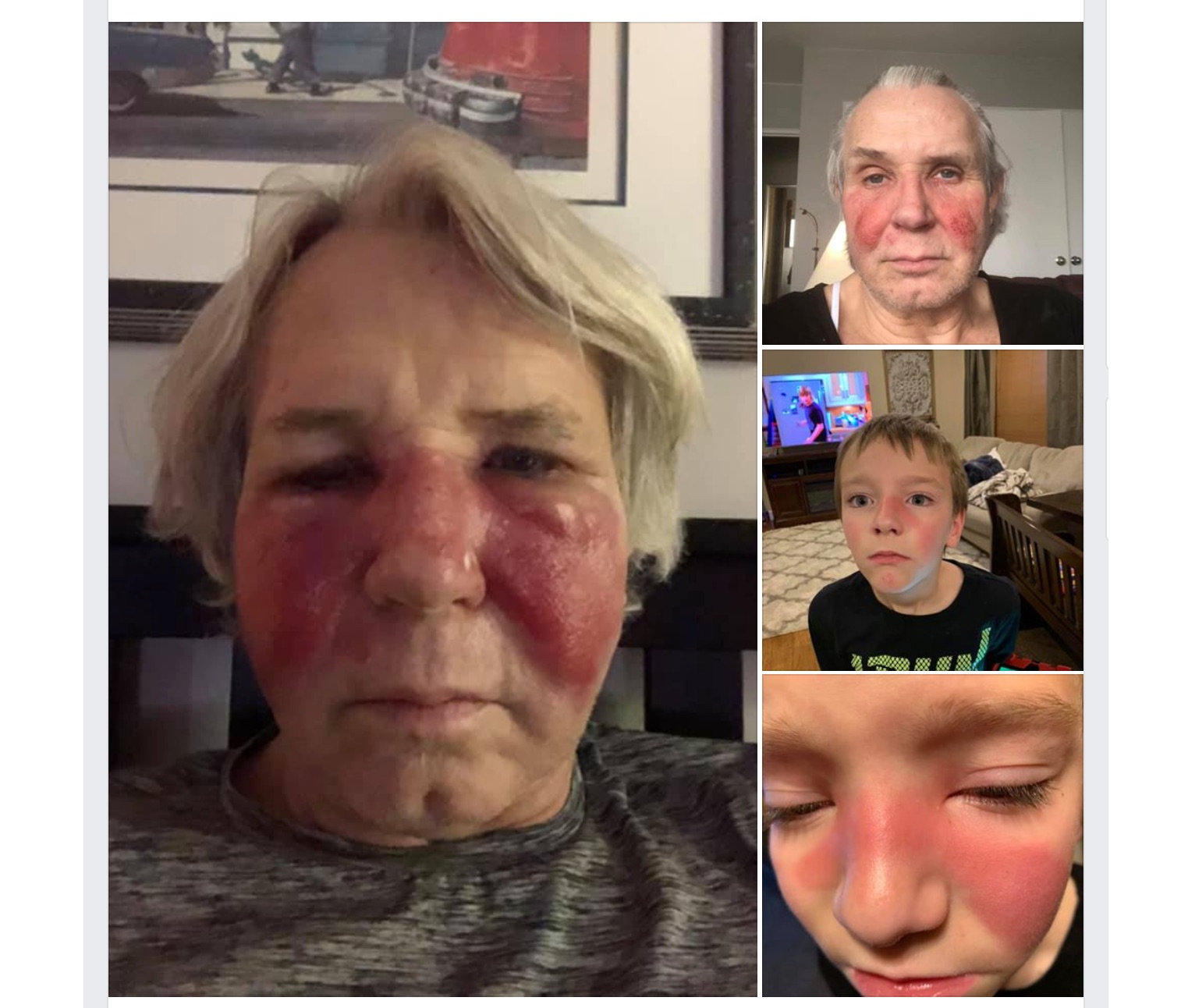 Okay folks here is a heads up for anyone who may see something strange and wonder what it may be like we did. Coop had a strange mark across his face that we thought was compliments of his little brother… After seeing personal physician who gave him a steroid that only made it worse since he didn’t know what it was, we came to the ER at eirmc where they determined he had strep throat but in his sinuses and obviously in his face. It could have been really bad had we not came in, they told us it will continue to migrate through there eyes and into their brain if not treated. They believe we caught his in time but please take this and show as far and wide as you can. It may save someone’s babies. ❤️❤️❤️. Update… we have him home now and he is doing much better! Thank you all so much for the prayers and shares, I have no doubt this will help someone get treatment much quicker than they may have without seeing this.

All of the posts showed images of a grown woman and a young boy. Both individuals appeared to have a red rash in a “butterfly” shape across their nose and upper cheeks corresponding with their sinuses. The posts lacked a name for the “bizarre strain” mentioned, any links to news stories or journal articles providing more information, or any information that could assist readers concerned about this purported “new” illness.

The distinctive butterfly-shaped rash shown is also known as a malar rash, and it can be a symptom of many health issues from lupus to erysipelas. Without citations or other obvious symptoms, it is difficult — and would be irresponsible — to say definitively whether the rashes in these photographs showed a symptom of a “new” type of infection.

We searched reports for anything about new types of strep infections, but the only related items were about yearly outbreaks of strep throat. Harrisburg, Pennsylvania’s WHTM-TV reported localized outbreaks submitted by staff at regional urgent care clinics, but with the bacterial infection as a secondary concern:

We are seeing patients with complaints of nasal congestion, sinus pain and drainage. Patients typically present around day 3-5 when symptoms are at a peak. Typical viral sinus infections last 10-14 days. If symptoms persist or worsen after an improvement it would be important to do a careful physical exam to determine if a bacterial infection is noted. A fever, cough, headache and sinus pain is common. Treatment includes good symptom management like antihistamines, intranasal inhaled steroids and nasal saline flushes.

However, that report linked to a description of a simple viral sinus infection in which nothing “new” or “bizarre” was apparent. Almost every other reference to streptococcal infections which can manifest with a facial rash referenced scarlet fever or scarletina as the cause for those symptoms:

Streptococcal infections are caused by any one of several species of Streptococcus. These gram-positive, sphere-shaped (coccal) bacteria cause many disorders, including strep throat, pneumonia, and wound, skin, heart valve, and bloodstream infections … Symptoms may include red and painful swollen tissues, scabby sores, sore (strep) throat, and a rash, depending on the area affected.

Scarlet fever: A rash appears first on the face, then spreads to the trunk and limbs. The rash feels like coarse sandpaper. The rash is worse in skinfolds, such as the crease between the legs and the trunk. As the rash fades, the skin peels. Red bumps develop on the tongue, which is coated with a yellowish white film. The film then peels, and the tongue appears beefy red (strawberry tongue).

We were unable to find any material addressing streptococcal bacteria in the sinuses as its own discrete issue. Typically, such results were about opportunistic viral or bacterial sinus infections and strep throat contracted concurrently due to a weakened immune system:

Another reference entry on Acute Bacterial Rhinosinusitis (ABRS) did not mention a facial rash as part of the cluster of symptoms associated with it. Neither did a 2019 study on ABRS symptoms. However, the reference material we located was from 2009 (not “new”) and the symptoms were described as rarely observed:

Although a form of strep that is “new” and “bizarre” resulting in a facial rash remains possible, no news reports or reference material substantiated that claim. This rash could be caused by myriad issues such as lupus, erysipelas, or scarlet fever, none of which can be characterized as new or bizarre.