On January 30 2019, this meme (archived here) appeared on Facebook, containing a claim (without sources or citations) that migrants in a caravan carried a frightening ailment known as “derma chronic autoimmune disease.”

THIS IS WHAT THE MEDIA WOULDN’T SHOW AMERICA! MAKE SURE THAT YOU DO!

Facebook users complied, sharing the image more than 15,000 times by March 2019. Although the image was sharable, it was not open to comments; the original poster shared no text alongside the image.

Another version of the meme was picked up by aggregation site me.me one day prior to the Facebook post, but in that version a comment is added to the text. This iteration was shared to Facebook on January 27 2019 (archived here), and was shared 25,000 times. It appeared to have been sourced from a private Instagram account: 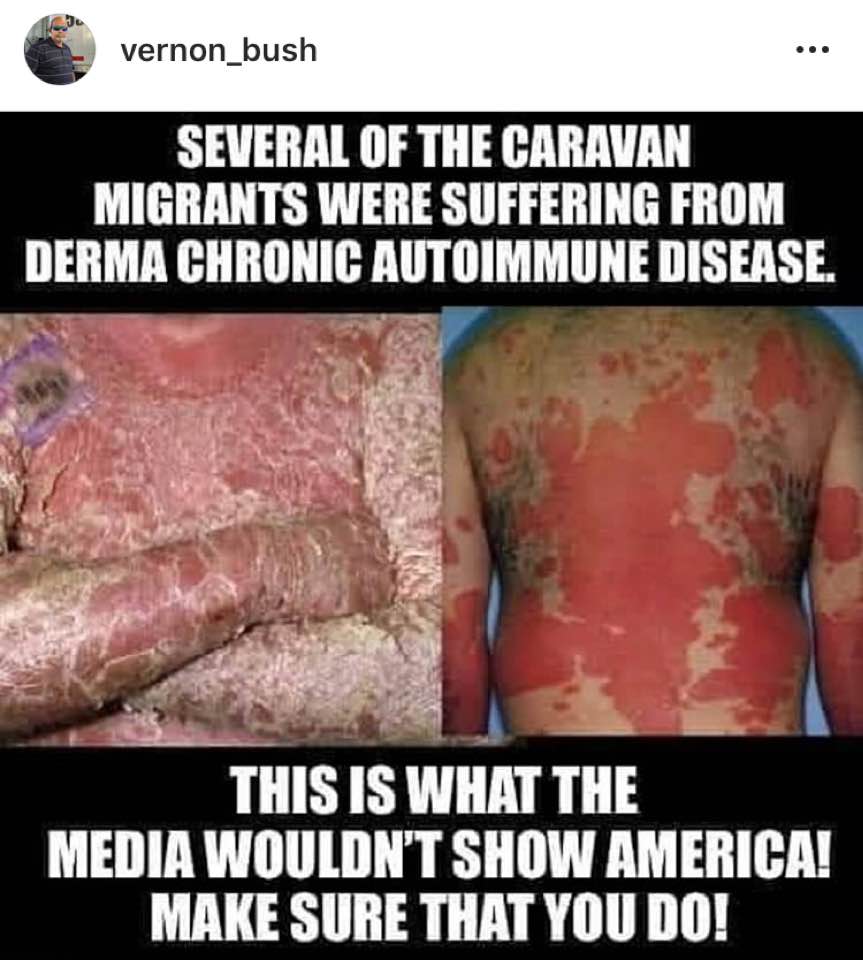 A first point to note here is that autoimmune conditions as a whole are typically not contagious. According to Boston Children’s Hospital:

The exact reason that [patients’] immune systems begin attacking their own bodies is still a mystery. We do know that autoimmune diseases are not contagious, and they don’t appear to be caused by any one thing in particular.

A second crucial point is that “derma chronic autoimmune disease” does not appear to exist, at all and every search result for that term pointed back at the meme or related content. Many commenters linked to a since-removed or moved KVOA item published on January 25 2019, “Migrant With Flesh-Eating Bacteria Detained at US Border.” The article was actually from Associated Press, which reported:

Flesh-eating bacteria are a rare condition called necrotizing fasciitis that spreads quickly and can be fatal. The bacteria usually gets into the body through a minor cut or scrape and can cause a serious infection that can destroy muscle, skin and other tissue.

Sometimes surgery is needed to remove the infected area. It’s rare for the infection to spread to other people.

The Centers for Disease Control and Prevention reiterates that necrotizing fasciitis is rarely transmissible between people, and us typically contracted via a scrape or other break in skin. But the condition described in the meme was not flesh-eating bacteria.

Other commenters linked to yet another meme from a heavy-on-disinformation Facebook page called “The IAC Project Immigration Page” (archived here, original here, archived here) claiming that “cases of flesh eating bacteria” were found among immigrants.

That image was lifted from an August 2014 Reddit r/pics post, “Flesh-eating bacteria virus is a biiitch!” Notably, the post did not appear to have been shared by the subject of the image, and other posters speculated that it did not even show the condition. The origin of the image is unknown. The image on the left side of the meme was shared to Imgur in December 2016, and a concurrent thread appeared on Reddit’s r/WTF. It was titled simply “Psoriasis,” and had no connection to immigration or any caravan.

“Derma chronic autoimmune disease” does not exist, and autoimmune conditions are typically not contagious. The images used in this meme and related comment threads were taken directly from Google image search, and showed unrelated cases of psoriasis or other unstated illnesses that were completely unrelated to the caravan. Additional articles and images purporting to show an instance of flesh-eating necrotizing fasciitis again used old, unrelated images and referenced a condition that is typically not contagious. Nevertheless, no instances of “derma chronic autoimmune disease” (which, again, does not exist) were reported in relation to caravans of immigrants.

Variation, April 10 2019: AFP published a fact check about a similar image-based rumor asserting that an immigrant with a “rash” had been found to be infected with “smallpox”: 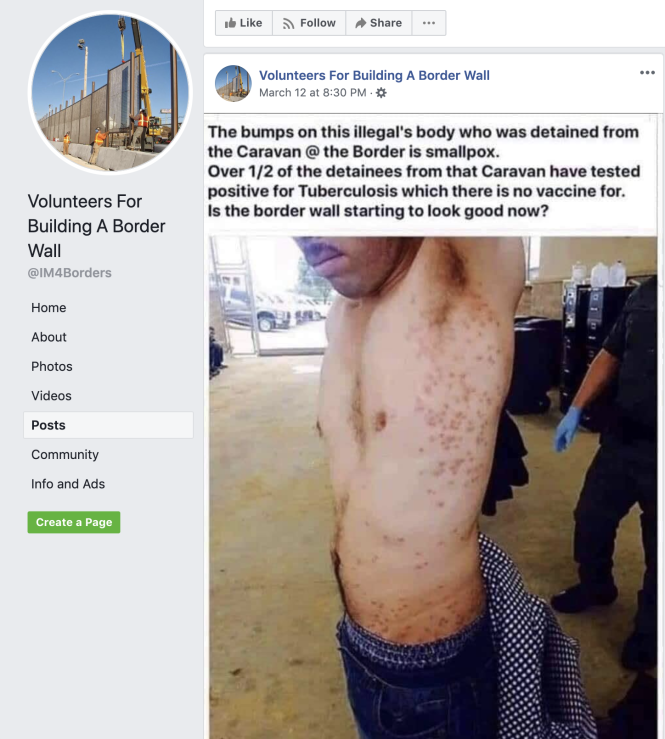 Once again, the claim was pure disinformation. A reverse image search proved the photograph was published in 2014 in a Houston Chronicle article, “Photos show logjam of immigrants detained at government facility.” The individual depicted was not part of a “caravan,” the image was five years old in 2019, and it did not depict smallpox or tuberculosis.