A photograph shows a memorial for aborted babies with an angel crying over the empty cradle of the infant that it was supposed to guard.

I shared this picture a few minutes ago, then about 5 minutes after I shared it, the post was removed from my page and also from the page of who I shared it. The statue represents a guardian angel who is crying over the crib of the baby it was supposed to guard but the baby was aborted.

We could not help but observe that the post had actually not been deleted as of late March 2019. Other versions of the claim circulated on sites like Pinterest with a slightly different caption: 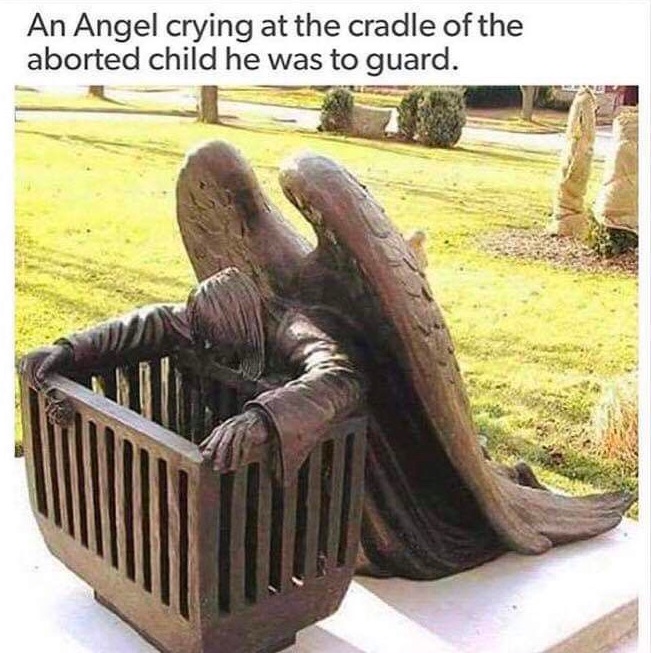 That version was captioned:

An Angel crying at the cradle of the aborted child he was to guard.

An identical version of the text and image above was shared to Reddit’s r/4chan in June 2018, and the image captioned “empty crib” was shared to Imgur at roughly the same time as the Facebook post linked above. The earliest appearance of a related image we were able to locate was from January 2016, when it appeared in a Tennessee newspaper:

This “I knew you in the womb” bronze statue sits outside the entrance to Our Lady of Fatima Catholic Church, where a Celebration of Life and Remembrance will take place [in January 2016].

In June 2016, a Canadian anti-abortion site posted about plans to install a version of the statue as a “monument to Canada’s unborn children.” However, abortion was not explicitly mentioned in that post:

MyCanada is working with supporters to install a national monument to Canada’s unborn children. The bronze sculpture, created by Canadian-born artist Timothy Schmaltz, features an angel weeping over an empty crib. Titled “I Knew You in the Womb”, this will be a beautiful testimony to the value of the unborn. The organization hopes it “will also be a place for Canadians to pray, mourn and pay their respects to the deceased unborn.”

A short description of “I Knew You in the Womb” on the artist’s website explains:

An angel weeps over an empty cradle, offering a memorial for any unborn children making it a very powerful monument to the unborn.

A separate page for miniatures of the image states that it is “a powerful pro-life image and a touching memorial for any children that have been lost.” In a video, Schmaltz says he was inspired to create the sculpture in 2013. He explains that it is “not necessarily” about abortion, but also that it was prompted by “abortions and miscarriages.” In an August 2016 interview with a Catholic outlet, Schmaltz answered a question about overall anti-abortion themes in his work:

Abortion in our culture is a serious concern of mine. I know it from firsthand experience because I am a victim of abortion. I had a relationship when I was in my early 20s, and the woman I was dating became pregnant. We were duped by our culture to do the supposedly “responsible” thing. I experienced what it’s like to sit in a clinic waiting for my girlfriend to have an abortion and what it was like to be with her after the abortion. I saw firsthand the devastation that it did to my heart and to my soul — and also to my girlfriend’s. It was absolutely overwhelming.

When asked about miscarriage, he referenced the sculpture shown above, explaining:

The sculpture of the angel weeping over a cradle was done after my wife miscarried [in 2013]. It was a time when we thought for sure we were going to have our third child, and we were so excited that our kids were going to have another sibling. Then we had to tell them that it wasn’t going to happen. I remember sitting in my studio feeling so empty. That’s when I did the cradle piece, which I called I Knew You in the Womb. When our family experienced that miscarriage, it brought back similar feelings to when I had lost my first child through abortion.

Artist Timothy Schmaltz was inspired to create the sculpture after his wife suffered a miscarriage in 2013. Schmaltz states that it is a “monument to the unborn,” not specifically about, but not excluding,  aborted fetuses. Miniatures of the image are for sale on his site, and at least two versions of the sculpture have been installed in its larger form. Typically, they are as Schmaltz describes — monuments to any sort of pregnancy loss. However, he explicitly states that the imagery is not entirely about abortion.