Figures about the tax burden in European countries are accurately represented in a circulating meme.

On December 18, 2018, a Facebook user shared this meme about tax and purported socialism in several European countries: 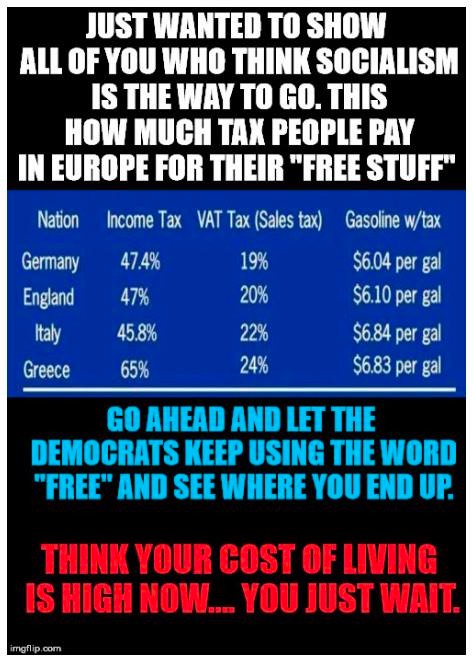 In addition to a chart listing purported figures for Germany, England, Italy, and Greece, its text read:

JUST WANTED TO SHOW ALL OF YOU WHO THINK SOCIALISM IS THE WAY TO GO. THIS IS HOW MUCH PEOPLE TAX PEOPLE PAY IN EUROPE FOR THEIR “FREE STUFF”

GO AHEAD AND LET THE DEMOCRATS KEEP USING THE WORD “FREE” AND SEE WHERE YOU END UP.

THINK YOUR COST OF LIVING IS HIGH NOW…. YOU JUST WAIT.

As is very often the case, the meme did not come with any sources, citations, links, or other information supporting the claims made on the graphic. It wasn’t immediately clear why Germany, England, Italy, and Greece were chosen, or whether the figures cited were then-current. A table listed country, the rate of income tax, value-added tax (sales tax, known as VAT), and the cost per gallon of gasoline including tax for each nation.

By contrast, the United States’s number of tax brackets and attendant percentage rates featured a wider range (seven). The tax rate for its lowest earning bracket ($0 to $9,525/$13,600/$19,050) was ten percent, followed by 12 percent, 22 percent, 24 percent, 32 percent, 35 percent, and 37 percent for the highest earners. The meme seemingly used the highest tax rate for earners in the countries listed, and it would follow that the given relative tax rate for Americans would be the highest bracket as well — 37 percent.

However, all countries listed (and the United States) taxed earnings progressively, and all four plus the United States imposed far lower taxes on its lowest earning citizens. With the United States absent from the comparison, readers were much more likely to infer that the provided statistics were further out of line with American tax rates than they actually are.

Then the meme moved on to sales tax or VAT, taxes not necessarily directly comparable to one another. It claimed that consumers in Germany paid 19 percent VAT on their purchases, Brits paid 20 percent VAT, Italian shoppers 22 percent, and Greek buyers 24 percent. As with income tax rates, the meme only listed the highest VAT rates. In Germany, VAT ranged: zero percent on transport, seven percent on certain necessities (food and medical items among them), and 19 percent on the balance of taxable purchases. The same held for England, where VAT was zero percent on items like food and children’s clothing, five percent on “reduced” items like car seats, and 20 percent on other purchases.

In Italy there were five separate VAT rates: zero percent, four percent, five percent, ten percent, and 22 percent. Items not taxed or subject to lower tax rates included food, dining, and alcohol. Greece’s four VAT percentages were zero, six, 13, and 24 respectively, and food, beverages, and hotel stays were among things taxed at reduced rates. In all four countries listed on the meme, figures were once again cherry picked to produce or highlight the highest VAT rates without mention of a massive range of untaxed or reduced-tax items.

The United States proved a difficult country to measure in terms of sales tax rates, due to the range of difference between different states. However, in 2018 those numbers ranged from zero percent in some circumstances to roughly ten percent in the states with the highest combined sales taxes. By contrast, VAT is described as a more spread out form of consumption tax. Nevertheless, the meme lacked a benchmark against which American consumers could measure their own retail tax against European fiscal policy.

It should be noted that the overarching point of the meme was critique of the impact of socialism on income tax, sales tax, and fuel prices — but the country which ranked first for cheapest gas is Venezuela, frequently derided as having catastrophic socialist policies in American political discourse.

On the same day this version of the meme appeared, Reason.com published an editorial about socialist policy and its effect on residents of Venezuela. The cost of fuel can be taxes as consumption (with Scandinavian countries often referenced in op-eds), but an October 2018 editorial opposing those countries’ trade-offs focused more on income tax:

How do those countries pay for all those benefits?

Start with consumption taxes. Most European countries don’t levy sales taxes. But they do have national value added taxes, which are similar to sales taxes but are less transparent.  In the Nordic countries they average a little over 20 percent, three times Vermont’s sales tax.

This meme presented both an opinion about “socialism” or “free stuff” in Europe alongside purported factual information about how the unspecified “stuff” was funded. It inaccurately provided only the top income tax rates for its four countries (Germany, England, Italy, and Greece), without information about American tax rates for comparison. It utilized the same cherry picking style with respect to VAT rates in those countries, selecting only the highest levels — often inaccurately. Finally, it presented what appeared to be out-of-date gas price statistics for the four countries. Although some of its claims were not entirely off the mark, the meme creatively arranged partial truths, fiction, and inaccuracies to argue its point.