A thin line appearing on one's nail can be an indicator of a type of melanoma.

A Washington state’s barber college story about a warning for a client is true — but readers should be aware that it is a republishing of an account first published in 2017.

She had a straight dark vertical stripe down her nail. She said as soon as she sat down—I need a color dark enough to cover this stripe. The nail salons “diagnosed” her a few different ways. Some said it was a lack of calcium. Some said it was hereditary. At least one had told her it was a blood blister.

But the stripe was later allegedly diagnosed by the client’s doctor as a “very aggressive” type of melanoma that spread to the client’s lymph nodes.

The post, however, first drew attention online in August 2017, when British news outlets picked up the story of the original version, which was published by beauty technician Jean Skinner: 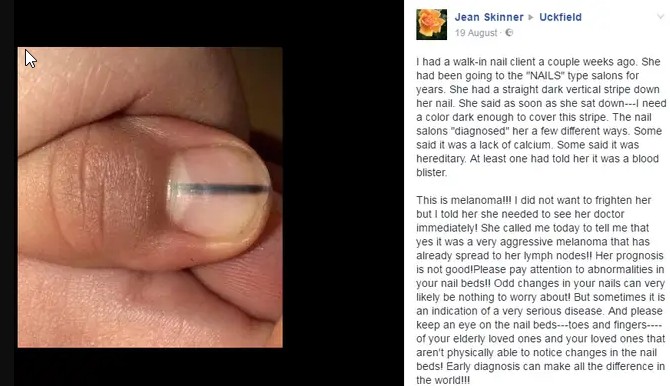 While it is unclear whether Skinner’s entire account was accurate, the British National Health Service did confirm that the appearance of a stripe on one’s nail is worthy of medical attention:

Dark stripes running down the nails (linear melanonychia) are fairly common in black people over 20 years of age. In most cases it’s perfectly normal.

Dark stripes shouldn’t be ignored. This is because it can sometimes be a form of skin cancer that affects the nail bed, called subungual melanoma. It’s important that your doctor checks it to rule out melanoma.

Subungual melanoma usually only affects one nail. It will also cause the stripe to change in appearance. For example, it may become wider or darker over time and the pigmentation may also affect the surrounding skin (the nail fold).

Skinner’s original post can no longer be found on Facebook, but her cautionary tale continued to receive coverage from American media outlets as recently as January 2019.

In May 2019, nail melanoma received more attention when Karolina Jasko, who won the Miss Illinois USA pageant a year earlier, revealed that she had also been diagnosed with the disease after being treated for an unrelated infection. Jasko’s thumbnail was ultimately removed in order to stop the melanoma from spreading.

“The doctors originally thought they would have to remove my whole thumb, and you never realize how much you use your right thumb until you think about losing it,” she told the American Academy of Dermatology. “And if I had waited any longer to see a doctor and have my first surgery, the melanoma could have spread through my whole body, and it would have been a lot worse.”