A video proves that a Starbucks Venti cup (20 ounces) is suspiciously similar in volume to a Starbucks Grande cup (12 ounces.)

That iteration racked up more than five million views in just one month, and a copy shared by a user on August 29 2019 received a further 2.6 million views as of September 12 2019. Together, the clips had been viewed nearly eight million times. The first video, presumably the original, was shared by a Spanish-language marketing page.

In both clips, an individual in a black shirt is holding what appears to be a Grande (cold) Starbucks cup filled with water. They slowly pour the contents of the Grande cup into a Venti (cold) cup. The original video’s description did not state that the respective sizes were 20 ounces for Venti and 12 ounces for Grande, but the second did. A pinned comment by the second sharer on his video urged viewers to avoid Starbucks in favor of independent coffee shops.

Of first note is a claim made in the title-like portion of the second iteration of the video: that Starbucks Grande cups contain 12 ounces, and Venti cups contain 20 ounces. As presented, the difference was eight ounces, or one cup in American fluid ounces measurements.

According to Starbucks, a Grande both cold and iced contains 16 ounces, and a Venti (cold) contains 24 ounces. The purported difference of eight ounces was accurate, but the overall sizes were not. (A hot Venti is 20 ounces; roughly translated, “venti” means “twenty” in Italian.)

Another aspect of the clip observed by many commenters was that the Grande cup was filled to the absolute top, in a manner several deemed completely unlike the actual serving practices of Starbucks baristas. As presented, even putting a lid on the cup may have caused spillage. Ice was not factored into the “experiment.”

On September 4 2019, a thread about the viral Grande vs. Venti video appeared on Reddit’s r/Starbucks, a subreddit for Starbucks’ employees (called “partners” in the chain’s parlance). Titled “First video went viral on FB. As a partner, I thought it might be faked. Second video was filmed at work today. Can’t believe everything you see on the internet I guess,” the post featured an excerpt from the first video and an attempt to replicate its results behind the Starbucks counter:

First video went viral on FB. As a partner, I thought it might be faked. Second video was filmed at work today. Can’t believe everything you see on the internet I guess. from starbucks

Cups shown in the second half of the video (the attempt to replicate) featured a slightly different Starbucks logo — another indication that the first video may have been filmed outside the United States. Multiple baristas on the same subreddit reported that sizes for Starbucks cups differ in Europe:

According to additional comments, not all Starbucks sizes in Europe were different, with one notable exception. The Venti cup (20 ounces hot and 24 cold in the US) was 20 ounces for both hot and cold in the UK and Europe:

Assuming that the original Spanish-language marketing firm video was contrasting two Starbucks cups from outside the United States, the difference would be four ounces, not eight. Moreover, the Grande cup tapered significantly less from bottom to top; the size of the Venti was narrow at the bottom and much wider at the top. With those details in mind, a difference of four ounces and not eight in a dramatically flared cup seems slightly less compelling.

Going back to the original video’s contents, the top comment on the thread contrasting the clip with an attempt to replicate it indicated that the first video might be slightly misleading. Of the person in the video, the Starbucks employee claims:

He pushes against the cup with his inner thumb knuckle in the first video. It’s super apparent at 12 seconds.

It is impossible to say with certainty if that observation was correct, but on a second review of the video we took note of the portion cited. And it does seem that the pourer is indenting the cup with his thumb, creating a slight bend in the otherwise straight side of the cup (emphasis ours): 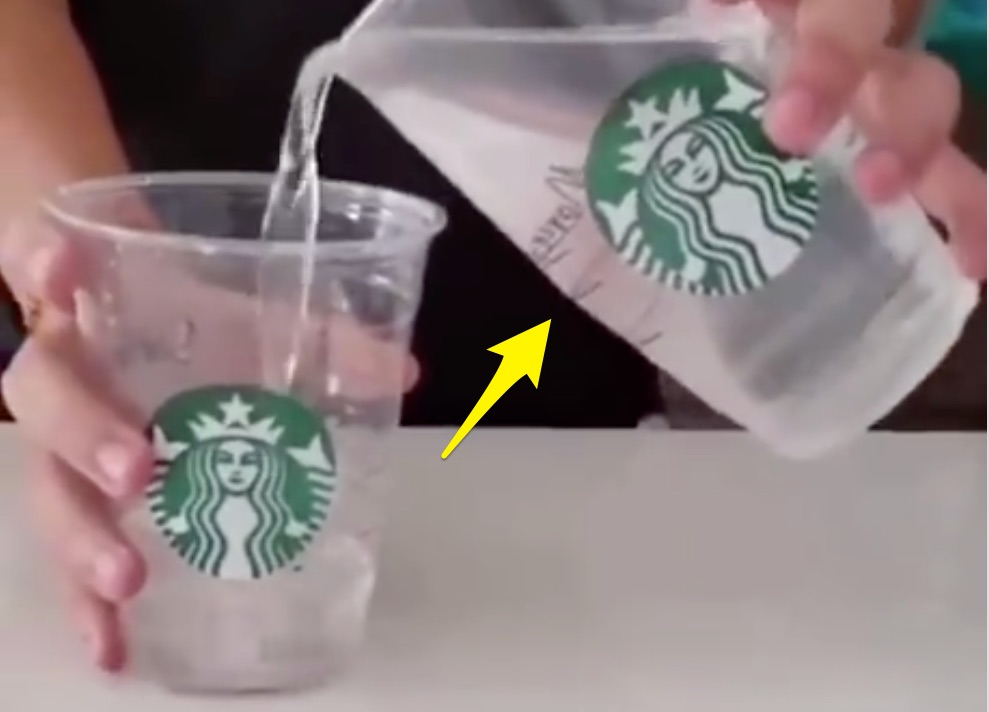 It looks like a cup from another country. I was in mexico and their venti is the same as the one in the video and it’s about 16oz

Another stray observation is that both the original sharer (a marketing firm) and the second (a Facebook meme-centric profile) seemed to have interests in producing viral content. Starbucks is popular worldwide, and a suggestion of perfidy was content almost certain to go viral. Therefore, “proving” Starbucks’ drinks were not what they appeared to be is almost guaranteed likes, shares, and engagement incentivized by Facebook.

Starbucks has been previously accused by customers of under-filling drinks. In a response to a 2016 lawsuit, representatives for the chain explained that the overall composition of Starbucks drinks was subject to myriad factors and facets of various preparation. A customer’s requests with respect to ice (or no ice), foam, extra shots of espresso, and other modifications made the number of variables quite high:

“Hand-prepared beverages increase the likelihood of variations, as disclosed in the nutritional section of our website,” the statement said. “Customers often tell us how they want their beverage prepared (e.g. with room, extra foam), therefore beverage volumes are largely collaborative. If a customer is unhappy with their beverage preparation then we are happy to remake it to their satisfaction.”

Starbucks described the volume of any given drink “largely collaborative” based on those requests. Coverage of the suit’s merits invariably made mention of the fact that Starbucks’ practices in selling iced or hot beverages was under the oversight of “federal and state” agencies. Shorting customers with misleading cup size would open the chain up to a “range of federal and state violations, including fraud, false advertising and negligent misrepresentation.”

This video was not produced by Starbucks and is not representative of the approach our highly skilled baristas take to prepare and serve handcrafted beverages for our customers. Starbucks offers beverage sizes and guidelines, which are regularly communicated to our store partners, to ensure a consistent customer experience.

In short, two separate viral Facebook posts of the same video purportedly demonstrated a misleadingly small difference between a 12 ounce Grande drink and a 20 ounce Venti drink, a supposed difference of eight ounces. The original video (and its copy) appeared to have been produced outside the United States, where a Venti drink is 20 ounces  (not 24 as in the United States). And Grande drinks are actually 16 ounces, not 12, making the actual difference four ounces, not eight. In addition, the Grande cup is filled to capacity (unlike how Grande drinks are served), and in a questionable portion the pourer seemed to be squeezing the Venti cup to further exacerbate the supposed differences. Finally, modifications such as ice, foam, and extra shots (or room for milk) all affect the final fill level of any Starbucks drink.