The viral YouTube video "Package Thief vs. Glitter Bomb Trap" is authentic and not staged in any way.

Someone stole a package from me. Police wouldn’t do anything about it so I spent the last 6 months engineering up some vigilante justice. Revenge is a dish best served fabulously. Vid link- https://t.co/9OjD6ETdbZ pic.twitter.com/u4o0doWglr

The clip proved immediately popular on social media; many readers were awaiting their own holiday deliveries and fearing package theft. CNN, The Daily Dot, and Engadget were among outlets reporting the events shown in the video.

In a YouTube video titled “Package Thief vs. Glitter Bomb Trap”, Rober explains after police refused to help him in his crusade against parcel thieves, he was inspired to engineer his own form of vigilante justice. The result? A parcel disguised as an Apple Home Pod which, when opened, sprays a “butt load” of fine glitter into the parcel’s vicinity, and repeatedly pumps fart spray into the atmosphere for good measure. And the whole thing — the perp’s reaction included — is captured on video.

Although some news outlets bought into the story outright, other denizens of social media sites were not so quick to believe — and rightfully so, as it turned out. On December 19, 2018, BuzzFeed reporter Talal Ansari pointed out some inconsistencies in the story that others had overlooked in their rush to jump on the trending tale:

Not to ruin everyone’s favorite video of the moment, but I’m starting to believe at least *a portion* of the “Package Thief vs. Glitter Bomb Trap” video might be staged. Besides some good points brought up here, https://t.co/9Hk9jeUHqs, I found something else.

This is where the host claims one of the packages was left in a “parking garage.” pic.twitter.com/8cGpwp1SXV

And this is what’s there: pic.twitter.com/nuch2tv9RF

Commenters on SlashDot also expressed some reservations about the video’s authenticity, and several Reddit commenters (including a deleted but archived r/conspiracy poster) were unimpressed by the story:

Ah yes, I too exclaim my exact emotions out loud when It’s just me alone…

A discrepancy described in some posts involved footage that appeared to disappear between the time the video was uploaded and later versions.

On December 20, 2018, Rober cleared up the questions when he shared screenshots of a longer statement addressing both the missing footage and claims that the reactions were staged:

In the statement, Rober affirmed he removed footage which originally appeared between the 6:26 and 7:59 marks in the first iteration of the clip. He said that he confirmed several of the packages were opened by friends of friends who he personally did not know and added that people involved in the video were offered bounties for successful glitter bomb deployments. Rober went on to say he was “gutted” by those developments, and that his credibility “was sort of shot”: 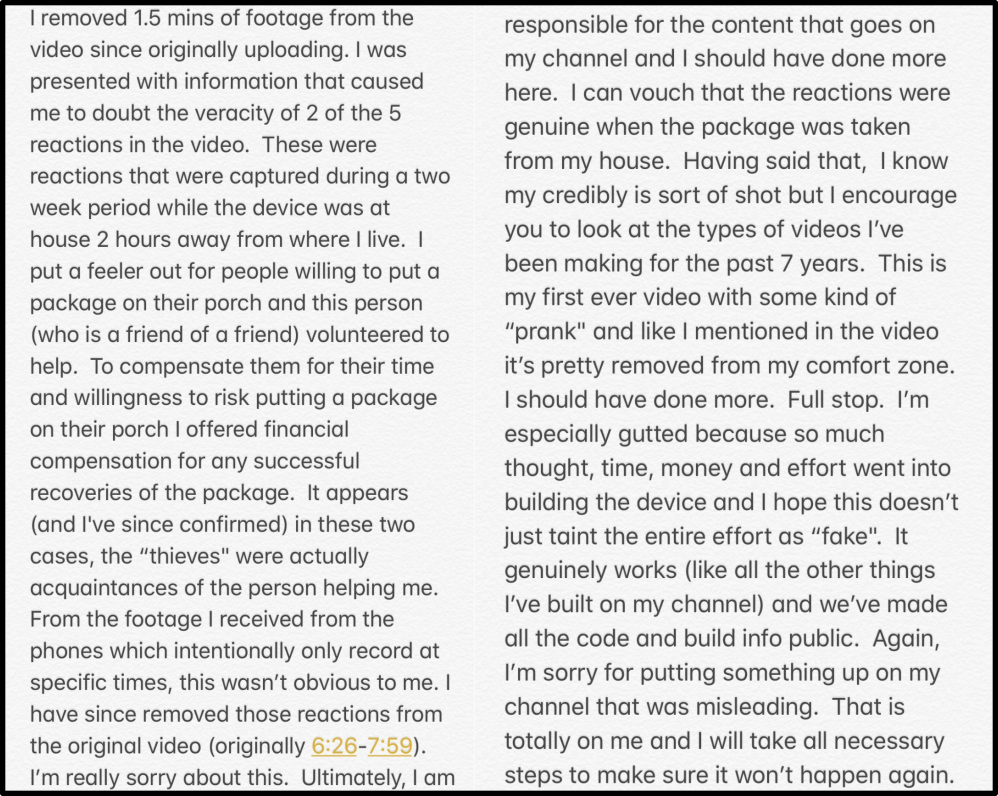 Although Rober maintained that much of the effort behind “Package Thief vs. Glitter Bomb Trap” was authentic, he admitted that portions of the video were not (but maintained he was unaware of the interference by “friends of friends”).

It wasn’t immediately clear how many, if any, reactions captured in the video are in fact authentic, or if the majority of purported glitter bombs were intercepted by friends of Rober’s friends — but the overall video, by his own admission, was not real.