Following news about the dissolution of the Trump Foundation, former Arkansas governor Mike Huckabee tweeted: "Did the Clinton Foundation finally get shut down for selling govt favors to the Russians and anyone else with a checkbook?"

Following news on December 18, 2018 that the Trump Foundation would close, a tweet attributed to former Arkansas governor Mike Huckabee in which he appeared to think that the Clinton Foundation was closing circulated in screenshots on social media.

In the tweet, Huckabee was sharing and commenting on a December 18, 2018 tweet shared by Rep. Eric Swalwell (D-California).The original tweet did not specify which charitable foundation it referenced:

Turns out there was a presidential candidate running a corrupt “charity” foundation. Good thing it was dissolved today.

On Facebook, Huckabee’s purported response circulated in screenshot form. Readers commenting on it often expressed doubt that the tweet was real: 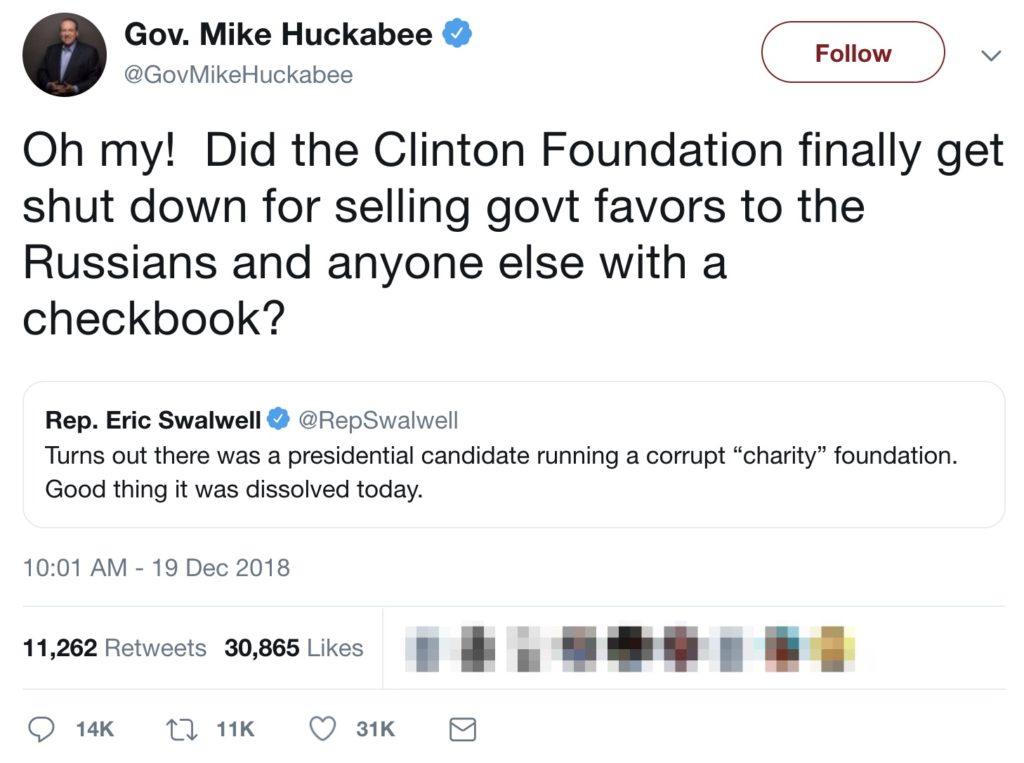 However, a visit to Huckabee’s verified Twitter page revealed that the tweet was indeed legitimate and live as of December 20, 2018. (Archived here.)

Oh my! Did the Clinton Foundation finally get shut down for selling govt favors to the Russians and anyone else with a checkbook? https://t.co/X9C1Uf9CyJ

Many responses to this tweet noted he had shared no corrective commentary in the time passed since originally tweeting the remark, while others thought that it might have been an attempt at humor:

You posted this at 10:00 yesterday, surely by now you’ve read the news or run a Google search, right?

No. The man you actively support just had his charity disolved for illegal activity. The whatabout-Hillary game is getting more ridiculous every day.

Grow the fuck up!

He was trying but it fell like a bomb and made him look as stupid as he is. Bless his heart he is a typical evangelical liar and hypocrite. His daughter is worse. Apple -tree.

Gov. Huckabee did pose a question on Twitter about whether the Clinton Foundation “finally [got] shut down for selling govt favors to the Russians and anyone else with a checkbook,” but did not engage in any discourse to clarify the intent of his remarks. Nevertheless, screenshots of the tweet depicted above are real and unaltered.