Vehicle fuel gauges feature a small arrow on the car's interior indicating the side of the vehicle on which its gas tank is located.

A tweet published in December 2018 reiterated a long-circulating purported “life hack,” in which an easy-to-miss arrow on a car’s gas gauge indicated the side of the vehicle on which its gas tank was located:

How old were you when you realized the arrow on the gas pump in your car shows which side the gas tank is on? pic.twitter.com/Bb7BlD76k5

The tweet alluded to the popular “today years old” meme phrasing, hinting that few people are aware that such an indicator exists on their vehicles.

In June 2017, WPVI published a piece about the tip, as did car insurer Allstate on their blog in August 2012. Advice about gas pump indicator arrows appeared as far back as blog posts published in 2008.

Last week while driving a rental car, I pulled up at a gas station and experienced the dreaded “Oh no!” moment: I had no idea on which side of my car the gas cap was located. If you’re like me, the initial “Oh no!” is followed by a few moments of awkwardly craning your neck out the window in hopes of seeing (or not seeing) the gas door on the driver’s side. More often than not, however, I guess and just pull up to the pump — only to back up and circle around when my guess is wrong.

The item went on to detail the gas gauge indicator tip, but with a caveat — when available, the arrow appears to only be a feature in relatively new cars, and the feature is apparently a courtesy, not a standard:

Good news: The secret to the gas cap location has been on our dashboards all along. If you are driving a newer car (as many rental cars are), then take a look at the arrow by the gas gauge on your dashboard. Depending on your car, it may look like a triangle pointing to the left or right … What about in older cars that lack the arrow? Can gas gauges tell us on which side the gas cap is located? Older cars still have a gas pump icon located near the gas gauge. The pump icon’s handle either extends to the left or right.

So does the handle location indicate which side to pull up next to the gas pump? Unfortunately, this popular Internet rumor has been shot down. Sometimes there is a correlation between the pump handle and the gas cap location, but it appears to be simply coincidence. The side of the handle does not always indicate the side of the gas pump; only the gas gauge arrow, featured on newer models, does.

General images of gas gauges illustrated this disparity. While the Toyota Corolla (model year uncertain) on the left featured the indicating arrow, a 2003 Honda Civic on the right did not: 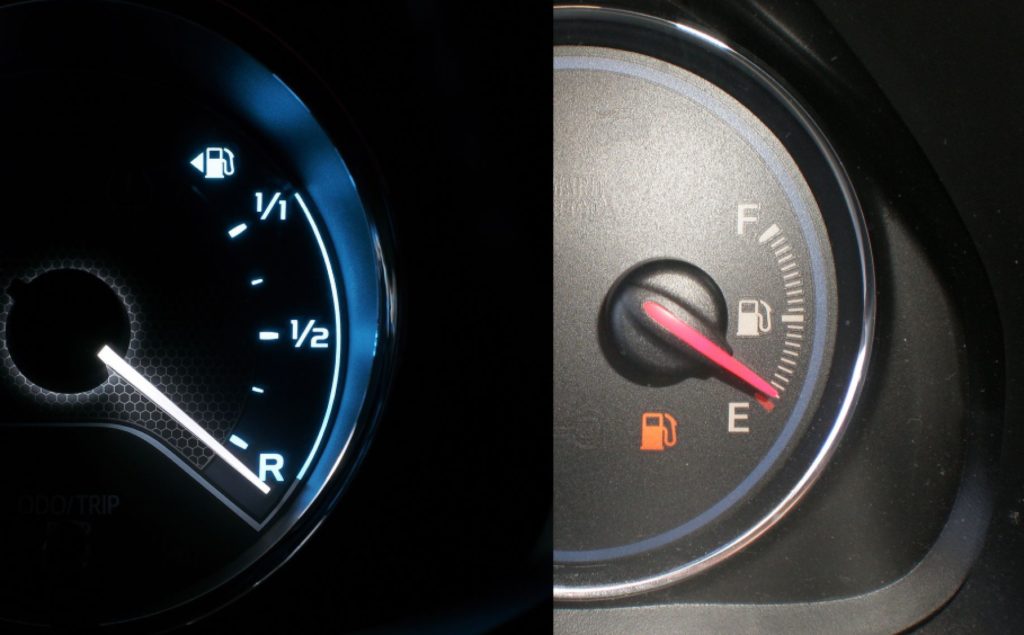 As for the origins of gas gauge arrows, automotive site Jalopnik delved into the disputed genesis of the trend, when it possibly started, and around which year (1997) automakers purportedly began featuring gauge indicators:

The unsung hero/inventor of the fuel filler dashboard arrow is a designer named Jim Moylan, who worked for Ford. The idea came to Moylan in April of 1986, who had to fill up a Ford company car in the rain, and was frustrated when he got soaked because he picked the wrong side. He wrote up a memo with the idea, sent it off to his bosses, and that’s pretty much how it happened.

The bosses saw the value in the (pleasingly cheap-to-implement) idea, and in 1989, the Ford Escort and Mercury Tracer became the first cars to have the little fuel filler-location arrow.

See, while I’m not disputing Moylan’s story—I 100 percent believe he came up with the idea independently—I do think the fuel filler-location arrow has an earlier genesis, and it’s one that, frustratingly, its parent company doesn’t even acknowledge. I think the first example of the fuel filler-location arrow shows up in 1976, on the dash cluster of the Mercedes-Benz W123…

Unfortunately, the tenacious sleuths over at Every Little Thing found that Mercedes-Benz themselves seems to have totally forgotten about this, and thinks that they started putting the little arrow on their dashes with the 1997 G-Class.

An undated blog post cites a Consumer Reports engineer’s claim that a majority of new model vehicles feature the gas pump indicator arrow, but both of those categories were relatively vague. It also follows that a minority of new cars do not feature the indicator near their gas gauges.

Claims about the gas gauge indicator arrow are true. According to automotive experts and consumer advocates, the feature is at least common on “new” vehicles — but we found no clear model year tipping point for widespread inclusion. The tip is likely to help drivers of rental cars, fleets of which tended to be new relative to cars on the road.

Drivers (or borrowers) of older vehicles might not take note of an absent gas gauge indicator until they are already incorrectly parked at a gas pump, but the claim appears to be one that gets more true as time passes.

But in some ways, it also became less true; at the same time the tweet above circulated, a viral video of a woman purportedly trying (and failing) to put gas in an all-electric vehicle made by Tesla made the rounds