On December 15, 2018, a Facebook user shared what appeared to be a screenshot of an article reporting the shocking news that dozens of Japanese scientists had been killed by rebellious artificial intelligence: 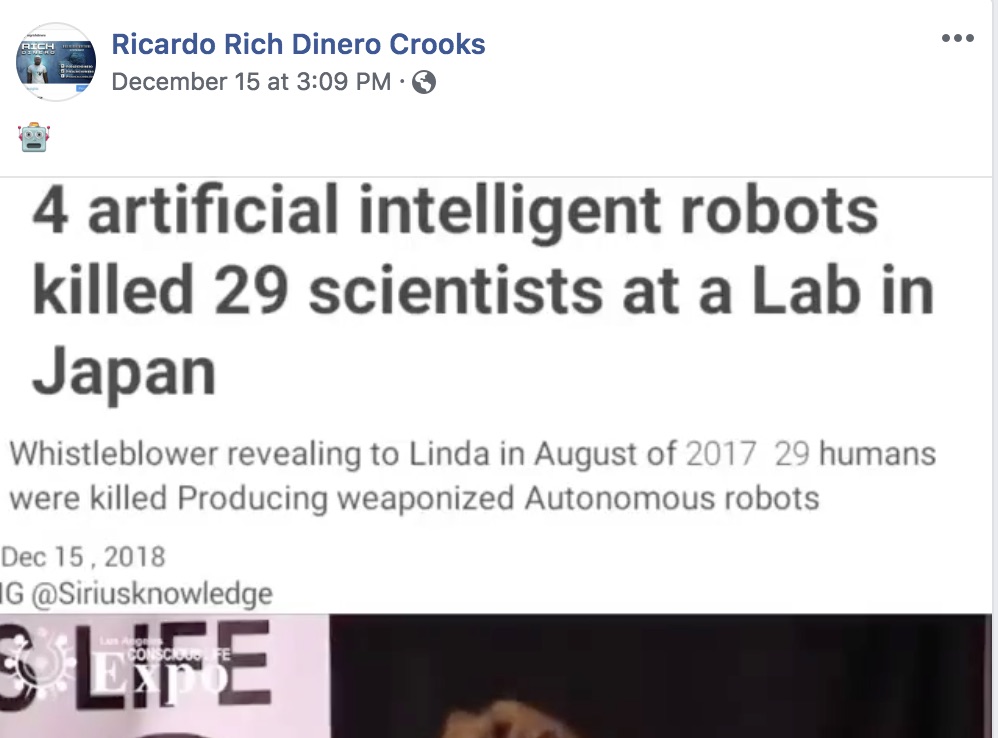 Ex Military Whistleblower reveals to Linda Moulton in August of 2017, 29 humans were killed Producing weaponized Autonomous robots in japan, she mentions what expert researchers in Artificial intelligence such as Elon Musk and Stephen Hawking among others had to say.

Tesla and SpaceX CEO Elon Musk responds to a question by Nevada Republican Gov. Brian Sandoval during the third day of the National Governors Association’s meeting on Saturday in Providence, R.I. Among other things, Musk warned governors that artificial intelligence poses a fundamental risk to the existence of human civilization.

The emergence of artificial intelligence (AI) could be the “worst event in the history of our civilization” unless society finds a way to control its development, high-profile physicist Stephen Hawking said, He made the comments during a talk at the Web Summit technology conference in Lisbon, Portugal, in which he said, “computers can, in theory, emulate human intelligence, and exceed it.”

The trail went relatively cold there, as there were no links to further stories. However, a similar headline was attached to an item published on December 18, 2018 by fake news outlet Huzlers:

JAPAN – 29 scientist were killed by militarized artificial intelligence robots. Japan begun working on creating AI militarized robots back in 2006 Japan denied the programs existence but the proof is inevitable.

Dexter who runs the laboratory managed to escape the fiasco told the story of the accident. Japanese military opened fire on these militarized robots while scientist shut them down but one ran and begun to fix itself downloading files to repair itself via orbit satellite. This was kept secret until a whistle blower confirmed the incident. As of now Dexter’s laboratory is still a secret to his family except for Dee-Dee who is always messing around in there.

Huzlers is a well-known purveyor of falsehoods and satire, and a disclaimer at the bottom of every page on the site reads:

Huzlers is the most infamous fauxtire & satire entertainment website in the world. If it’s trending on social media you’ll find it here!

Its appearance there may have been a case of the hoax news ecosystem feeding off itself as sites all imitated one another; similar content appeared on YouTube and Twitter days prior to the Huzlers piece (and its headline diverged from the Facebook and Twitter posts above.) The video also appeared less than two weeks after an April 5 2018 Guardian article reporting calls for a boycott of a South Korean university’s “collaboration with [a defense] company on autonomous weapons”:

Artificial intelligence researchers from nearly 30 countries are boycotting a South Korean university over concerns a new lab in partnership with a leading defence company could lead to “killer robots” … [Boycott organizer Toby] Walsh was initially concerned when a Korea Times article described [Korea Advanced Institute of Science and Technology] KAIST as “joining the global competition to develop autonomous arms” and promptly wrote to the university asking questions but did not receive a response.

The original source for most versions of the claim appears to be an April 2018 BrainFeed.tv post and linked YouTube video (titled “Whistleblower Reveals 29 Humans Killed in Laboratory Producing Militarized Autonomous Robots!”) In one version, the woman quoted her purported military source as having said:

“This is serious shit, Linda. But you won’t hear about it in the news.”

The woman speaking in the video was identified as Linda Moulton Howe, journalist and conspiracy theorist. In what appears to be the original video, Howe referenced repeated remarks made by Elon Musk before the (purported, untrue) incident in Japan, not in reference to it, which speculated artificial intelligence was humanity’s “biggest existential threat.”

The claim traveled in screenshots and video clips without an article until it was picked up by a disinformation site in December 2018.

The basis of the story was a single individual (Howe) claiming that she received a phone call from an unnamed source in the United States Marines — leaving the possibility that even if the phone call took place as described, the shadowy source was pulling Howe’s leg. But all versions of the story trace back to a single video on a YouTube conspiracy channel in which Howe makes thirdhand claims without proof about a supposed AI bloodbath