Proposed laws in North Carolina will make it so putative rape victims cannot "withdraw consent" once a sex act has started.

Amid a rash of near-total abortion bans in various American states in May 2019, a screenshot of two tweets regarding sexual consent laws in North Carolina caused further confusion on social media.

what the fuck is happening in america right now https://t.co/shIfrbUBrK

In the screenshot, both the deleted tweet and its live response were visible: 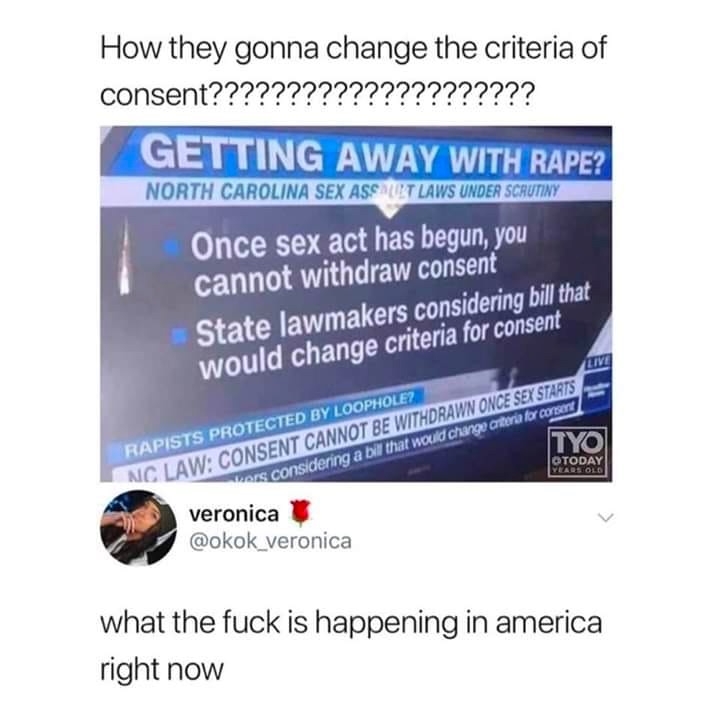 How they gonna change the criteria of consent[?]

A photograph of a television screen displaying what appeared to be a news graphic read:

GETTING AWAY WITH RAPE?
NORTH CAROLINA SEX ASSAULT LAWS UNDER SCRUTINY

RAPISTS PROTECTED BY LOOPHOLE?
NC LAW: CONSENT CANNOT BE WITHDRAWN ONCE SEX STARTS
[… lawmakers] considering a bill that would change criteria for consent

Based on the graphic, readers inferred:

However, some telling portions of the graphic included text questioning if “rapists” were “protected” by a loophole, and another suggesting that (existing) North Carolina laws held that “consent cannot be withdrawn once sex starts.”

Commenters on the one of two tweets that had not been deleted pointed out that the graphic could be read another way:

that's the current law in NC. right now they're trying to change that so that consent can be revoked during sex.

According to a 2017 Fayetteville Observer article, North Carolina’s atypical handling of rape and sexual consent comes from case law that was established in 1979:

Jeff Jackson, a Democratic state senator who represents Mecklenburg County, is working to get the law changed. He said many other women have approached him privately about cases in which they withdrew consent for sex, but the law would not permit the men to be charged.

“Legislators are hearing more and more about women who have been raped and are being denied justice because of this crazy loophole,” Jackson said. “North Carolina is the only state in U.S. where no doesn’t mean no.”

Jackson is the sponsor of Senate Bill 553, which would criminalize the failure to stop intercourse when a woman who had originally consented changed her mind.

In March 2019, the same news organization reported that the 2017 efforts did not result in a change to the law:

Rep. Chaz Beasley and Sen. Jeff Jackson, Democrats from Mecklenburg County, proposed a bill in 2017 to criminalize continued sex after revocation of consent. The General Assembly never acted on the measure.

The same article noted that North Carolina’s handling of rape cases was heavily influenced by that anomalous “loophole”:

This problem [of differing accounts between the accuser and accused] exists nationwide, but it is heightened in North Carolina because of a 40-year-old legal precedent that says a person cannot revoke consent after the act begins. Continuing to have sex after being asked to stop does not constitute a crime.

North Carolina is the only state in the nation where this is true, said Skye David, staff attorney for the N.C. Coalition Against Sexual Assault.

Senate Bill 563 would change that. The proposal, which was filed [in April 2019], would amend state law to say that any person who consents to a sexual act can withdraw consent at any time during the act. The bill would mean any person who continues with the sex will be considered committing “sexual act by force.”

“Law enforcement officers have declined to take out charges because of this law. Fixing this has been on my to-do list since joining the state senate,” Jackson said.

On May 9 2019, The News & Observer reported that Jackson’s effort was unsuccessful:

A bill that would make it illegal to continue to have sex with someone who told the other person to stop has died in a state Senate committee.

North Carolina may remain the only state in the country where someone cannot be charged with rape for continuing to have sex with a partner who told them to stop. It stems from a 40-year-old legal precedent.

Despite the demise of the Senate measure, it remains possible for a similar provision to be added to another piece of legislation. A state representative who has sponsored a separate bill reversing other precedents affecting sexual assaults told Carolina Public Press [in May 2019] that he would not object to the addition of such language to his bill, which passed the House without opposition.

As of May 2019, efforts to change the consent provision in North Carolina law remained unfruitful. Nevertheless, the circulating screenshot about the law appeared to involve a sort of reverse reading of the situation. In 1979, case law established in the state that consent for sex could not be withdrawn with respect to rape prosecution. Lawmakers sought not to enact such a provision, but to overturn it.