PepsiCo’s June 17 2020 announcement it was retiring the Aunt Jemima brand due to the character’s original “Mammy” connotations led to immediate and extensive complaining on social media, such as a copypasta post accusing brand executives of “erasing” the legacy of Nancy Green:

The world knew her as “Aunt Jemima,” but her given name was Nancy Green and she was a true American success story. She was born a slave in 1834 Montgomery County, KY… and became a wealthy superstar in the advertising world, as its first living trademark.

Green was 56-yrs old when she was selected as spokesperson for a new ready-mixed, self-rising pancake flour and made her debut in 1893 at a fair and exposition in Chicago. She demonstrated the pancake mix and served thousands of pancakes… and became an immediate star. She was a good storyteller, her personality was warm and appealing, and her showmanship was exceptional. Her exhibition booth drew so many people that special security personnel were assigned to keep the crowds moving.

Nancy Green was signed to a lifetime contract, traveled on promotional tours all over the country, and was extremely well paid. Her financial freedom and stature as a national spokesperson enabled her to become a leading advocate against poverty and in favor of equal rights for folks in Chicago.

Nancy Green was a remarkable woman… and has just been ERASED by politically correct bedwetters.

A Brief History of the Aunt Jemima Brand

On AuntJemima.com, an “Our History” page features a timeline (archived here) of the Aunt Jemima brand — from its development in 1889, to its first connection with Nancy Green in 1890: 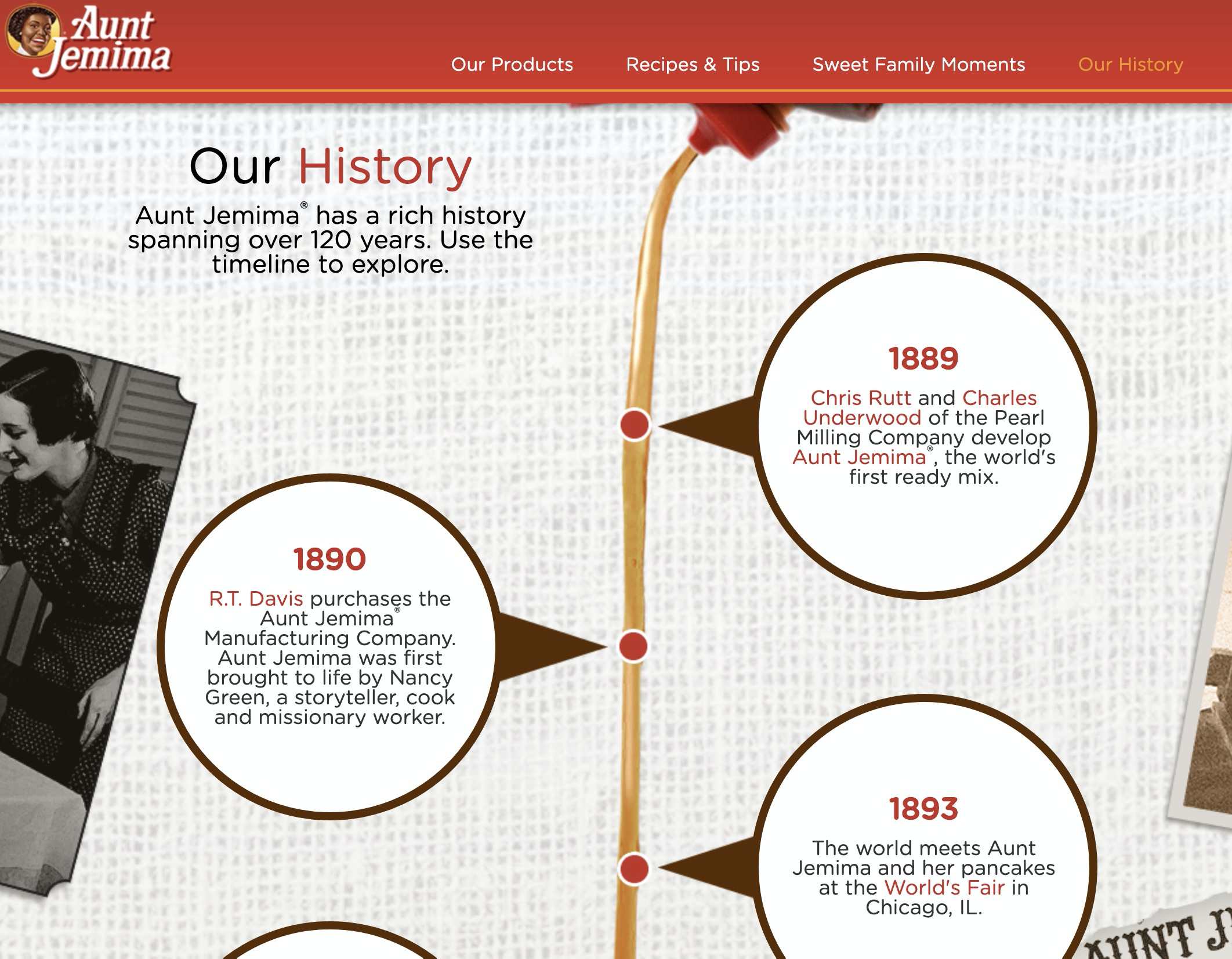 The ensuing timeline featured a number of events from the brand’s history, but didn’t offer much history about Nancy Green. However, the African-American Registry (AAREG) site hosted a detailed entry about Green’s life and fame. Notably, that entry’s title was “Nancy Green, the original ‘Aunt Jemima,’” and it described Green’s life before and after she became known as Aunt Jemima.

Green was born into slavery in 1836, and as the timeline indicated, she was contracted by the company to appear at the 1893 World’s Fair in Chicago as the character:

Green was born a slave in Montgomery County, Kentucky. Chris Rutt, a newspaperman, and Charles Underwood bought the Pearl Milling Company and had the original idea of developing and packaging a ready-mixed, self-rising pancake flour. To survive in a highly competitive business, the men needed an image for their product.

In 1889, Rutt attended a vaudeville show where he heard a catchy tune called “Aunt Jemima” sung by a blackface performer who was wearing an apron and bandanna headband. He decided to call their pancake flour “Aunt Jemima.”

Rutt and Underwood were broke, so in 1890, they sold the formula to the R.T. Davis Milling Company. Mr. Davis began looking for a Black woman to employ as a living trademark for his product, and he found Nancy Green in Chicago. She was 56 years old. The Aunt Jemima Pancake Mix was introduced in St. Joseph, MO.

In 1893, the Davis Milling Company aggressively began an all-out promotion of “Aunt Jemima” at the World’s Colombian Exposition in Chicago. Green, as “Aunt Jemima,” demonstrated the pancake mix and served thousands of pancakes. Green was a hit, friendly, a good storyteller, and a good cook. Her warm and appealing personality made her the ideal “Aunt Jemima,” a living trademark. Her exhibition booth drew so many people that special policemen were assigned to keep the crowds moving. The Davis Milling Company received over 50,000 orders, and Fair officials awarded Nancy Green a medal and certificate for her showmanship.

She was proclaimed “Pancake Queen.” She was signed to a lifetime contract and traveled on promotional tours all over the country. Flour sales were up all year and pancakes were no longer considered exclusively for breakfast.

The world knew her as “Aunt Jemima,” but her given name was Nancy Green. The famous Aunt Jemima recipe was not her recipe but she became the advertising world’s first living trademark. Nancy Green maintained this job until a car crash in Chicago killed her on September 23, 1923. The Davis Company also ran into money problems, and the Quaker Oats Company purchased the Aunt Jemima Mills in 1925.

Green worked as Aunt Jemima until her death in 1923, as the above AAREG biography explained. From that point, there isn’t even a break in the timeline shown above — in 1926, Quaker Oats purchased the brand from the Davis Company, and it continued to exist.

Green died in 1923, and in 1933 — not 2020 — Anna Robinson took over the role of Aunt Jemima. Just over two decades after that, Aylene Lewis started appearing as Aunt Jemima at a titular restaurant in Disneyland: 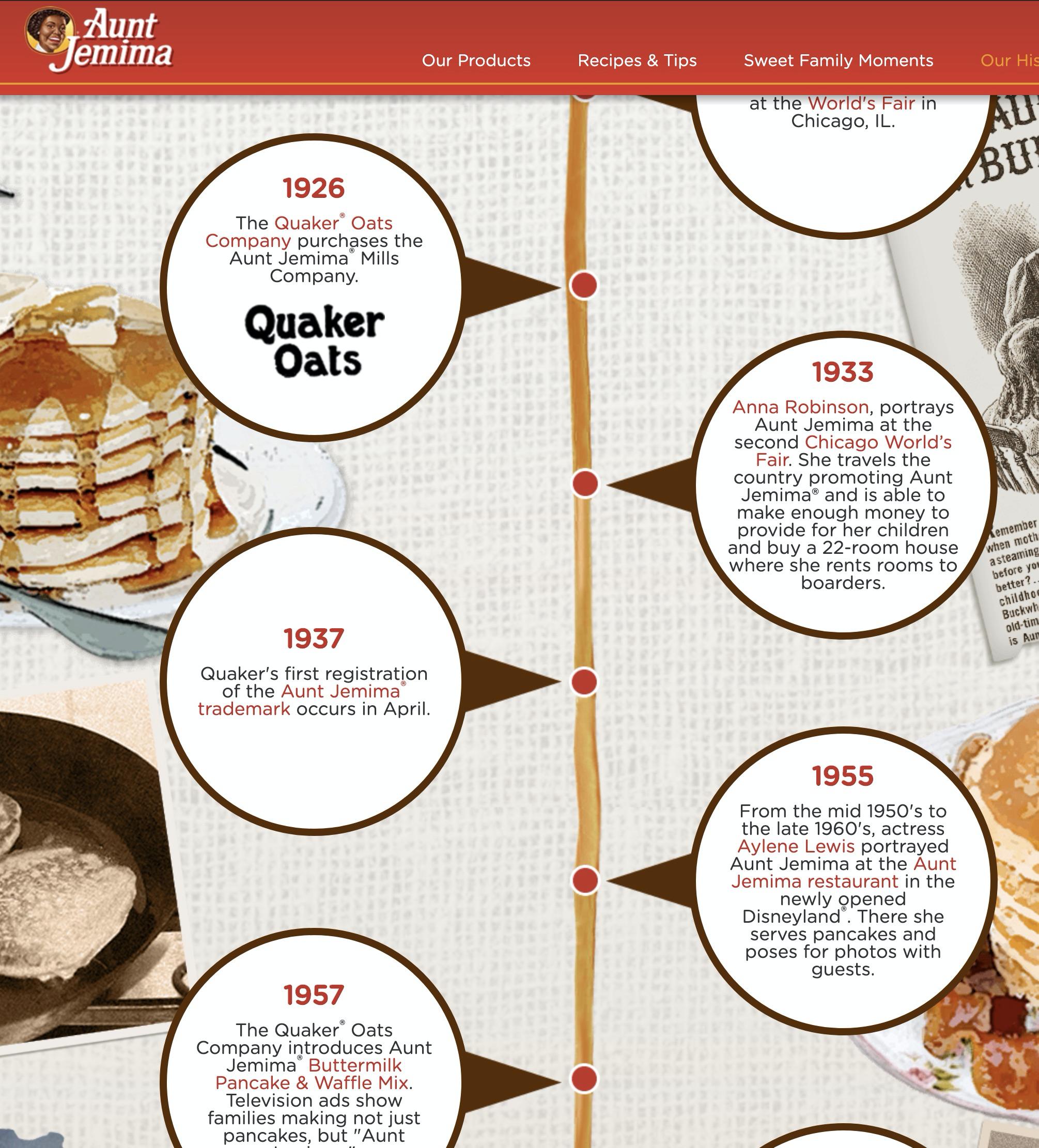 According to the timeline, Lewis is the last identified person to be attached to the Aunt Jemima role. But Aunt Jemima was not done changing with the times — in 1968, she was given a “mod” makeover, and in the 80s, she received a more corporate look:

Just as the formula for the mix has changed several times over the years, so has the Aunt Jemima image been modified several times. In 1968, she was slimmed down from her previous appearance, depicting a more “svelte” look and wearing a white collar and geometric print “headband” still resembling her previous kerchief.

In 1989, as she marked her 100th anniversary, her image was again updated, with all head-covering removed, revealing wavy, gray-streaked hair and gold-trimmed pearl earrings and replacing her plain white collar with lace. At the time, the revised image was described as a move towards a more “sophisticated” depiction, with Quaker marketing the change as giving her “a more contemporary look” and which remain[ed] on the products as of 2020.

But We Need to Talk About That Picture of ‘Nancy Green’

In the course of researching Green’s history, we attempted to find more information about the photograph appended to many of the posts — which seemed to appear from the ether in 2020. All Google Image results were from June 2020: 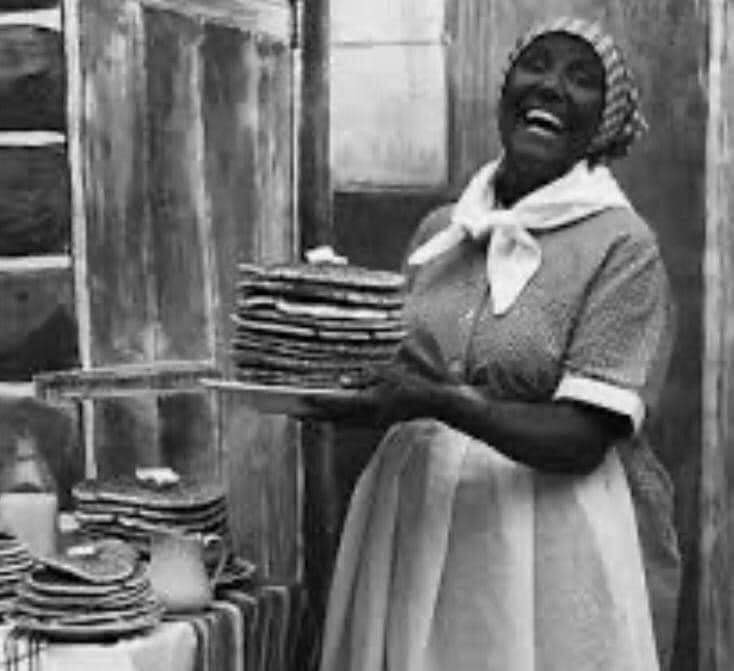 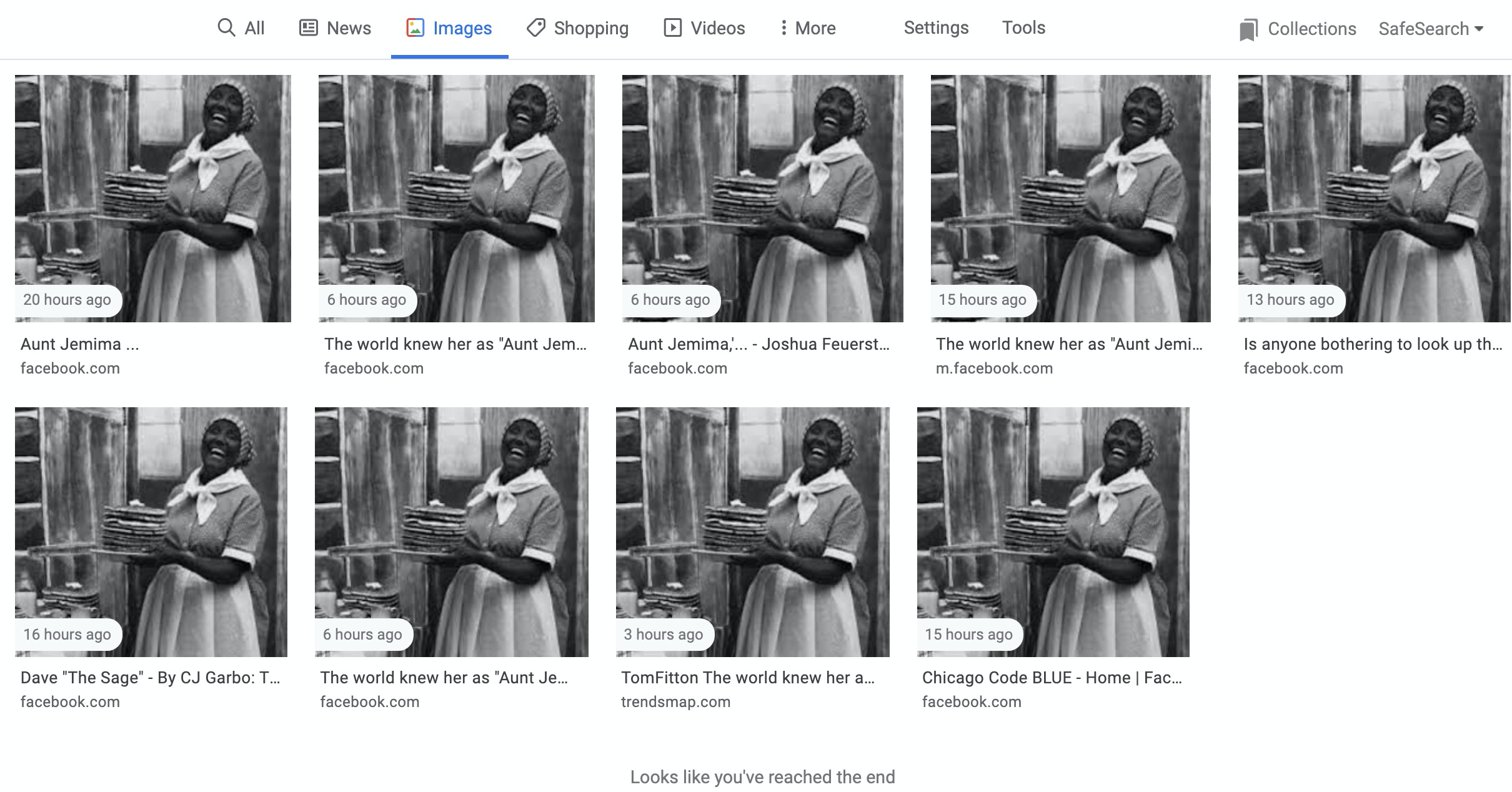 Curiously, a reverse image search returned very few results, and a first appearance of the photograph in or around the year 2013: 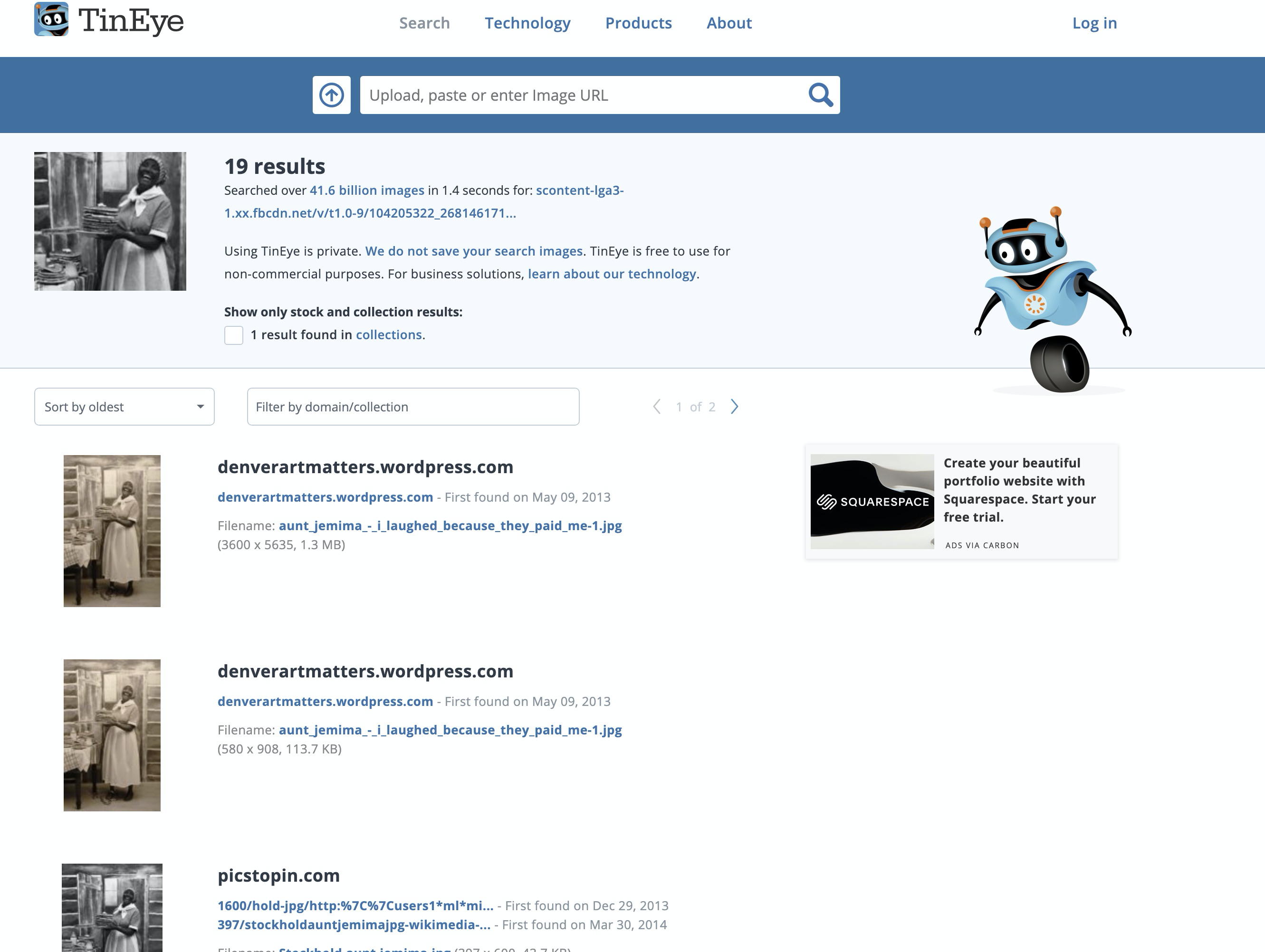 We found the first iteration on an art blog, crawled on May 9 2013. We located the post to which it was attached, “Sally Stockhold’s 3-Camera Circus,” which identified the image as the creative work of Stockhold. A 2011 article in the Denver Post described some of her creative work:

Her central focus has been a group of self-portraits in which she photographs herself as famous and infamous artistic, historical and literary figures, ranging from Ayn Rand and Leni Riefenstahl to Alice Neel and Diane Arbus.

For each of these complex, partially hand-colored compositions, she assembles elaborate sets that often incorporate impeccably crafted backdrops and props that would be worth showing on their own.

Some curators and other art insiders have been leery of these images because they are contrived, stagey and a little bizarre, but it is exactly those qualities — all intended by the artist — that make them so intriguing.

In the original version, Stockhold’s work has a sepia tone, and the “Aunt Jemima” character she dressed as was chained to the stove: 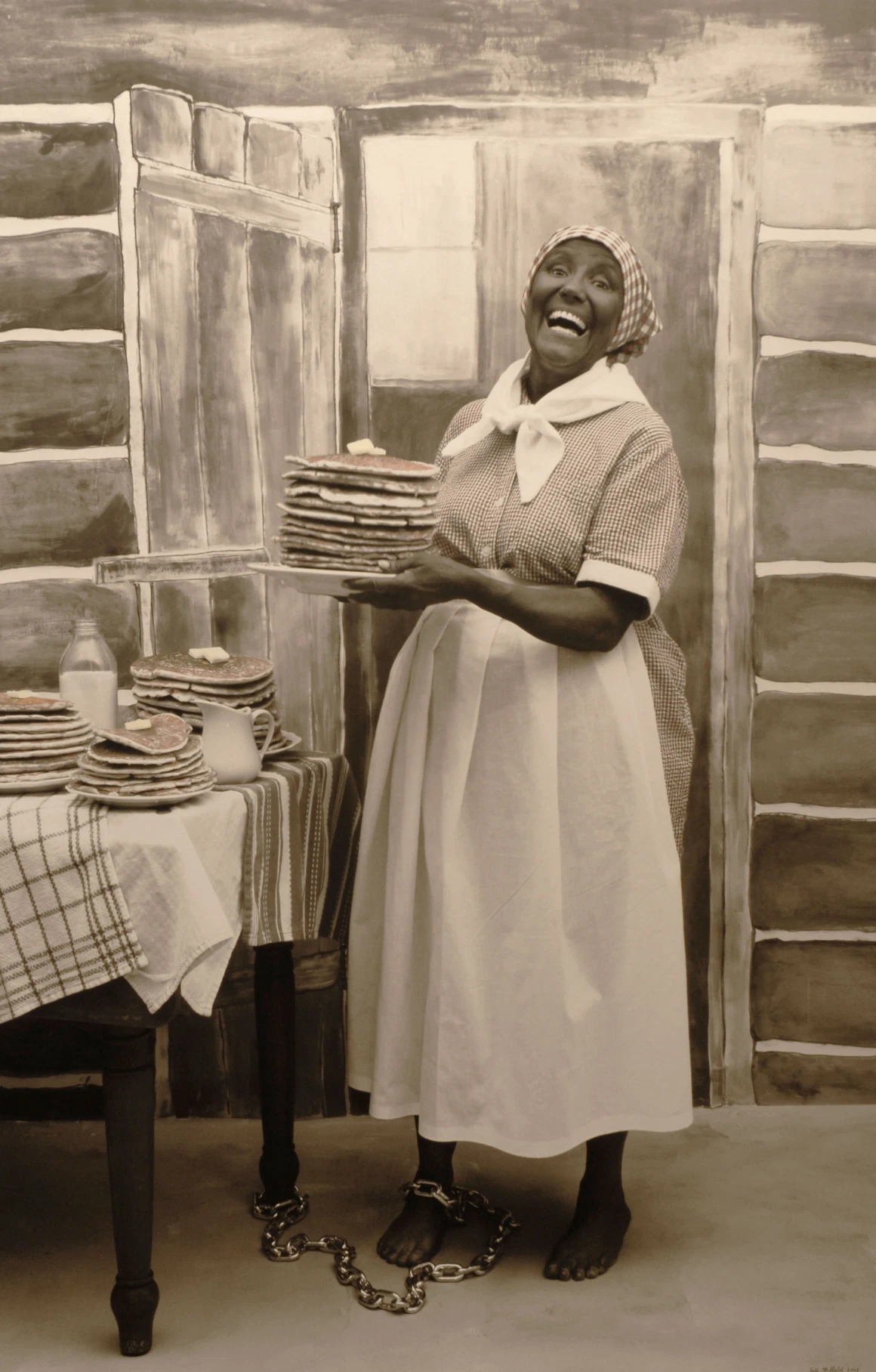 Stockhold was also credited as the creator of the image on a Wikimedia Commons page, as well as a July 2008 Flickr page titled “Aunt Jemima, ‘I laughed because they paid me.'”

For all the lamenting of Pepsico’s purported erasure of Nancy Green, those sharing the post couldn’t even be bothered to notice they shared a modern photograph of a white woman — in a photographic commentary about racism in branding — in Green’s stead.

It is true that Nancy Green breathed life into the character of Aunt Jemima, arguably becoming the driving force behind the brand’s breakout appearance at the 1893 World’s Fair. An argument could be made that retiring Aunt Jemima “erased” Green’s legacy, but a new Aunt Jemima was hired in 1933, and again in 1955 for live appearances in Disneyland. Green’s legacy is covered in books and research materials, and simply retiring the brand name is unlikely to erase her from history. Nevertheless, the circulating posts made it sound as if the modern Aunt Jemima on 2020 packaging was a depiction of Green, when in actuality the character and brand had undergone numerous revisions in its more than a century-long existence. Finally, the widely-shared image accompanying the post was of a modern photographer’s satirization of a smiling, chained Aunt Jemima.