Image depicts a swan hugging the veterinarian who saved its life.

On January 12 2019, a Facebook user added the caption “The Swan embracing the veterinarian, who saved his life” to the photo below: 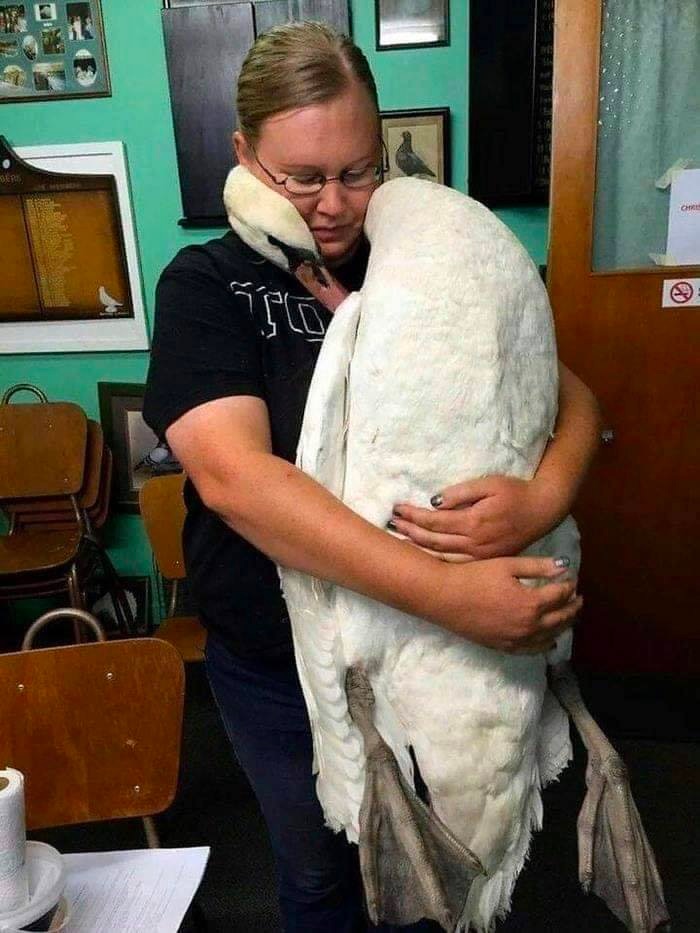 Part of the image’s appeal seemed to be a long-circulating myth that swans are inherently dangerous and fond of breaking human bones. The BBC addressed the risk of handling swans in an April 2012 article:

In April 2010, a swan on the River Cam in England made the news after repeatedly attacking rowers. It was nicknamed Mr Asbo, named after the Anti-Social Behaviour Orders issued by UK courts at the time. Two years later, there are still calls for it to be removed from the river, as the seasonal attacks go on.

But such incidents are very rare, says John Huston of the Abbotsbury Swannery in Dorset, where there are 1,000 swans but no recorded attacks on humans in the colony’s 600-year history.

“If you approach a swan nest on the river, they might get aggressive and hiss and flap their wings, but the danger is over-rated and it’s a myth that they will break your leg or arm with their wings.

“They are not that strong and it’s mostly show and bluster.”

Perrins says he has spent many years handling swans and never been injured, just received the odd bruise.

A reverse image search suggested that the “swan hugging veterinarian” picture was relatively new to the internet, with the first iteration of this particular description we could find shared on January 1, 2019. Although its initial backstory was different (and less popular), it was posted to Reddit‘s r/aww with the title, “Swan gives owner a loving hug.”

However, its submitter u/aScuffedVillain also submitted the same photograph on the same day to r/peoplefuckingdying with a different backstory and title: “sWaN sTrAnGlEs OwNeR tO dEaTh.”

We don’t know much about the swan hug image’s origin, but it was originally shared with two different backstories (one of which appeared to be humorous). The setting of the photograph appears to be a classroom rather than a veterinarian’s office, and the likeliest explanation is that opportunistic social media users employed the successful strategy of attaching an interesting short backstory to the photograph to encourage others to share it. A similar story went viral in 2016, possibly inspiring the 2019 Facebook post.