After Netflix’s Tidying Up with Marie Kondo debuted in January 2019, social media lit up with takes lambasting Kondo’s supposedly draconian position on the possession of books:

Wait Marie Kondo is telling people to toss their books? THEIR BOOKS?

was very intrigued by marie kondo’s konmari method until she got to the category of throwing out books………….

My books are basically the only thing I own that bring me joy. I’d be on that show fully nude surrounded by books.

So what did Marie Kondo say about books? According to the social media outrage machine, Kondo insisted that in order to be tidy, people should ideally own no more than thirty books:

Marie Kondo: Ideally, you shouldn’t have more than 30 books.

“I have always imagined that Paradise will be a kind of library.”
– Jorge Luis Borges

The particular, peculiar figure of thirty books was attached to Kondo and her KonMari method of “tidying up” across social media. One January 3, 2019 tweet spread particularly far:

Do NOT listen to Marie Kondo or Konmari in relation to books. Fill your apartment & world with them. I don’t give a shite if you throw out your knickers and Tupperware but the woman is very misguided about BOOKS. Every human needs a v extensive library not clean, boring shelves

The Guardian kicked in with a think piece (“What we gain from keeping books – and why it doesn’t need to be ‘joy'”), and the Telegraph offered its own take (“The Marie Kondo backlash: what’s wrong with owning more than 30 books?”) A writer for Oprah’s O declared she was opting out of the thirty-book requirement, thank you very much. A problem with her position was evident in its subheading (and her first paragraph reiterated the omnipresent “thirty books” claim:

Netflix’s Marie Kondo Suggested People Throw Away Their Books—but I Refuse
This bibliophile will not be watching Tidying Up.

I started thinking about my small New York City apartment after the internet buzzed about Marie Kondo’s new Netflix show, Tidying Up, which is facing backlash since the organizing expert recommends people limit their book collections to no more than 30. I feel warm when I walk into my home every day, greeted by tall windows (a rarity in this city), yellow and gray decor, and my stuffed Harry Potter owl, Hedwig.

The backlash raged on for about two weeks before people started critically looking at Marie Kondo’s “thirty books” edict. As it turns out, it all started with an affectionate joke:

To be clear, Marie Kondo never says she hates books. But the narrative has stuck around, in part because of a popular Twitter meme that shows Kondo sitting on a couch and a speech bubble coming out of her mouth that says, “Ideally, keep less than 30 books.” It was originally created by Rev. Jeremy Smith as a joke about the clergy’s book-hoarding ways (he says he uses the KonMari method and that his post “wasn’t intended as a slam on Kondo at all”), but it took off when the writer Jennifer Wright shared a version with the clerical references removed. “This woman is a monster,” she captioned it. (Wright has since deleted the post and apologized for it.)

The 30-book figure does have some basis in Kondo’s words, but it’s not prescriptive advice. Here’s what she writes in The Life-Changing Magic of Tidying Up: “I now keep my collection of books to about thirty volumes at any one time.” But that does not mean she thinks you should have only 30 books. That number is just what works for her.

Vox linked to the original meme, which very specifically contained a joke from and by clerics for their book-amassing ways: 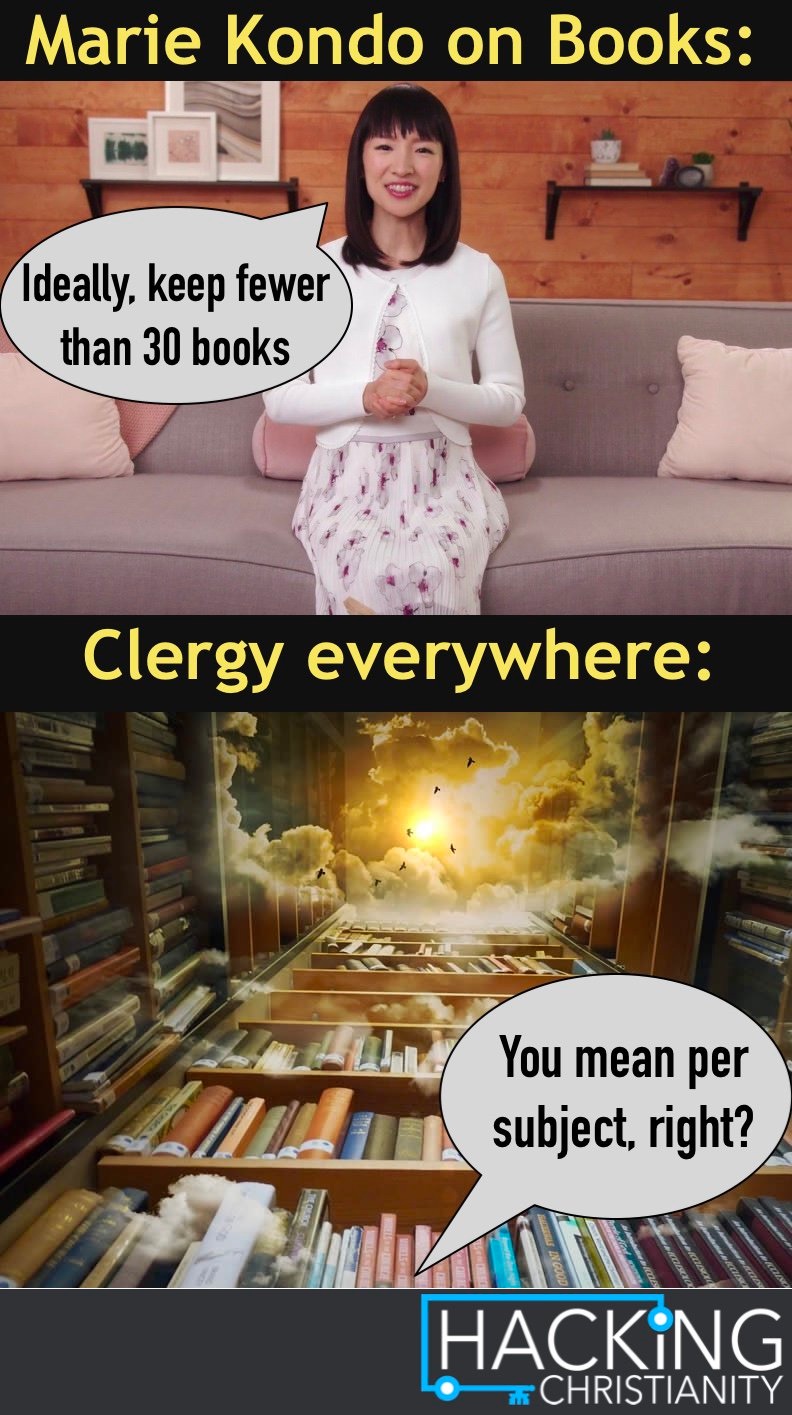 On January 14, 2019, the altered meme’s purported originator, Jennifer Wright, responded to Twitter criticism (in italics), deleting the original tweet with the partial image:

I feel like what happened here is you wanted to make a joke in order to express your love of books. But in the process, the meme you used misrepresented a WOC’s advice + you used a loaded word to describe her. We all mess up, it would be big to acknowledge yours.

Yep, that sums it up.

I definitely didn’t think well enough about my word choice regarding Marie Kondo, and had an over hasty reaction to seeing a meme about her encouraging people to get rid of their books. I’m sorry about that, and I’ll try to do better.

An editorial in Bustle examined the reasons people seized upon directives Kondo never issued, also highlighting the unpleasantness of attacking Kondo’s (who communicates via a translator on her show) ability to communicate her concepts:

Ellen Oh cites an article in The Guardian by Anakana Schofield, written after Schofield’s viral KonMari tweet, as one example of “a willful misunderstanding of Kondo’s statements here to suit her own narrative.” Oh says, “There is an overemphasis on the words ‘spark joy’ without understanding what [Kondo] really means by it. Tokimeki doesn’t actually mean joy. It means throb, excitement, palpitation. Just this basic understanding annihilates Schofield’s argument that books should not only spark joy but challenge and perturb us. Tokimeki would imply that if a book that challenges and perturbs us also gives us a positive reaction, then why wouldn’t you keep it?”

Oh also mentions Wright’s now-deleted tweet in which she called Kondo “a monster,” saying, “The deliberate misunderstanding starts with forgetting that the advice is geared to people looking to declutter their life in the first place. If that doesn’t apply to you, then don’t listen.”

“The backlash has focused on everything from [Kondo’s] poor English to making fun of the terms she [uses],” Oh says. “We have seen so many memes making fun of the concept of ‘sparking joy’ and it reminds me in many ways of people deliberately misunderstanding and making fun of my parents’ broken English.”

Kondo never said that those using her KonMari method of organization ought to keep only thirty books at any given time. Kondo’s described barometer of “Tokimeki” was often described by her as “sparking joy,” but the term’s underlying meaning was more complex. Kondo did say that she, personally, kept thirty books at any given moment, but she did not apply that directive to any other person.

It is very difficult not to point out that the supposed book lovers railing on the “thirty books” rumor had not themselves actually read Kondo’s book to determine whether the rumor was true, and the outrage was another object lesson about becoming angry over paraphrased or rumored quotes, rather than listening to or reading primary sources.