A photograph shows Covington Catholic students in blackface at a 2015 (or 2013) school event.

During an uproar following a viral video of Covington Catholic students surrounding a Native American man at the National Mall on January 19 2019, allegations surfaced that students from that institution had been photographed in blackface.

On January 21 2019, the Facebook page “The Other 98%” shared a status update and image purportedly demonstrating sanctioned blackface at a 2015 Covington Catholic event: 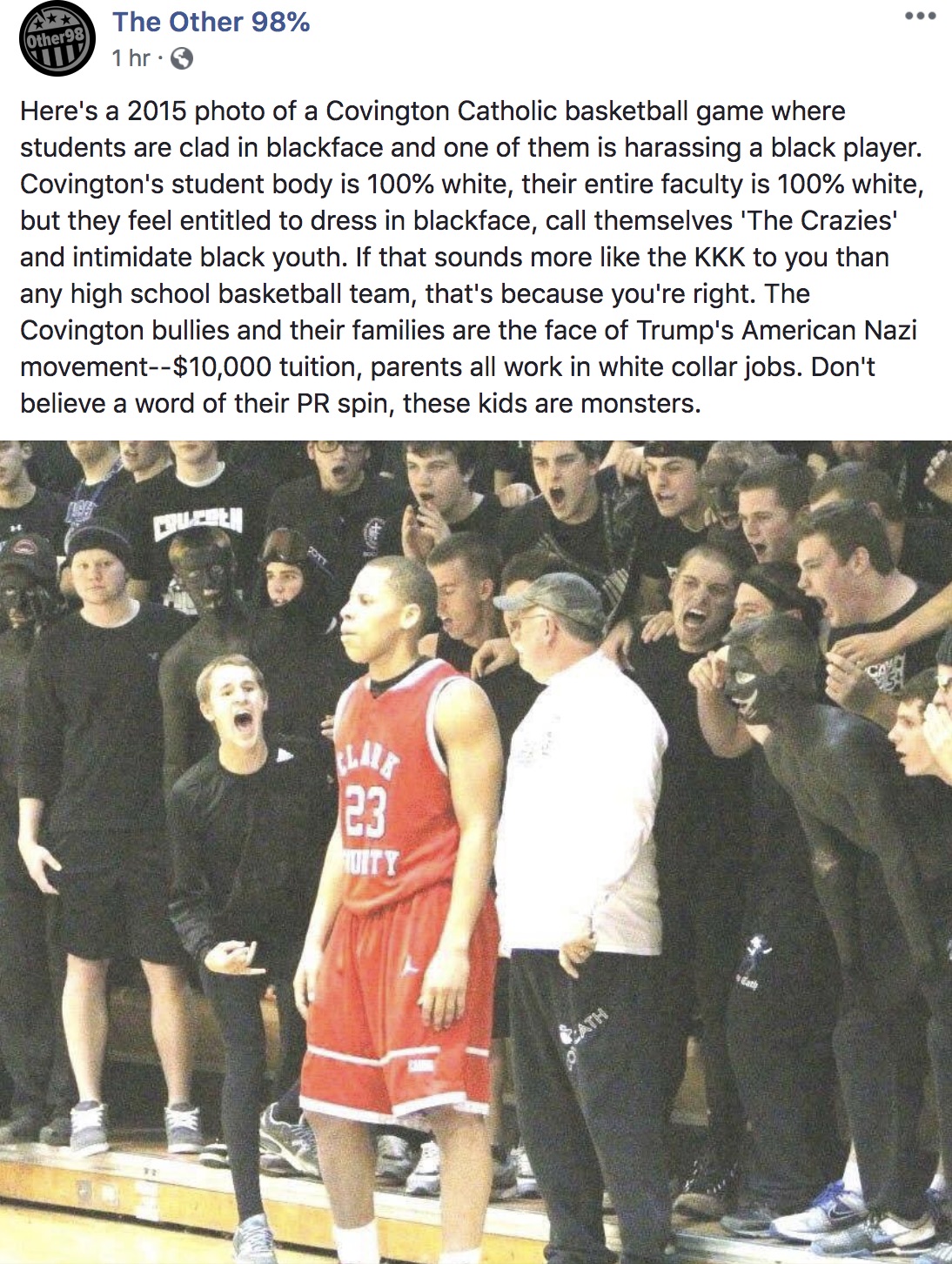 Text shared alongside the image by “The Other 98%” said:

Here’s a 2015 photo of a Covington Catholic basketball game where students are clad in blackface and one of them is harassing a black player. Covington’s student body is 100% white, their entire faculty is 100% white, but they feel entitled to dress in blackface, call themselves ‘The Crazies’ and intimidate black youth. If that sounds more like the KKK to you than any high school basketball team, that’s because you’re right. The Covington bullies and their families are the face of Trump’s American Nazi movement–$10,000 tuition, parents all work in white collar jobs. Don’t believe a word of their PR spin, these kids are monsters.

The photograph also appeared elsewhere on social media, prompting intense interest in its origin. A source provided for the images was a December 2015 forum post on BluegrassPreps.com about Covington Catholic, “Should The Colonel Crazies’ Treatment Of Inbounders Have To Change?”

On page four of the discussion, someone embedded the above-displayed photograph with the following comment claiming the image was possibly from 2013:

The kids used to stay in the stands pretty much (circa 2013), seems like they have migrated on to the floor.

Underneath, a subsequent commenter replied: “Blackface?” Another responded:

Must have been a black out. It’s not just their faces; looks like they are completely black. I got no problem with this.

On Twitter, a user offered additional speculative information about the image, suggesting it was actually from 2011:

This photo is not from 2015. It is probably from the November 29, 2011 game at Covington. The black GRC (Clark County) player is Charlie Rogers & he was a senior at the time. GRC beat Covington in a tournament the year before by 27 then setup a H/A series.

We also located video shared by the Covington Catholic High School YouTube page in January 2018. In the compilation clip, students can be seen wearing black paint on their faces. (We were unable to archive the footage in the event the page is deleted.)

That particular Covington Catholic photograph going around social media remains of indeterminate origin, but video shows that spectators do use black paint on their faces at Covington Catholic events. The image was shared in December 2015 in its current format, and it was not doctored after the January 2019 controversy involving a student and Nathan Phillips. However, because we were unable to track down this exact image, we rate this story Unknown.