U.S. President Donald Trump tweeted in defense of Covington Catholic students, and said "Indians" should "go back to India."

On January 19 2019, Covington Catholic student Nick Sandmann was named in a viral video after a clip of his interaction with Native American activist Nathan Phillips at the National Mall spread across social media.

In the ensuing controversy, a tweet attributed to U.S. President Donald Trump spread in screenshots on social media: 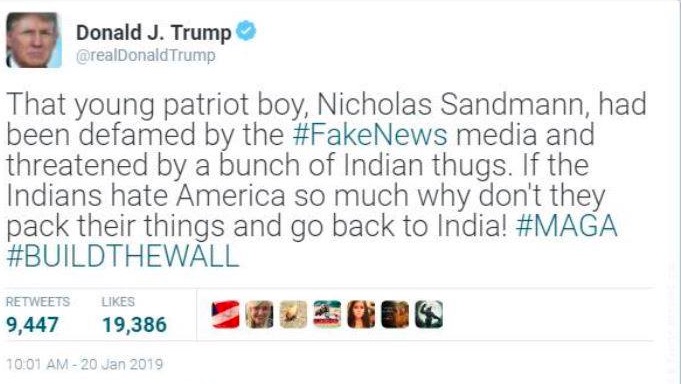 That young patriot boy, Nicholas Sandmann, had been defamed by the #FakeNews media and threatened by a bunch of Indian thugs. If the Indians hate America so much why don’t they pack their things and go back to India! #MAGA #BUILDTHEWALL

This tweet is a clear fabrication. According to ProPublica’s Politwoops tool, President Trump’s most tweet deletion at that point took place on January 14, five days before the video appeared.