An image shows an Amazon listing for a Donald Trump-themed face mask with a logo that resembles a Nazi swastika.

In July 2019, we addressed a similar rumor about Ivanka Trump purportedly wearing a version of the logo seen on the face mask in the tweet:

In that fact-check, we linked to a February 2017 article about the symbol seen in the altered image of Ivanka Trump. That piece was about a reaction to earlier material containing an image of the symbol on a protest sign; the outlet clarified that in that context, it was presented as political commentary and an anti-Trump symbol:

We haven’t been able to speak with either of the men in the photo, but commenters have since pointed out that the sign the man held was actually an anti-Donald Trump protest symbol. From a distance it looks to be a Swastika, but up close the sign consists of four large “T” letters and smaller letters “RUMP” filling out the extra space.

Although links in the tweet’s thread led to an error page, the screenshot still showed that if the mask was authentic, it was not sold by Amazon.com per se. The image showed the name of the seller — Nine Day Shop, not Amazon. Amazon’s Marketplace features third-party sellers, whose products are neither curated nor handled by Amazon.com:

Third-party sellers are independent sellers who offer a variety of new, used, refurbished, and collectible merchandise.

The steps to place an order with a third-party seller are the same as placing any other order on Amazon.com. You add items to your cart, then complete your order through the Amazon checkout process. Payment for your order may be processed immediately, instead of when the order ships. Amazon will disburse your funds to the third-party seller but never pass along your payment information.

If items from the third-party seller aren’t fulfilled by Amazon, your order is fulfilled directly by the seller who will also handle their customer service, excluding Amazon Prime items. If you encounter a problem with these orders, you may be eligible under the Amazon A-to-z Guarantee. For more information, go to About A-to-z Guarantee.

As mentioned above, links in the Twitter thread led to an error page, making it initially difficult to verify the existence of the Trump mask and swastika-like symbol. However, we were able to locate the original listing on the Wayback Machine — archived by a user on July 5 2020: 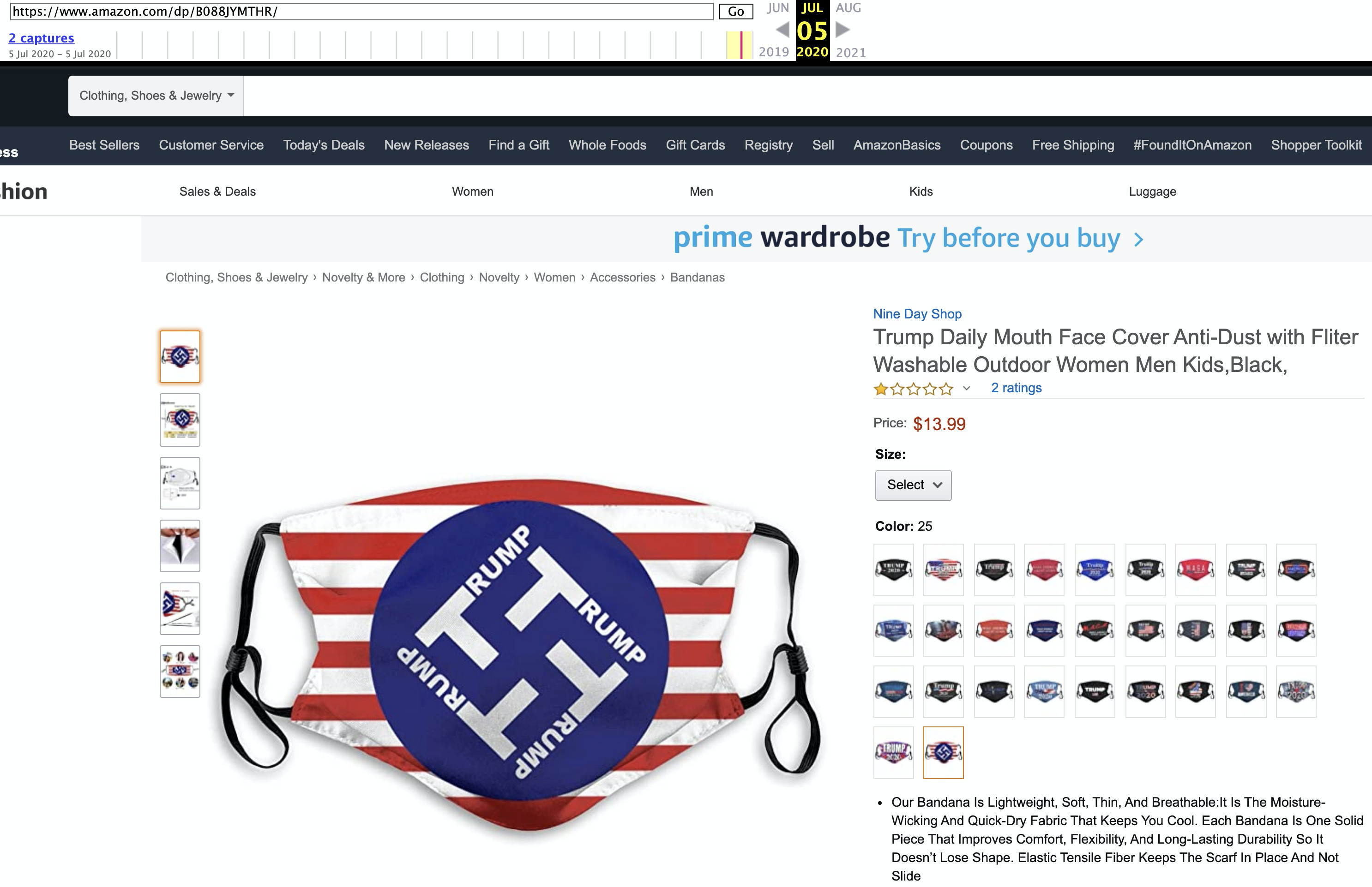 Although the Trump “swastika” mask listing was real, there was a significant amount of context to go with it. The symbol was originally spotted on an anti-Trump protest sign in 2017, and has circulated in misleading contexts since. Amazon.com, tagged in the tweet, was not the entity retailing the mask (though it appeared on their platform). A third-party seller, Nine Day Shop, once offered the mask for sale. Although it was available for purchase via Amazon.com’s Marketplace on July 5 2020, it had been withdrawn by July 6 2020.