A photograph shows a crowded beach in Raleigh, North Carolina -- flouting physical distancing recommendations amid the COVID-19 pandemic -- in mid-2020.

In early July 2020 ,the following screenshot circulated on Facebook, showing a post from an accout by the name of “Kal El” who said that “Covid is never going away” alongside a purported picture of a beach in Raleigh, North Carolina: 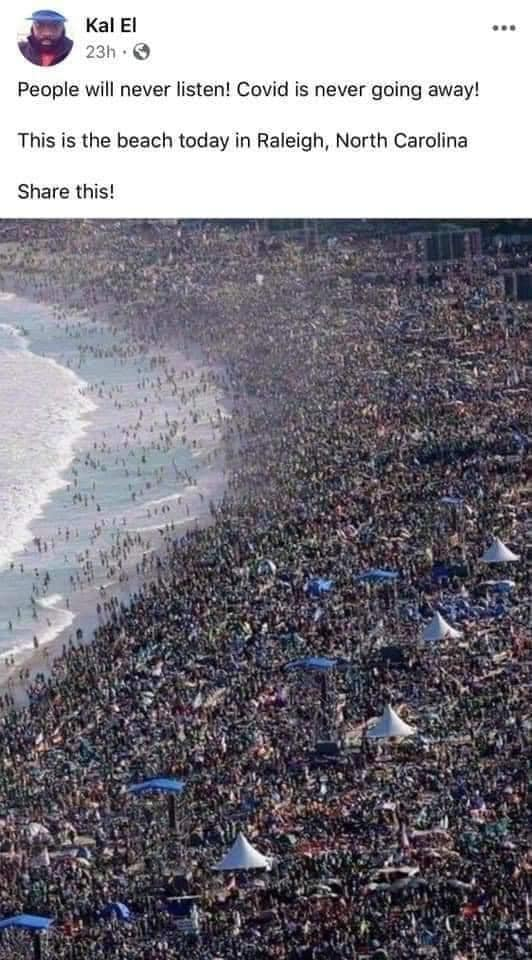 An image showed a heavily crowded beach and the following text:

People will never listen! Covid is never going away!

This is the beach today in Raleigh, North Carolina

Although the original post was either deleted or made private, it existed as shares published to Facebook in early July 2020:

First of all, we’re skeptical that this shows a Raleigh beach, because: 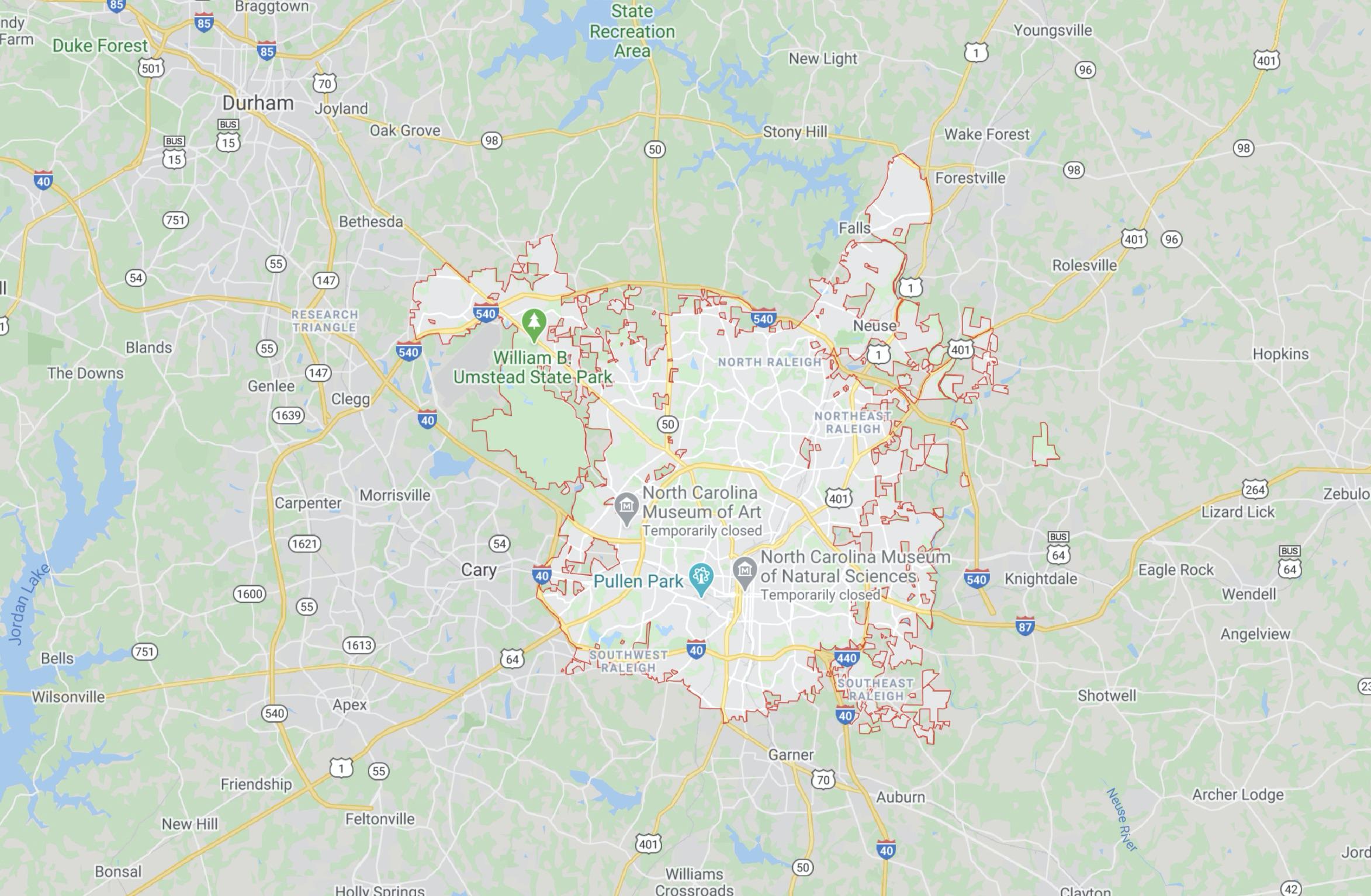 There were a few bodies of water visible, but it wasn’t immediately clear if any of those had “beaches” attached. However, a November 2017 USA Today article headlined “Beaches Closest to Raleigh, NC” began as follows:

Visitors and residents of Raleigh appreciate its central location; the city is about three hours from the mountains and about two hours from its nearest beaches. Raleigh’s closest shores offer tranquil waters, charming restaurants and attractions, and a laid-back, relaxing atmosphere that makes them ideal for a seaside getaway. Visitors are spoiled for choice at each beach; lodging ranges from quaint family-owned motels to full-service hotels to vacation cottages and condos.

The first beach on the list was 131 miles from Raleigh.

But that wasn’t all we found. A reverse image search quickly showed us that the claim the photograph was a) from during the COVID-19 pandemic or b) from a Raleigh beach was false. It wasn’t clear where the image was taken, but it was published to the internet no later than 2013 — making it at least seven years old by July 2020: 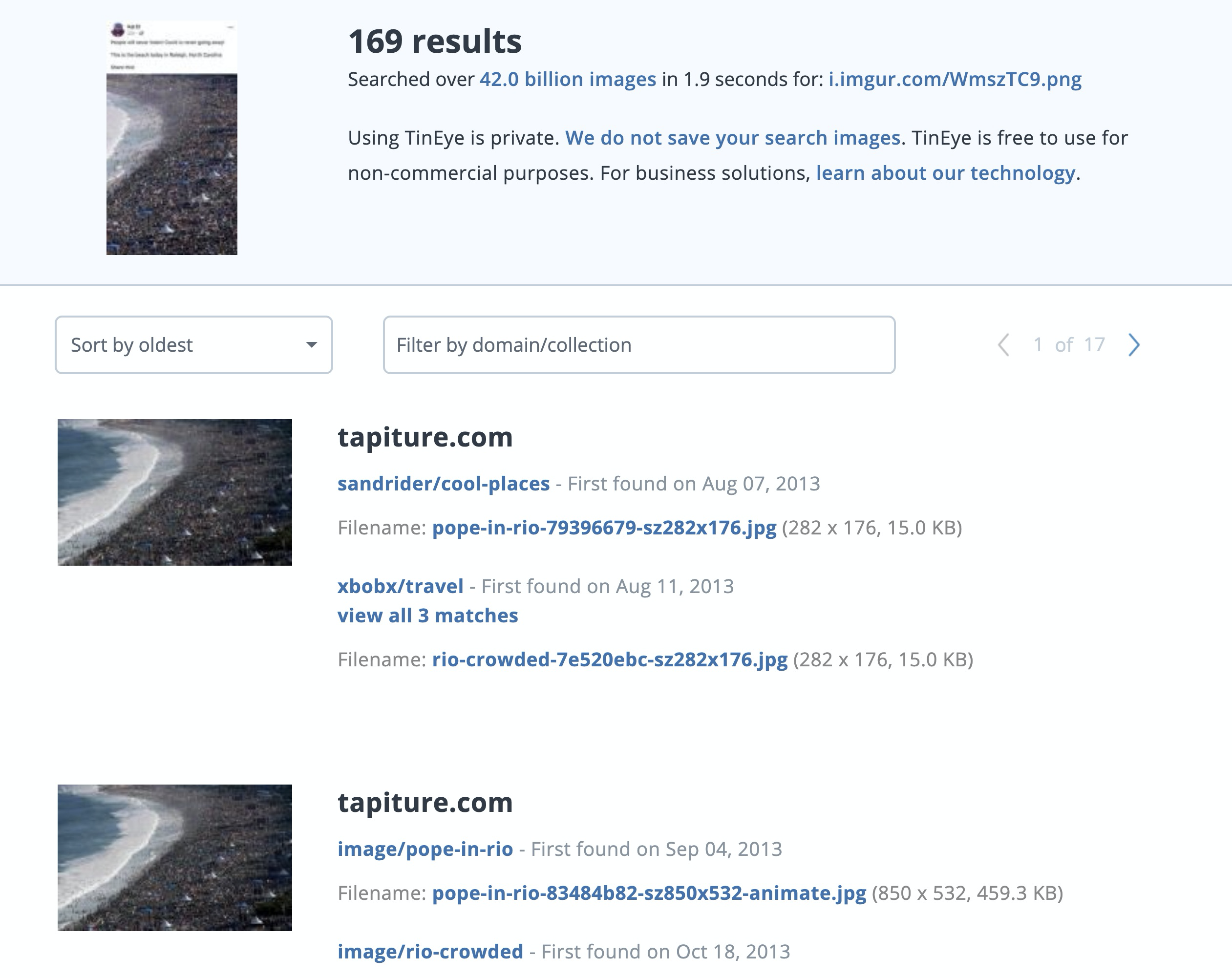 Further, the first labels (if accurate) claimed that image was taken in Rio de Janeiro, Brazil.

A since-made-unavailable post by Kal El on Facebook claimed “Covid is never going away” and purportedly showed crowded beaches in Raleigh, North Carolina in June or July 2020. The photograph that appeared with the claim was from 2013 or earlier, and Raleigh, North Carolina is more than a hundred miles from any beaches. Although the claim that partygoers in the summer of 2020 were behaving carelessly was certainly not without merit, the description of this particular image is false.

The image in question was the subject of a July 2018 AFP fact-check. In that instance, the “beach in Raleigh, North Carolina” was then-identified as a purported beach in China. AFP noted that the image was “actually a picture taken in Rio de Janeiro in 2013 of a crowd that attended a mass of the pope.”