Black Lives Matter members attacked a man during a protest calling for the removal of a statue of King Louis IX in St. Louis in June 2020.

A demonstration calling for the removal of a historical monument in in St. Louis in June 2020 was targeted by both far-right online users and channels both before it took place and prior to an altercation that was subsequently used to smear both the organizers and Black Lives Matter.

The June 27 2020 protest was organized by local activist Umar Lee and a local entrepreneur, Ben Poremba to counter a “prayer rally” organized by the disreputable right-wing Gateway Pundit blog at Art Hill, the site of the statue honoring the French King Louis IX, for whom the Midwestern city was named.

“I said, ‘We’re gonna have it earlier than them to pre-empt them,'” Lee told us. “We don’t want the white nationalists to take Art Hill.”

Lee estimated the attendance for the event at between 150 and 200 people; other reports on the two demonstrations had similar estimates, with attendance split between Lee’s group and the blog’s rally.

“This is hate against the Catholic church,” said Mark Williams, who was photographed by Robert Cohen of the St. Louis Post-Dispatch arguing about the statue with a man identifying himself as Horus. “If 99 percent of people are Catholic, our racial problems go away.”

But another one of Cohen’s photos, showing a Black man later identified as Terrence Page punching a white man named Paul Metzger, was shared widely among right-wing social media users; one Facebook post seizing on the apparent fight to call Black Lives Matter “a terrorist organization” has been shared more than 29,000 times since being published on June 29 2020: 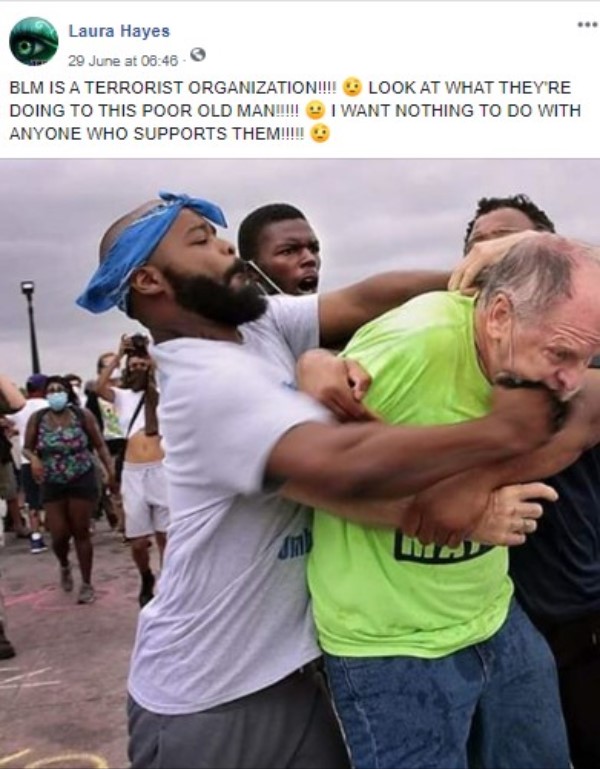 According to the Post-Dispatch, the fight started when Metzger was doused with pink liquid by another unidentified person. Both he and Page left the area under their own power.

Page was also seen in a video posted by the newspaper swiping at another white man’s phone and chasing him around the demonstration site: 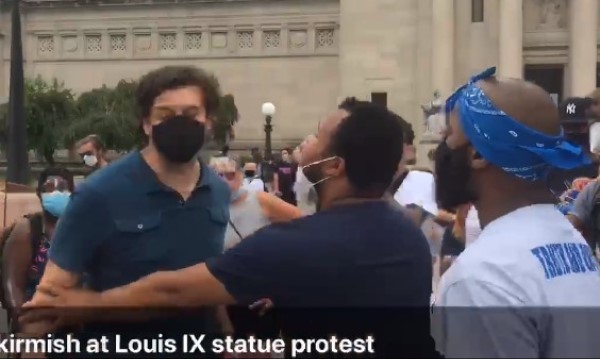 Local station KMOV-TV also reported that Page was also caught on video attacking a third man during the demonstration.

Both Lee and another local activist, Moji Sidiqi, told us that Page was not affiliated with any group demonstrating against the statue.

Lee added that he had already brought his event to a close with a prayer and left the site by the time the fight unfolded. Moji Sidiqui, an organizer for the Regional Muslim Action Network (RMAN), said that Page arrived after the event ended and refused to acknowledge her both times she approached him. Instead, Sidiqi said, he walked around the area yelling, “Do you want to be docile?” at others still in the area.

“I used the megaphone — and I said it very loudly — to say that this is not a place for violence,” she told us. “He did not address me. I definitely walked up to the [police] lieutenant who was there for security and I told him to keep an eye on this guy.”

In its report, KMOV did not identify Page as a member of RMAN or any group associated with Black Lives Matter. Page did not, however, express remorse for his actions; he said that supporters of the statue were “white supremacists.”

“You have actual terrorist groups thriving in this country, and nothing is being done about it,” he said.

But what went unreported by local outlets, Lee told us, was the presence of members of white nationalist groups like the Proud Boys and people wearing Nazi paraphernalia as part of the prayer rally. “Yeah, there were local Catholics there; there were a couple of priests there,” he said. “But there was also a lot of extremist personalities there.”

Both Lee and Sidiqi told us that the counter-protest and the campaign to tear the Louis IX statue down were not affiliated with Black Lives Matter.

“It’s an inaccurate statement to say that this was a Black Lives Matter-organized event,” he said. “This was an interfaith organized movement.”

However, both also expressed solidarity with Black Lives Matter as a whole. “RMAN hurts for the pain that our Black brothers and sisters have suffered through the centuries,” Sidiqi said. “We are eager to see positive change and positive laws.”

Metzger posted a photograph of himself after the incident. He wrote:

I went to the statue to defend the good name of Saint Louis IX and got my jaw jacked and glasses broken. The crowd is determined, and brainwashed. The statue is being defaced. People are being grabbed and abused, mob rule “the purest form of democracy”. Everyone in everyone face talking shit: shit from 5000 years ago literally, priest sexual abuse, crusades, everything covered in chalk, colored water being poured on people, anger flaring, skirmishes, volunteer medics, escorts to safety (angels), even about the “white” Jesus. People praying the rosary, a few clergy, holy men and women speaking the truth. But mostly the ignorant, fornicators, and violent taking control. Everything being filmed. Half were masked, half weren’t, Ill probably get the virus, I’m going to take a shower.

He was also photographed at the protest holding up a knife: 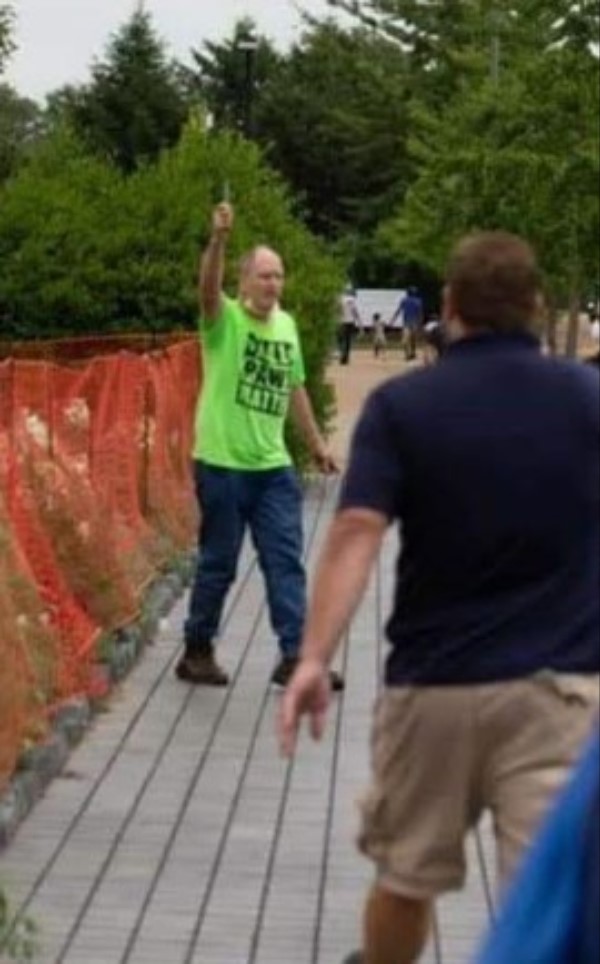 Here is the truth about the knife, yes I had a knife in my pocket at the rally, I did not brandish it until I was leaving after I was hit and flex my biceps as a show of strength and resolve against the Radical Muslim Group that organized the counter protest against the catholic prayerful. It has nothing to do with black people, I love black people. I applaud the guy for hitting me; because he was told that I was a KKK member by Regional Muslim Action Network and Tishaura Jones (our treasurer for St Louis).

He has since claimed in statements both on Facebook and to The Gateway Pundit that Black Lives Matter and “Antifa” were behind him getting punched.

However, the encounter at the protest was not the first interaction between Metzger and organizers of the counter-protest. Sidiqi provided us screengrabs of Metzger commenting on posts by both her and RMAN; in one post he writes, “Allah/God is watching you, and so am I, see my bright green shirt!” 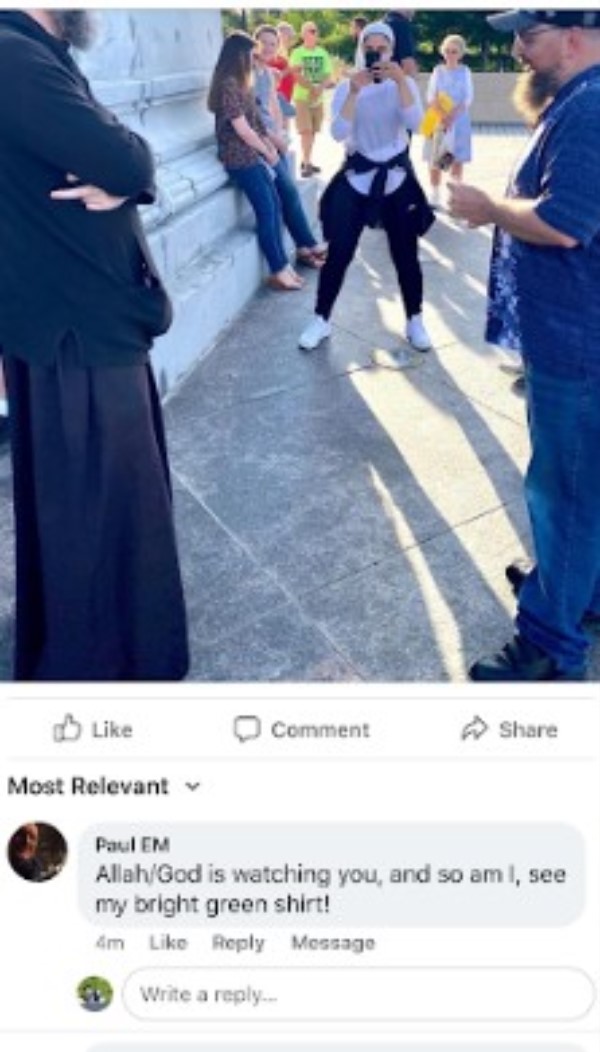 In another post, he calls Sidiqi “hot momma” while accusing her of blaming someone if they were to get hurt. He adds, “Watch what you put out there, it may just come back to bite you in your pretty little ass.”

“Thank you, I’m flattered,” Sidiqi replies. “I’ll certainly turn this over to the FBI. Good luck.” 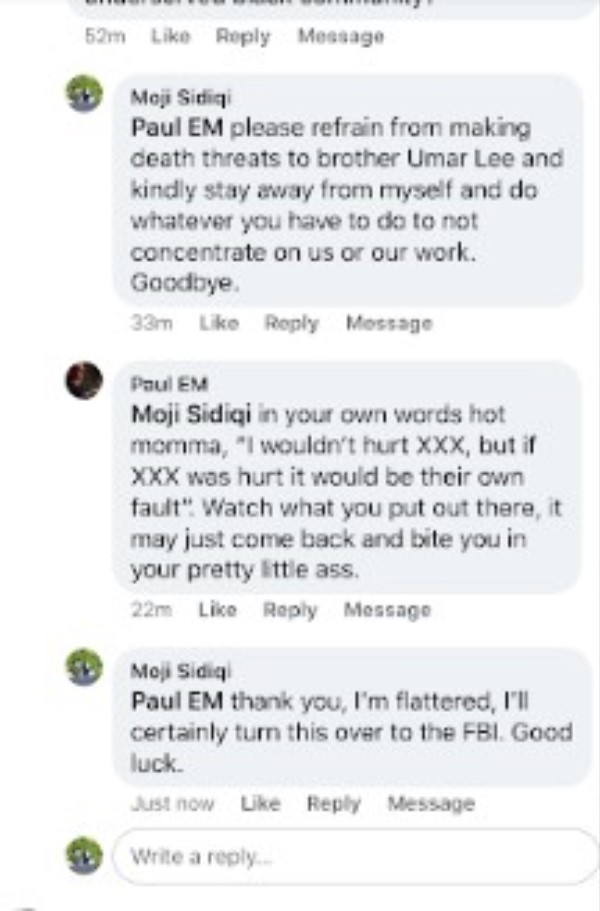 In a separate post provided to us by Sidiqi, Metzger wishes death on Lee.

“I see the jihadist Umar Lee from Regional Muslim Action Network break down the barricade, kill him,” he wrote. 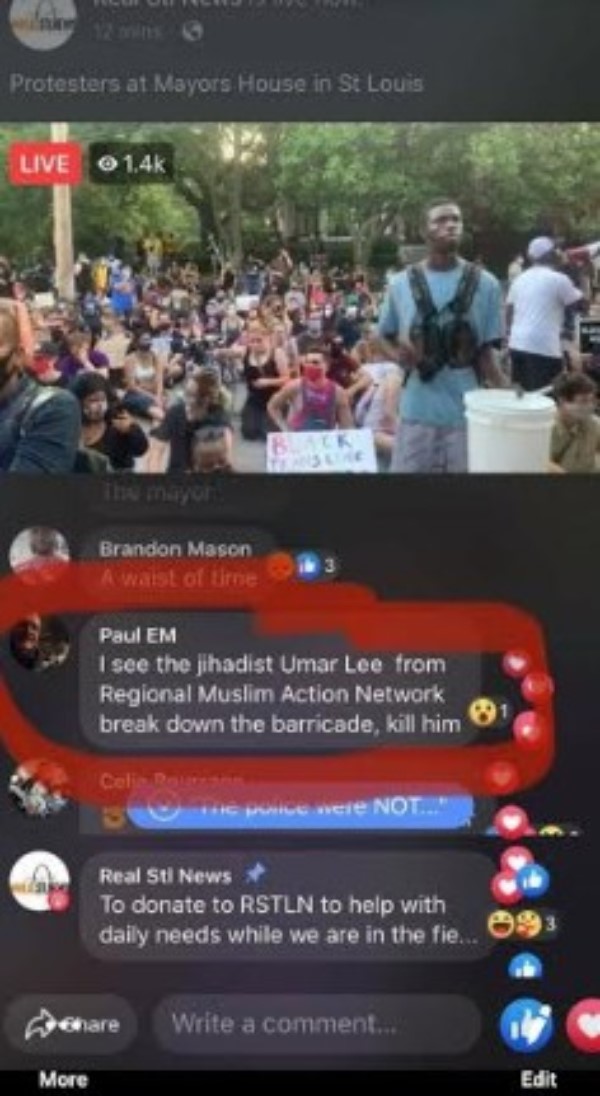 Lee, who first gained prominence as a protester and livestreamer in demonstrations against police brutality in nearby Ferguson in 2014, has become a favorite topic for far-right blogs, particularly over a statement he made to a fellow Muslim criticizing him in 2010:

My prefernce is to do this in yemen, somalia or pakistan where instead of fighting i could cut your neck with the sword of islam and watch you squeal like a bitch like daniel pearl. Instead i am staying legal not wanting to break the law and calling you out here in america where you can just get a good ole fashioned american ass whoopin.

Lee confirmed making the statement and told us:

This was a guy that had been challenging Muslims to fight. It was a Muslim guy, but he was challenging other Muslims to fight. And basically it wasn’t very well thought-out on my part. I thought he really wanted to fight, so I was trying to goad him into a fight. I was trying to talk a lot of shit to him to get him to agree to a fight because he had challenged other people in the Muslim community to wrestling matches. I’m a former wrestler myself, and I was down for combat and I wanted to kind of make him mad to where he wanted to accept the challenge, and I didn’t want to cross the line. It it’s not the most stupid thing I’ve ever said, and probably not the last.

However, he said, a photo often circulated alongside his remark showing him with a sword omits the fact that he was holding a stage sword used in theatrical productions.

Umar Lee, Moji Sidiqi, and Ben Poremba — the latter a native of Israel who owns several restaurants in the St. Louis area — created an online petition calling for St. Louis to rename itself, calling Louis IX “a rabid anti-semite” who “was also vehemently Islamophobic.”

However, other local activists have shared their call for the statue to be torn down. Rabbi Susan Talve, who leads the city’s Central Reform Congregation, has called its removal “a very important part of reclaiming history.” She also told the Jewish publication Forward:

We’ve been doing this work since Mike Brown was murdered. That was a catalyst for diving a bit deeper, and including more people in conversations about what the legacy of slavery, what the legacy of colonialism are in this country. We have a lot of reparations that we owe in this city. We have a lot of shameful history that we have to acknowledge and tell the truth about, if we’re going to learn from it, and grow beyond it.

As King of France, Louis IX led both the Seventh and Eighth Crusades against the Muslim nations of Egypt and Tunisia; he financed the latter by seizing the property of his country’s Jewish moneylenders. According to The Cambridge History of Judaism, he also led investigations into the alleged dangers of the Talmud, the Jewish religious text that forms the basis for their theology, leading to confiscation of Talmud manuscripts around the northern part of the country.

While not addressing the dueling protests or the criticisms of Louis IX’s historical record directly, the Archdiocese of St. Louis released a statement saying that residents should not seek to “erase history” while defending the city’s namesake:

On many evenings, he would not let them leave before he washed their feet. He personally paid to feed more than 100 poor Parisians every day. His care for the sick was equally moving; St. Louis frequently ministered to lepers. He also created a number of hospitals, including one for the blind and another for ex-prostitutes. For Catholics, St. Louis is an example of an imperfect man who strived to live a life modeled after the life of Jesus Christ. For St. Louisans, he is a model for how we should care for our fellow citizen, and a namesake with whom we should be proud to identify.

For his part, Lee said he and his allies would seek to meet with the Archdiocese.

“Monuments are not in history; they’re in the present,” he said. “What we’re concerned about is the present.”