"It's Day 47: Ukraine has now lasted longer than France did in World War II."

On April 13 2022, a Reddit screenshot suggesting that Ukraine “lasted longer than France did in World War II,” in terms of how long the European country has been resisting Russia’s invasion, made its way across platforms: 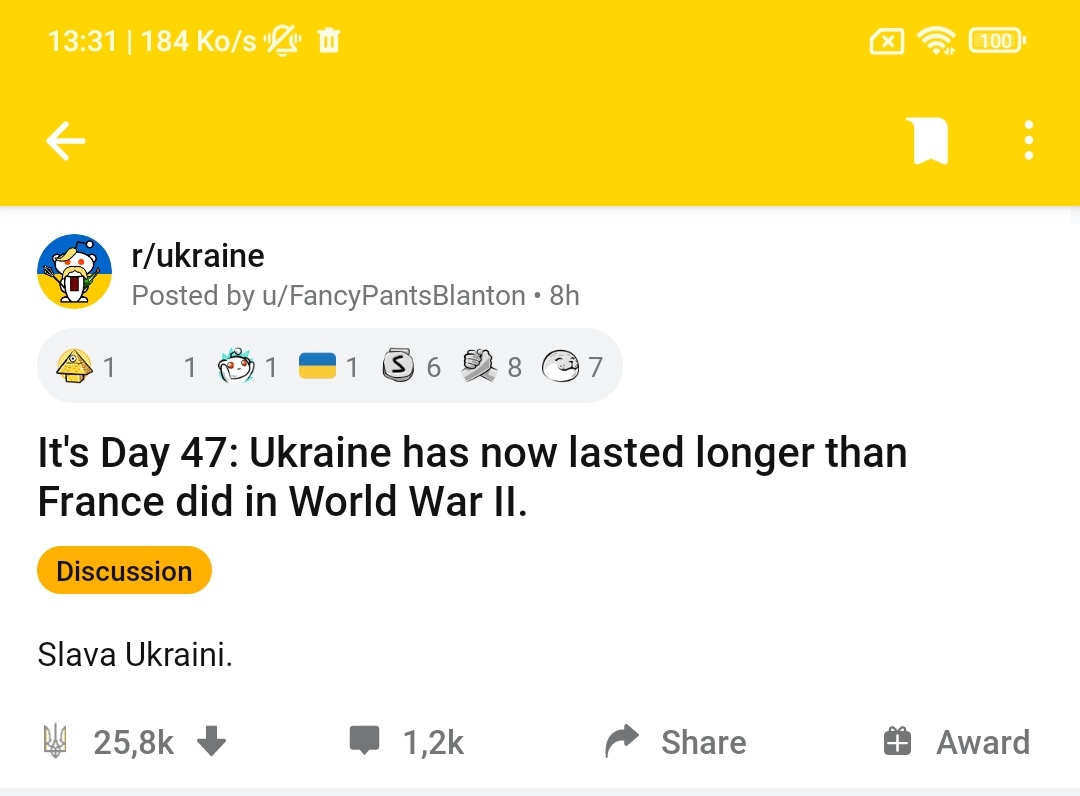 That post referenced “day 47” of the conflict between invading Russian forces and Ukrainians. However, the original post was shared to Reddit’s r/ukraine on April 11 2022:

It’s Day 47: Ukraine has now lasted longer than France did in World War II. from ukraine

How Long Did France ‘Last’ in World War II?

In the title of the post, the submitter stated that Ukraine “lasted longer than France did in World War II,” a reference to France’s eventual occupation by Germany in that conflict.

Brittanica.com’s entry on the “Battle of France” provided concise context along with specific dates for comparison. It began:

[The] Battle of France, (May 10–June 25, 1940), during World War II, the German invasion of the Low Countries and France. In just over six weeks, German armed forces overran Belgium and the Netherlands, drove the British Expeditionary Force from the Continent, captured Paris, and forced the surrender of the French government.

History.com was a bit less precise in their explanation:

Paris fell to Nazi Germany on June 14, 1940, one month after the German Wehrmacht stormed into France. Eight days later, France signed an armistice with the Germans, and a puppet French state was set up with its capital at Vichy. Elsewhere, however, General Charles de Gaulle and the Free French kept fighting, and the Resistance sprang up in occupied France to resist Nazi and Vichy rule.

Using a duration calculator and inputting May 10 and June 25 of the same year, we arrived at the calculation described in the Reddit post — 47 days between Nazi Germany’s invasion and France’s surrender to the regime: 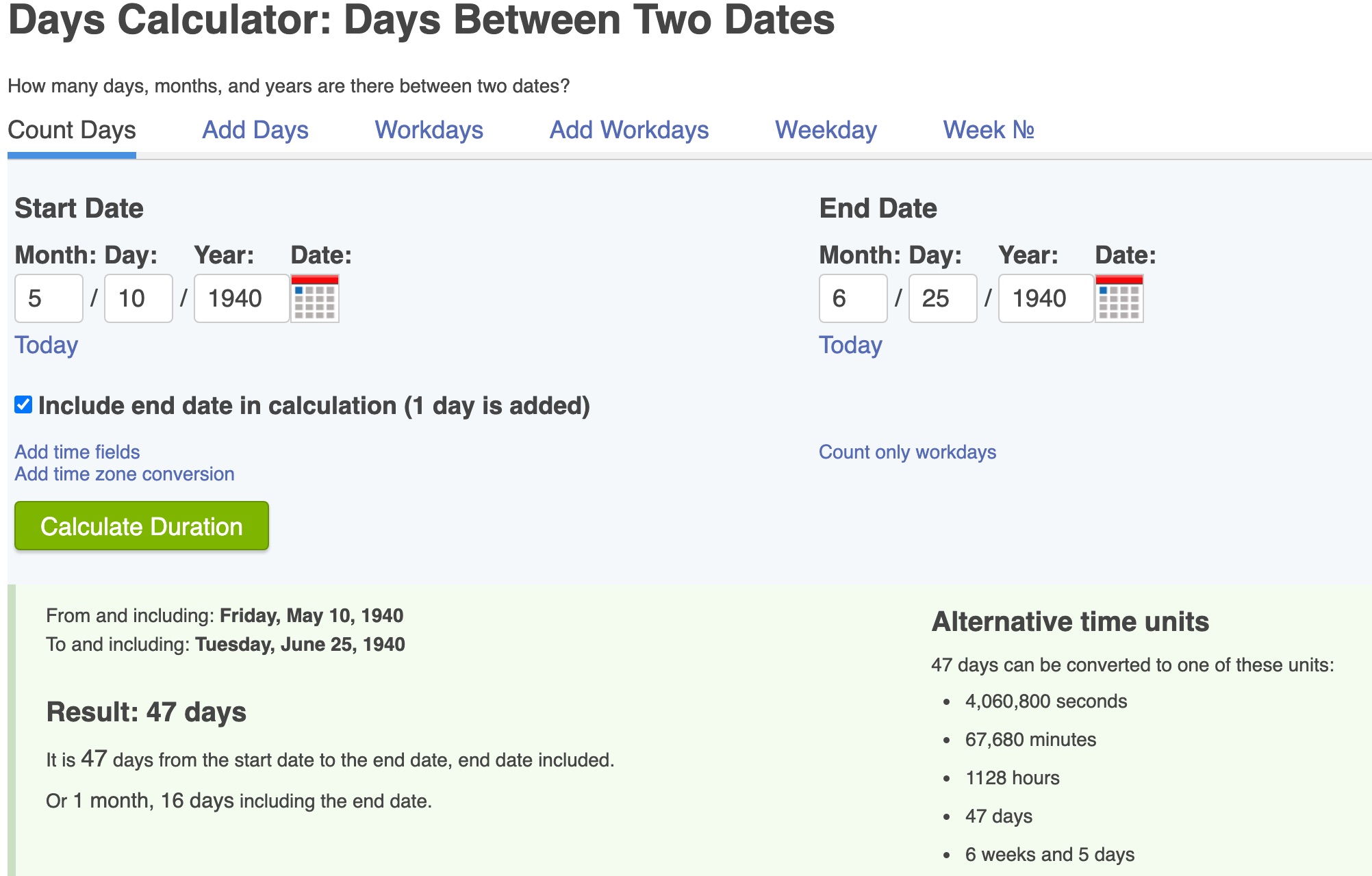 When Did Russia Invade Ukraine?

Has Ukraine ‘Lasted Longer’ Against Russia’s Invasion Than France Did in World War II?

One again, the calculator returned “47 days“: 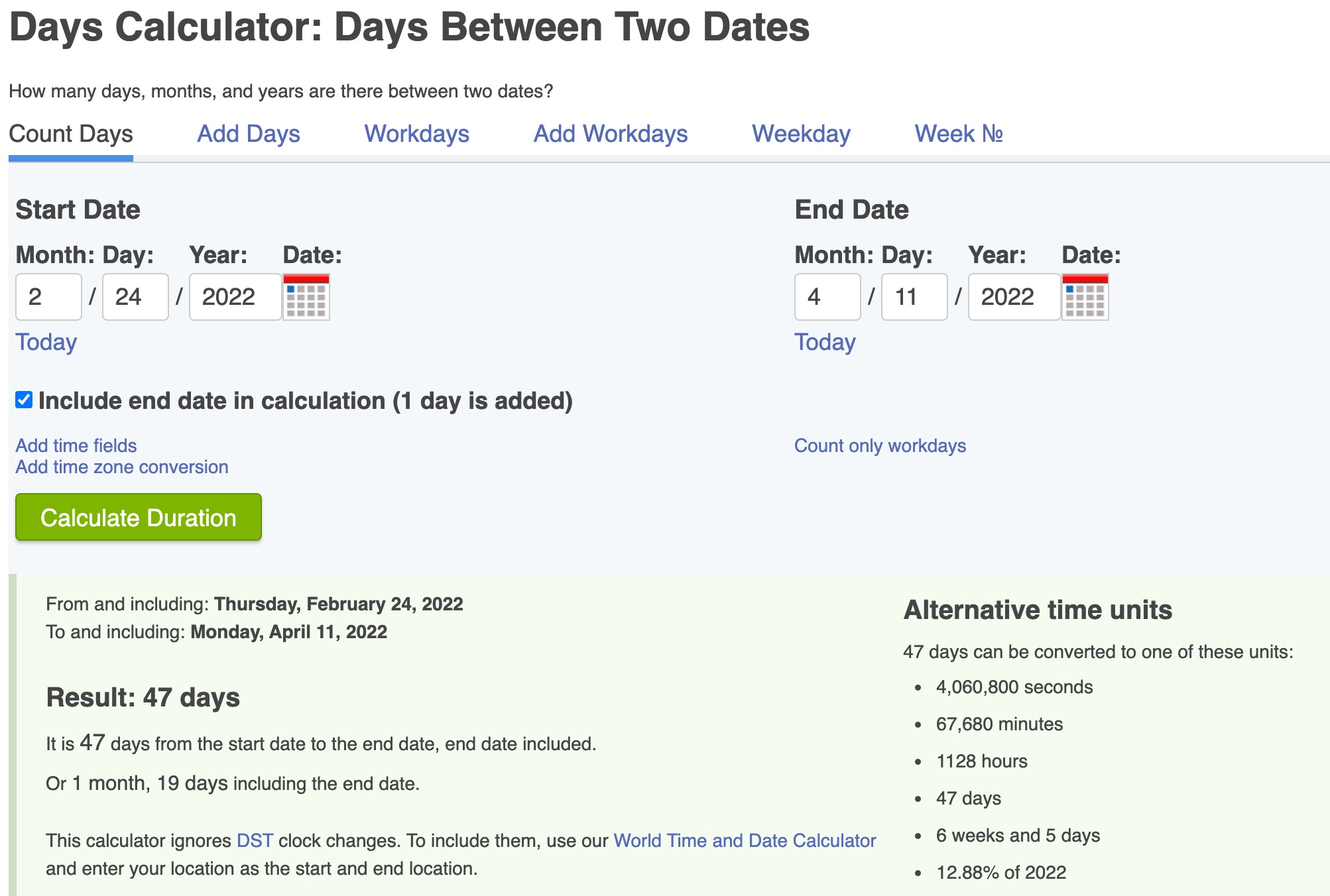 Again, the Imgur post was shared on April 13 2022 — adding two more days to the “47 day” figure in the original post, which was accurate on the day it was posted.

An April 11 2022 post to Reddit’s r/ukraine asserted that it was “day 47” of Russia’s invasion, and that Ukraine “lasted longer than France did in World War II.” The claim referenced France’s 1940 invasion by and surrender to German forces, which spanned 47 days. As of April 11 2022, Russia’s invasion had gone on for 47 days — equal to the number of days between France’s invasion and surrender. As of April 13 2022, Ukraine held off invading Russian forces for 49 days, longer than France resisted invading Germans in 1940.