On May 12 2021, an Imgur post purportedly showed two tweets from all the way back in June 2014 by chain restaurant Jersey Mike’s (@jerseymikes), the first asking “how do you top your sub?”, and the second beginning, “blocked .blocked. blocked”: 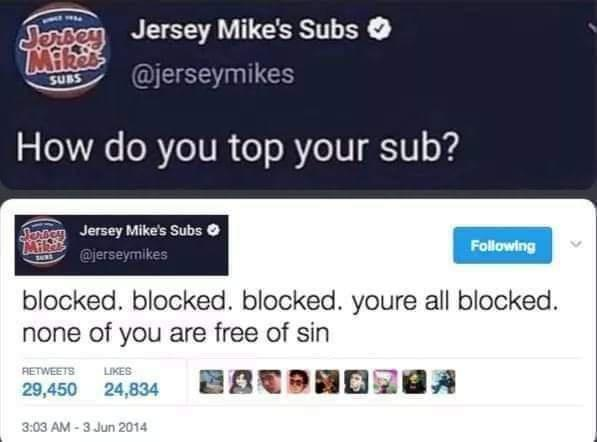 Imgur user jansenart was coy in their title (simply “I don’t get it”); the screenshot purportedly showed an initial, undated tweet by Jersey Mike’s, and a dated response which was presumably from around the same time. Together, they read:

[@jerseymikes] How do you top your sub?

Based on the date of the second tweet (June 3 2014), it seemed likely the “how do you top your sub?” tweet was also from early June 2014. The second screenshot suggested that the tweet received nearly 30,000 retweets and almost 25,000 likes.

When the image was shared to Imgur on May 12 2021, the submitter quipped they “did not get” what was inherently a juxtaposition joke.

“How do you top your sub?” is a question that, in the context of sandwich chains, implied condiments and accoutrements like lettuce and tomato. But a clear, risqué double entendre enabled a different inference — namely, consensual sexual activity between a submissive (sub) and dominant (top) partner — further suggesting an avalanche of obscene Twitter responses to the question.

Versions of the meme including the response were popular on sites like iFunny, both with and without the second tweet. The overall meme seemed to be in circulation as of 2021, as evidenced by a popular April 2021 Tumblr post:

Did Jersey Mike’s (@jerseymikes) Tweet ‘How Do You Top Your Sub?’

References to and images of the purported tweet were rife on both the general internet and on Twitter in particular, creating a number of returned search results (more than 17 million) and various image iterations in attempts to locate the purported original tweet.

However, neither Twitter’s advanced search capabilities nor archival sites like the Wayback Machine included any such tweet from Jersey Mike’s in 2014. It was possibly tweeted and deleted, but also possibly fabricated to create the two-part joke seen in the screenshot.

Two related tweets from February 2019 demonstrated that internet users a) largely presented the tweet as authentic and b) relied primarily on screenshots as proof:

Twitter Advanced Search for “how do you top your sub” only returned three results between 2012 and 2019: one in 2012 from a small sub shop, one in 2014 from one account to another, and one in 2015 from a Canadian mall. Sorted by latest, descending, the fourth oldest tweet was from 2019 and referenced Jersey Mike’s:

"How do you top your sub." or something very similar from Jersey Mike's main account XD

The February 2019 tweet above was in response to a retweet of a deleted tweet, which the user described as the Jersey Mike’s “how do you top your sub?” tweet. Its URL was https://twitter.com/jerseymikes/status/1098287418527096832, it was not archived in any place we searched, and it appeared to have been tweeted in February 2019 (not June 2014).

We were unable to substantiate the authenticity of the first tweet, but it was not implausible that Jersey Mike’s tweeted it, got salacious responses, and deleted in in February 2019 (possibly on February 20 2019). It often appeared without the second tweet as a standalone meme:

Here are my favorite brand tweets, almost all of these have been deleted but all of them are real. pic.twitter.com/Kai2sIGIYu

Another popular variation included an “UN-DELETE THIS TWEET” response:

By March 2021, another verified account for a sandwich chain appeared to attempt to replicate the virality of the Jersey Mike’s tweet, but it looked as if Twitter didn’t take the bait this time around:

How do you top your sub? pic.twitter.com/QeI6lxuZRE

Where does the "None of you are free of ____" Jesus meme come from? from OutOfTheLoop

KnowYourMeme.com’s entry “None Of You Are Free Of Sin” further explained:

None Of You Are Free Of Sin is a quote from a tweet by Weird Twitter user Dril. It has become a popular snowclone on Twitter, as well as a snowclone used with an exploitable Chick Tract … The popularity of the tweet made it often quoted in Twitter snowclones where the poster is expressing disgust.

A May 12 2021 Imgur post suggested that Jersey Mike’s first tweeted “How do you top your sub?”, followed by a June 2014 response tweet reading “blocked. blocked. blocked. youre all blocked. none of you are free of sin.” Piecing together items to follow a trail of memes, Tumblr posts, deleted tweets, date-stamped references, and image searches indicated that Jersey Mike’s quite likely tweeted and deleted the “top your sub” question on or around February 20 2019. At some point thereafter, a meme maker appended @dril’s “blocked. blocked … none of you are free from sin” tweet from June 2014 as a joke. And by March 2021, it looked like a different sandwich chain attempted to attract the viral attention unwittingly caused by Jersey Mike’s. Nevertheless, the juxtaposition tweet in constant circulation was inauthentic, attaching @dril’s June 2014 tweet to the existing Jersey Mike’s “top your sub” meme.