Jim Carrey tweeted "It’s really sad that so much of our society says ‘Thank god it’s Friday’. Thank god 5 out of 7 days of my life are over. Now I’m gonna spend 2 of those 7 days drunk so I don’t have to think about the upcoming 5/7 of my week."

On January 14 2022, an Imgur user shared the following purported tweet, attributed to Jim Carrey and referring to the standard five of seven days workweek: 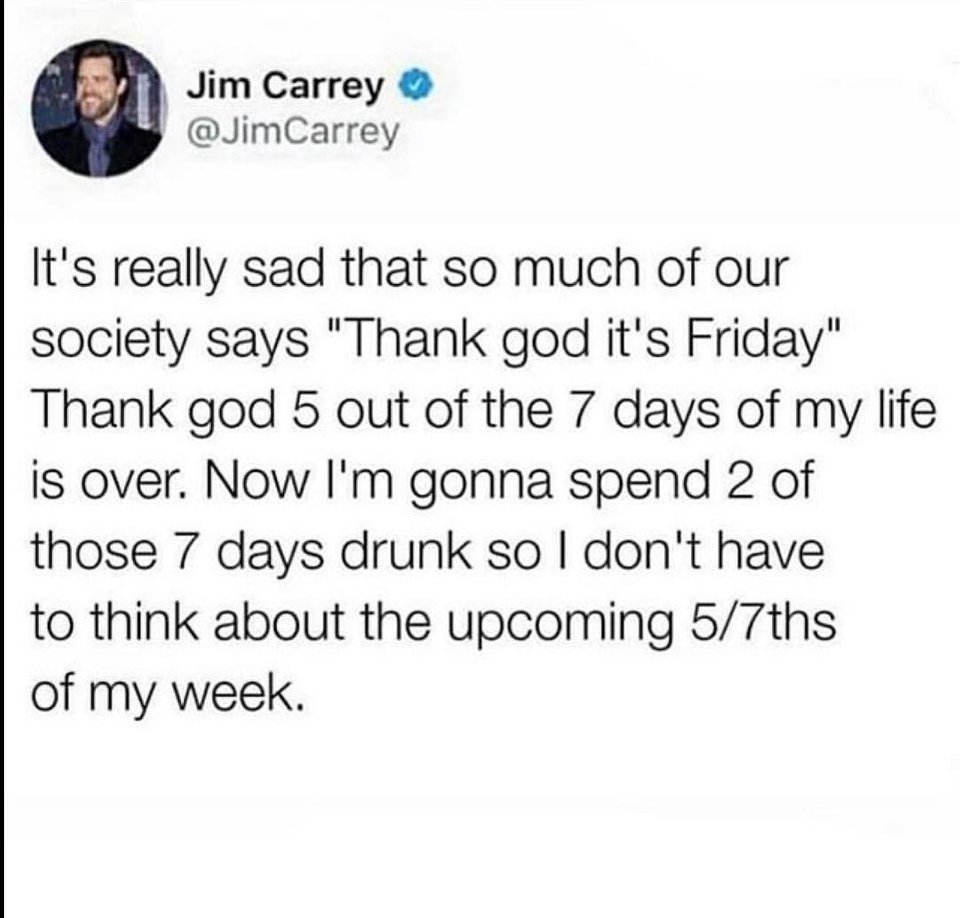 It’s really sad that so much of our society says “Thank god it’s Friday” Thank god 5 out of the 7 days of my life is over. Now I’m gonna spend 2 of those 7 days drunk so I don’t have to think about the upcoming 5/7ths of my week.

On January 2 and 3 2022, the image was shared to the subreddits r/freefromwork and r/antiwork (twice), and in December 2018, it was shared to r/WhitePeopleTwitter:

Unfortunately, that’s the truth. from WhitePeopleTwitter

Notably, all three screenshots — one in late 2018, one in early 2022 — were identical. All three lacked elements like a date or timestamp, and the image always had distorted pixels around the top and a black bar at the right.

At least one Reddit user observed the distortion, commenting on the 2018 thread:

In response, a fellow Redditor called the user a “real Debbie Downer.” The screenshot also spread in text-quote format, such as at the beginning of a February 2020 Medium post:

Jim Carrey said it best when he tweeted: “It’s really sad that so much of our society says “Thank god it’s Friday” Thank god that 5 out of the 7 days of my life is over. Now I’m gonna spend 2 of those 7 days drunk so I don’t have to think about the upcoming 5/7ths of my week.”

I say this tongue in cheek but not too long ago, I would have scoffed and told Jim Carrey to go back to being a funny man.

In January 2022, the quote was widely attributed to Carrey, but the earliest iterations we dug up were from around mid-December 2018. On December 14 2018, a Facebook user shared the quote as a status update without the attribution to Carrey.

A search on Twitter for Carrey’s handle (@JimCarrey) and “thank god” didn’t locate the tweet in question. We were unable to locate any manual retweets indicative of a deleted tweet, nor did Google search turn up any evidence Carrey had ever tweeted the sentiment.

Prior to late 2018, the quote circulated — but it was not attributed to Carrey. In October 2017, a stand-up meme shared to the subreddit for Parks and Recreation attributed the quote to Nick Offerman:

Nick Offerman on ‘Getting Drunk at Olive Garden’. from PandR

An undated Medium user’s post, “‘Tonight You’re Taking It in the Pail:’ Nick Offerman’s Ten Tips for a Prosperous Life,” provided a transcription for a Nick Offerman stand-up show in New York City in 2013. It read in part:

And I can’t talk about tips for prosperity without talking about the joy of work, finding work that you love.

It’s so sad that so much of our society says, “Man, thank God it’s Friday. Thank God five of the seven days of my life are fucking over, because I hate five-sevenths of my life.

Now I’m gonna spend two-sevenths getting drunk at The Olive Garden so I don’t have to think about the upcoming five-sevenths. Thank God!”

Maybe it’s grow things in the garden or whatnot, fuck cantaloupes, whatever your thing is. It’s your business. I’m not asking questions.

But, I mean, work is a privilege. You just have to find the right work. I mean, we’ve got a long life to live, and you can’t just watch videos and hangout in the pool.

I’ve tried that. It’s cool for a minute, and then you’re super depressed. Like, “What, am I gonna just fuckin’ lay in the pool? I should be fucking making salad forks.”

We’ve lost the notion that working outside and working at things that take muscle or things that get you dirty—We’ve come to think of those types of work as being beneath us, and that’s wrong. Those kinds of work are really noble. It’s amazing.

The quote was not the first of its sort attributed to Carrey for apparent social media traction. In 2019, we examined a similarly popular claim that Carrey used social media to provide advice on depression:

Jim Carrey Depression Meme: ‘I Believe Depression is Legitimate. But…’

In January 2022, a long-circulating purported tweet from Jim Carrey circulated, quoting him as saying it was “really sad that so much of our society says ‘Thank god it’s Friday,’ thank god 5 out of the 7 days of my life is over …” There’s no evidence Carrey ever tweeted it, and apparently one “screenshot” of the “tweet” in circulation. Before it became attached to Carrey, the commentary was attributed to comedian and actor Nick Offerman from 2013.