Jim Carrey said: "Solitude is dangerous. It’s very addictive. It becomes a habit after you realize how peaceful and calm it is. It’s like you don’t want to deal with people anymore because they drain your energy."

On April 26 2022, an Imgur user shared a meme that attributed a quote to actor Jim Carrey about “solitude” being “addictive”:

Underneath a photograph of Carrey, text read:

“Solitude is dangerous. It’s very addictive. It becomes a habit after you realise how peaceful and calm it is. It’s like you don’t want to deal with people anymore because they drain your energy.” – Jim Carrey

Quote memes misattributed to Jim Carrey in particular are, for some reason, fairly common. We examined two popular quotes inaccurately attributed to the actor, one pertaining to the causes of depression, and one about unhappy workers:

The solitude quote and attribution weren’t new in April 2022; a Reddit user shared it to r/AskReddit in January 2021. Again, no source for the quote was included (nor did any source appear on a 2019 Twitter iteration):

Jim Carrey once said, “Solitude is dangerous. It’s very addictive. It becomes a habit after you realize how calm and peaceful it is. It’s like you don’t want to deal with people anymore because they drain your energy.” As an introvert, how do you feel about this quote? from AskReddit

In December 2020, the quote and attribution to Carrey appeared on Goodreads, a site that regularly features misattributed quotes. And in November 2017, the quote was shared by a Tumblr user. No additional information was included, such as the context or origin of the quote:

We located a September 2018 Vulture.com article (outside the pre-December 2017 range, headlined “Let These Jim Carrey Quotes Blow Your Mind, Man”) with quotes by Carrey from a contemporaneous New York Times profile on the actor. One of the sections was titled “On Solitude,” but it didn’t match the meme:

On Poland:
“Poland was a rainy place with a lot of crows, man, and it was beautiful.”

On whether or not he’s having an existential crisis:
“I don’t have a crisis anymore. I know I don’t exist.”

On solitude:
“I love being in the midst of people, and I also abso-[expletive]-lutely love to be alone in my life. I love my empty [expletive] halls that I walk down, and talking to myself and whatever it is I want to do.”

The above-linked November 2017 Tumblr iteration was the oldest we found, suggesting that if Jim Carrey were the originator of the quote, it likely appeared in an interview or similar content before that date. We searched for “Solitude is dangerous,” “it’s very addictive,” and “it becomes a habit” without Jim Carrey’s name, and restricted the results to anything dated on or before December 1 2017.

In total, only twelve results were returned. Most of the links were misdated, such as the Goodreads link from December 2020 — pinned to the top as a “Google Highlight,” and incidentally crediting Carrey as an author of Memoirs and Misinformation: 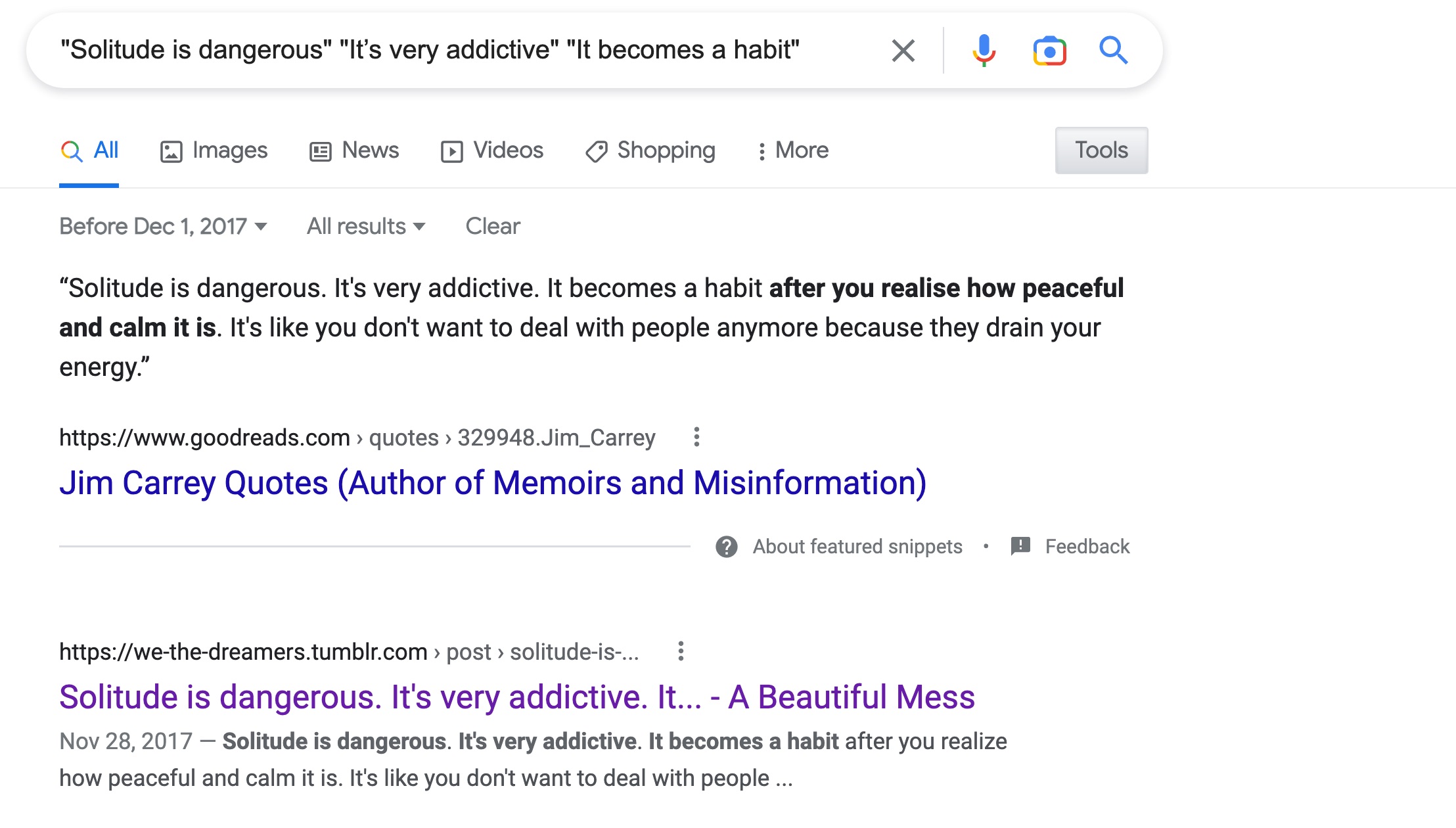 A long-circulating meme claimed that actor and comedian Jim Carrey said: “Solitude is dangerous. It’s very addictive. It becomes a habit after you realize how peaceful and calm it is …” The meme was shared to Imgur on April 26 2022 and once again proved popular, but there was no indication Carrey was the quote’s originator. It was similar in tone to two additional quote memes attributed to Carrey, all of which broadly lamented the restrictions and conventions of modern day life. As is often the case with misattributed quotes, attaching the name of a celebrity — typically Frida Kahlo, Jim Carrey, Tim Allen, Morgan Freeman, or Dave Ramsey — seemed to convert random observations to viral quotes.