Contrary to what critics claim, Democratic presidential nominee Joe Biden’s non-combatant status during the Vietnam War was not underreported prior to his 2020 campaign.

Regardless, one Facebook user amassed more than 189,000 shares by claiming, “Won’t see this anywhere” above a high school photograph of Biden and the caption, “Lifeguard/football player Joe Biden got five draft deferments for asthma during Vietnam.” 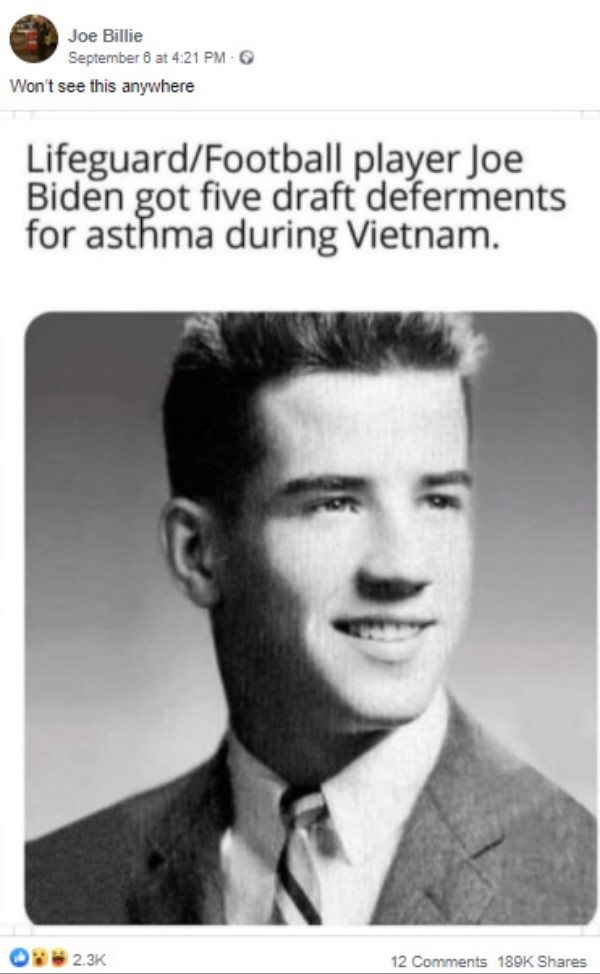 Biden publicly discussed his deferments in a Washington Post profile published in June 1987, amid his first presidential campaign:

Biden says he received a draft notice after graduating from law school, but failed the physical because of an asthma condition. He had hoped to be a pilot.

“My feeling about it at the time was like a lot of things in my life have been: That there must have been a reason for it. I was prepared to go. I was not anxious to go, because I didn’t think, ‘My God, I can hardly wait to go and join the military.'”

After Biden was tapped as U.S. President Barack Obama’s running mate in September 2008, their campaign released Biden’s Selective Service records following a request by the Associated Press, which subsequently reported:

According to the documents, Biden, 65, received several deferments while he was an undergraduate at the University of Delaware and later as a law student at Syracuse University. A month after undergoing a physical exam in 1968, Biden received a Selective Service classification of 1-Y, meaning he was available for service only in the event of national emergency.

“As a result of a physical exam on April 5, 1968, Joe Biden was classified 1-Y and disqualified from service because of asthma as a teenager,” said David Wade, a campaign spokesman.

In “Promises to Keep,” a memoir that was published last year and became an instant bestseller after he was tapped as Obama’s running mate, Biden never mentions his asthma, recounting an active childhood, work as a lifeguard and football exploits in high school.

Biden’s opponent in the 2020 presidential election, incumbent Donald Trump, also received five deferments during the war, one of which he has claimed was due to bone spurs in his heels.

But Trump’s account has come under question on several occasions.

In December 2018, the daughters of Dr. Larry Braunstein told the New York Times that Braunstein, a podiatrist, had told them prior to his death in 2007 that he did Trump’s father “a favor” in providing him a diagnosis qualifying him for deferment from the war:

“What he got was access to Fred Trump,” Elysa Braunstein said. “If there was anything wrong in the building, my dad would call and Trump would take care of it immediately. That was the small favor that he got.”

No paper evidence has been found to help corroborate the version of events described by the Braunstein family, who also suggested there was some involvement by a second podiatrist, Dr. Manny Weinstein. Dr. Weinstein, who died in 1995, lived in two apartments in Brooklyn owned by Fred Trump; city directories show he moved into the first during the year Donald Trump received his exemption.

Dr. Braunstein’s daughters said their father left no medical records with the family, and a doctor who purchased his practice said he was unaware of any documents related to Mr. Trump. Most detailed government medical records related to the draft no longer exist, according to the National Archives.

“Mr. Trump claimed [his medical deferment] was because of a bone spur, but when I asked for medical records, he gave me none and said there was no surgery,” Cohen told members of the House Oversight Committee. “He told me not to answer the specific questions by reporters but rather offer simply the fact that he received a medical deferment.

“He finished the conversation with the following comment: ‘You think I’m stupid, I wasn’t going to Vietnam.'”

Trump was further criticized following a September 2020 report in The Atlantic saying that he referred to dead U.S. soldiers as “losers” and “suckers.”

That same month, Trump was also criticized by Creedence Clearwater Revival singer/songwriter John Fogerty for using his song “Fortunate Son” — which took aim at the abuse of deferments by the rich to avoid serving in Vietnam.

“I find it confusing, I would say, that the president has chosen to use my song for his political rallies, when in fact it seems like he is probably the fortunate son,” Fogerty told Rolling Stone.