"I just tested positive for coronavirus. Can any one help pray for me and also share to Facebook groups so I can get more prayers?"

On July 25 2020, Facebook user Stiven Flores shared the following photograph, with a claim he had “just tested positive for coronavirus” and an aggressive push for others to share the post in order to collect “prayers”:

Alongside a photograph of a child inexplicably wearing a neck brace, Flores wrote:

That account’s Facebook timeline frequently featured stolen photographs of ill or injured children, and text urging users to share the images or posts to “get more prayers.” Some of the posts threatened that readers would experience “bad luck” if they didn’t share the posts.

Origin of the Image

In the comments of Flores’ post, a Facebook user (whose name we have redacted to preserve their privacy) said that the photo actually showed their son:

[Stiven Flores] doesnt have Covid this is my son. He was in a longboard crash. I have reported this photo a dozen times Facebook wont take it down. 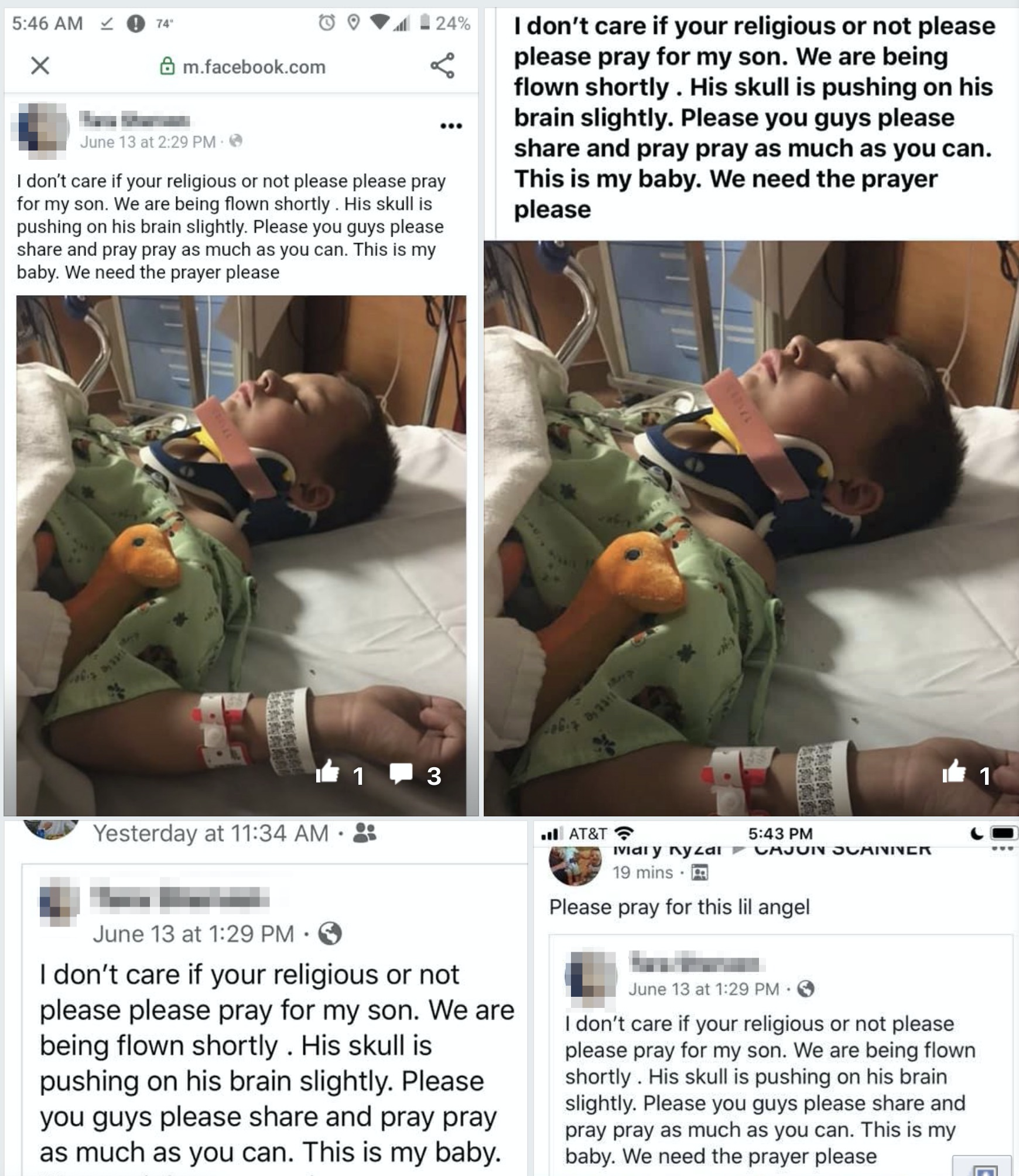 I don’t care if [you’re] religious or not please please pray for my son. We are being flown shortly . His skull is pushing on his brain slightly. Please you guys please share and pray pray as much as you can. This is my baby.

A Brief History of Engagement Bait and Related Scams

Flores’ unauthorized, unwanted use of the original poster’s image was a tactic known broadly as engagement bait, a topic that we have repeatedly addressed in previous fact checks.

On December 18 2017, Facebook claimed that it would downrank engagement bait and make it less visible in feeds — an algorithm change that didn’t seem to limit the reach of Flores’ posts:

People have told us that they dislike spammy posts on Facebook that goad them into interacting with likes, shares, comments, and other actions. For example, “LIKE this if you’re an Aries!” This tactic, known as “engagement bait,” seeks to take advantage of our News Feed algorithm by boosting engagement in order to get greater reach. So, starting this week, we will begin demoting individual posts from people and Pages that use engagement bait.

Additionally, over the coming weeks, we will begin implementing stricter demotions for Pages that systematically and repeatedly use engagement bait to artificially gain reach in News Feed. We will roll out this Page-level demotion over the course of several weeks to give publishers time to adapt and avoid inadvertently using engagement bait in their posts. Moving forward, we will continue to find ways to improve and scale our efforts to reduce engagement bait.

Despite this announcement, engagement bait posts proliferated on the platform nearly three years after Facebook pledged to downrank and suppress it.

Does This Grandma Want You to Share Her Photo to Mark Her 100th Birthday?

As we explained in the page above, engagement bait is a boon to bad actors leveraging Facebook’s many flaws and weaknesses:

One reason is what is sometimes called “like-farming.” Facebook’s algorithms prioritize “engagement,” which means gathering “likes” and “shares” is all-important within that medium.

Like-farmers will gather clicks and likes and responses, which supposedly indicate popularity and engagement, then scrub the original content and replace it with something else, like an ad, to bypass Facebook constraints.

And then there’s clickbait, also known as response-farming. It’s often used by existing, legitimate companies in order to increase their online profiles. Unfortunately, it can also be used by grifter types to direct unsuspecting people to click on their ads, which can lead to malware infestations or force your Facebook account to share updates (or worse) without your knowledge or consent.

In another fact check, we added:

In some cases, engagement bait is presented as it is in the manner above — simply by using Facebook’s structure in a dishonest way to boost a page’s statistics. In that format, occasionally a pointless action is requested from users in order to create the artificial impression of an interested user base. Sometimes the page then undergoes a transformation, changing its name and description after a certain number of users join the group or page.

But in other applications, engagement bait has more sinister connotations. Pages and entities of dubious intent entice people to engage with a page to rapidly build an audience, often offering phony enticements or giveaways. In the case of the pug-with-an-avocado, the standard 10 or 25 cents “donation” plea was raised to a dollar, likely driving the six-figure share count on the post.

That engagement can have unpleasant consequences for those interacting with questionable content:

Like-farming victims often soon find their profiles tacitly endorsing scams, hate pages, and other unpleasant endeavors that are unlikely to accrue engagement through legitimate means. Genuine contests and giveaways, particularly of valuable experiences or objects, are extremely rare; furthermore, they are almost always conducted through official channels for big-name brands and well-known companies.

It isn’t uncommon for brands and other businesses to leverage engagement bait in order to increase their reach, but the tactic is also favored by multi-level marketing (MLM) scammers seeking recruits:

An undated ConsumerAffairs.com post outlined some of the risks of interacting with engagement bait, as well as its frequent manipulation of users’ emotions (often in related offshoots of clickbait known as “rage bait” or “outrage bait“):

… once the page has a sufficiently high popularity rating, the like-farmer either removes the page’s original content and replaces it with something else (usually malware or scam advertising); leaves the page as is and uses it as a platform for continued like-farming in order to spread malware, collect people’s marketing information or engage in other harmful activities; or outright sells the highly liked site to cybercriminals in a black market web forum.

A long and rapidly-spreading post on Facebook claiming that the poster had recently tested positive for COVID-19 and asking if anyone can “help pray for me and also share to Facebook groups so I can get more prayers” featured a stolen photograph of a child injured in June 2020. That post was clearly engagement bait, shared on a page consisting primarily of similar content. Despite Facebook’s pledge to downrank engagement bait in December 2017, engagement bait, like-bait, and outrage bait continued to spread unchecked across the platform.