Images show former "a wire" or "an IV" on former U.S. Vice President Joe Biden's wrist as he coughed into his sleeve during a presidential debate.

During the September 29 2020 presidential debate, a purported “wire” seen on Democratic Party nominee Joe Biden’s wrist as he coughed into his sleeve predictably became a hot topic on social media, with increasingly conspiratorial and hysterical rumors pushed along by the usual disinformation purveyors:

In the above tweet, actor James Woods simply shared an image of an object visible on Biden’s wrist, concealed by his sleeve. Other iterations were shared on Twitter, as well as Facebook:

So Biden has a mysterious wire in his coat and what looks like an IV port in his wrist. pic.twitter.com/pDrEFAtcHF

Although the reddish-brown object on Biden’s wrist was typically described as a “wire,” others suggested it was an intravenous port, or IV. None of the posts we located explained any mechanism by which such a “wire” might work, how it might provide Biden with an advantage in the debate, or why, in 2020, Biden wouldn’t simply rely on wireless technology.

In popular culture, the concept of surreptitiously wearing a wire is commonplace in film and on television — typically in plotlines in which a character is fitted with recording equipment to capture evidence that another character is engaging in criminal behavior.

Normally, wearing a wire is associated with transmitting a recording versus receiving it. We located no variations on the rumor in which anyone described the manner in which they believed Biden was receiving assistance via a “wire,” nor did anyone seem to explain why he might be fitted with an IV.

Woods seemed to heavily imply that Biden managed to evade the microphone with which he was also wired, and feigned a cough to request assistance through the device on his wrist. But such a gambit also seemed risky, as a sensitive microphone could pick up a request whispered into a sleeve cuff.

We are unaware of any indication that Biden signaled for off-camera help during the September 29 2020 debate.

On September 29 2020, the debate commenced at 9 PM Eastern, 6 PM Pacific; twelve minutes after the debate started, searches for “Biden’s wrist” spiked, along with related terms: 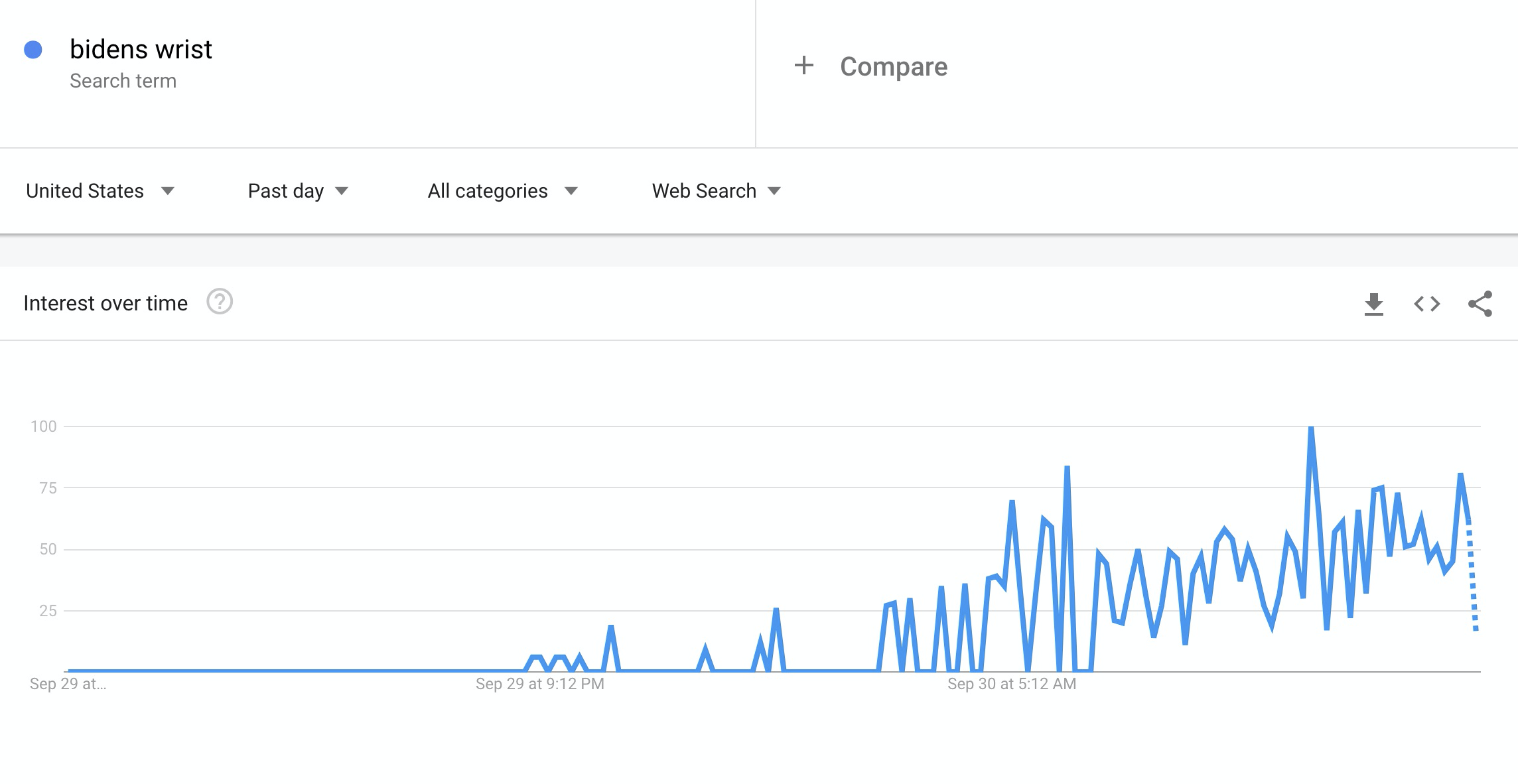 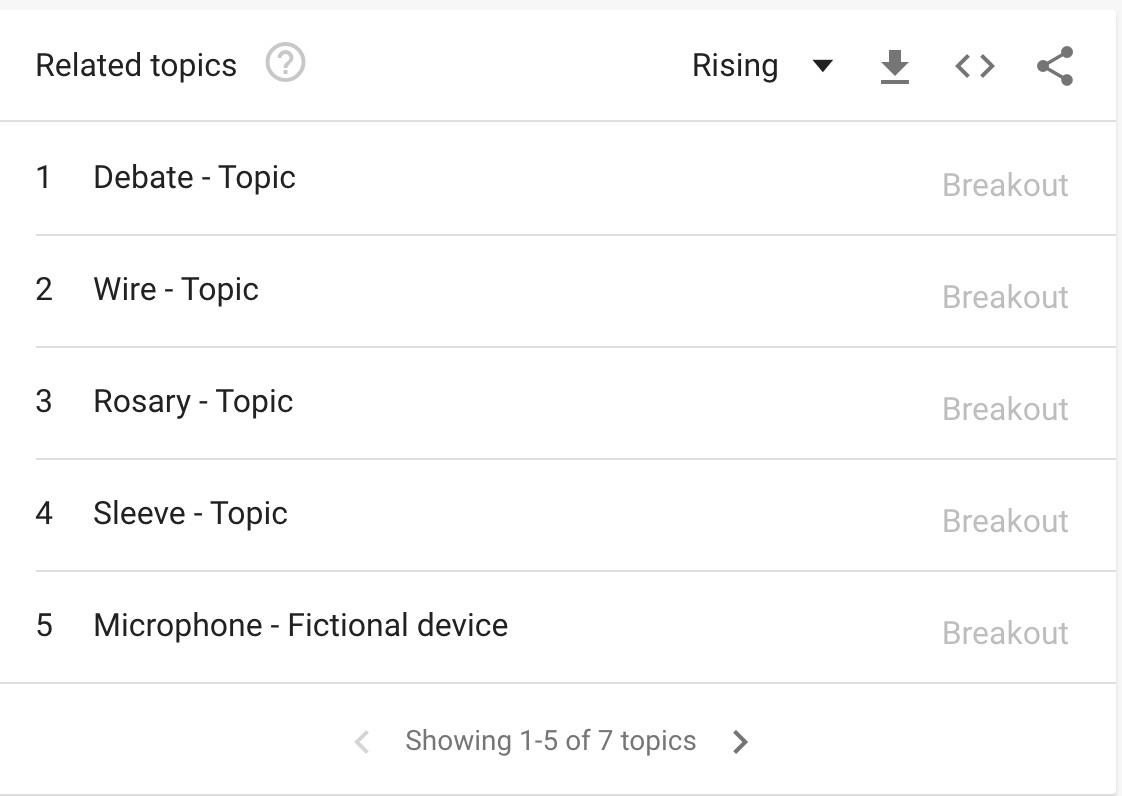 It is true grainy screenshots showed an object partly obscured by Biden’s sleeve cuff during the debate.

As for what’s it is, the answer just so happened to be widely covered prior to the debate. In November 2017, Biden appeared on Megyn Kelly’s talk show and discussed the object he wears on his wrist at all times:

Sitting beside wife Dr. Jill Biden, the former vice president opened up about the [rosary] he wears around his wrist, which he said connects him to his late son.

“I have not taken off the rosary Beau was wearing when he passed, since then. It is my connection with him,” Biden said.

Joseph “Beau” Biden III died at the age of 46 after a two-year battle with brain cancer. The younger Biden had served as Delaware’s attorney general from 2007 to 2015 and had planed to run for governor of Delaware in 2016.

An August 24 2020 Wall Street Journal editorial about Biden’s faith began by describing the former Vice President’s rosary as possibly the “most famous beads in the world”:

By now Joe Biden’s rosary must be the most famous beads in the world.

“The cradle Catholic who carries a rosary wherever he goes,” reports the Jesuit magazine America. “Biden almost always has rosary beads in his pocket,” says the Washington Post. Even Rolling Stone piously chimes in, presenting the former vice president as a “practicing Catholic” who “wears his late son Beau’s rosary on his wrist.”

It all feeds Mr. Biden’s image as the scrappy Irish Catholic kid from Scranton, Pa.

Just before and after the two-minute mark in a video of Biden on Kelly’s show, he discusses the rosary on his wrist. During that portion of his appearance, the camera zooms in on Biden’s rosary — which on the same wrist and is the same reddish-brown color as the object briefly spotted during the break: 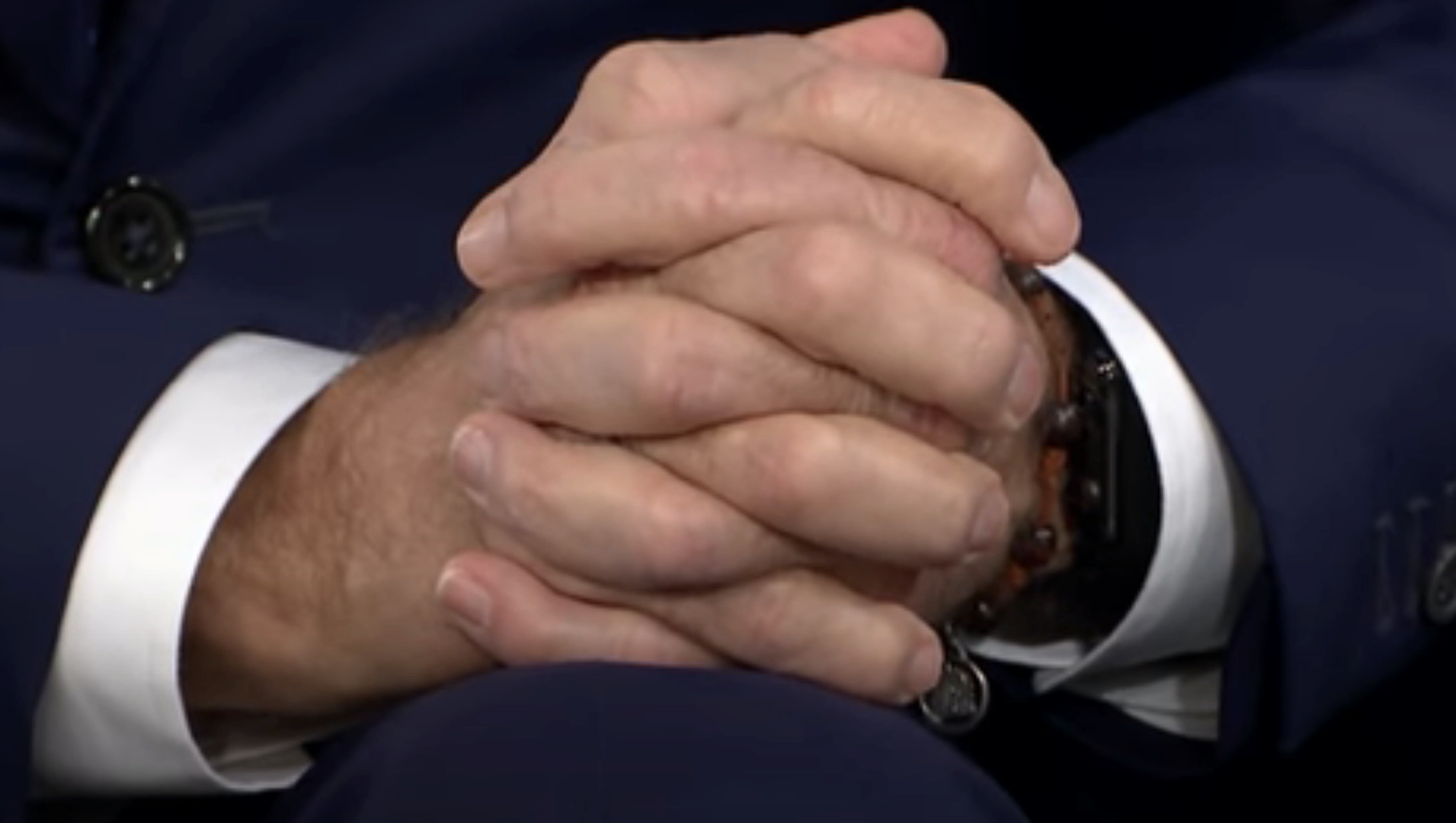 In candid images where Biden is wearing a short sleeve shirt, Beau Biden’s rosary is typically visible on his wrist:

Myriad social media posts claimed the reddish-brown object on Joe Biden’s wrist during the his September 29 2020 presidential debate with Donald Trump was “a wire.” However, Biden’s habit of wearing son Beau Biden’s rosary at all times on his wrist is well-documented both in news articles and in images and video. Further, wireless technology is so common in 2020 as to be ubiquitous, making the need for “a wire” completely obsolete; we consider the “IV” claim to be so ridiculous (as there are many far less obvious places to hide an IV than out in plain view on one’s wrist during a debate on a stage from behind a podium) as to not even be worth fact-checking. We rate these entirely specious claims as Not True.