CNN reported that the corona virus was listed for the death of a couple that was actually killed in a meth lab explosion.

A meme crudely making light of the COVID-19 pandemic by imitating a news report cycled through at least three different iterations as it recirculated online again and again through social media.

The graphic shows a damaged building alongside a mocked-up version of a CNN headline reading “Couple Dies of Corona Virus [sic] in Meth Lab Explosion.” Most of the iterations we found include a note marking a city in Arkansas as its dateline.

One variation on the meme, allegedly posted on April 25 2020, places the house in Pine Bluff and also contains a fake news ticker with the headline, “[Joe] Biden endorses [Bernie] Sanders after forgetting he is the presumptive nominee.” 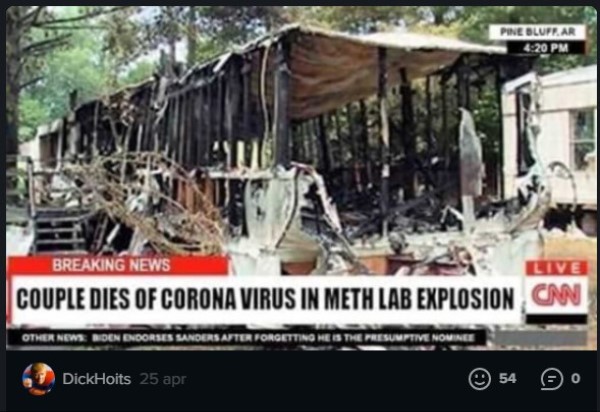 The second version of the graphic shows a burned-out house with the dateline changed to Little Rock, and a different fake ticker mocking Canadian Prime Minister Justin Trudeau by claiming that he is in self-isolation “for the good of all Canadians.” 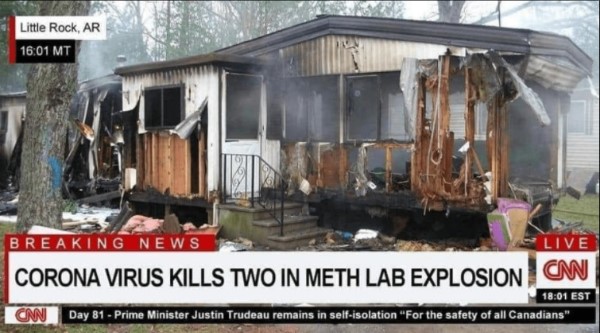 We spotted the Little Rock version of the meme posted in June and July 2020, along with a third version more obviously presented as a parody, placing the “report” in the south Texas city of Vidor while retaining the fake anti-Trudeau ticker. According to a search on the photo listing site TinEye, the graphic circulated yet again in September 2020 with a rash of posts on Tumblr.