A false interpretation of new data from the Centers for Disease Control and Prevention (CDC) spread online in late August 2020, buoyed by both social media and various local television news outlets.

The result was a slew of posts and stories pushing the claim that only 6 percent of deaths attributed to COVID-19 were a direct result of the virus rather than “underlying conditions,” a major distortion of an update posted by the agency on August 26 2020.

Specifically, these reports and posts distorted a section dealing with co-morbidities, defined by the agency as “the types of health conditions and contributing causes mentioned in conjunction with deaths”:

As follow-up stories reported, that statement was twisted online to claim that the CDC “admitted” that 9,210 out of the 153,504 reported deaths during the COVID-19 pandemic were due to the virus itself and that 94 percent of COVID-19-related deaths “had 2-3 other serious illnesses and were of very advanced age.”

The claim was amplified on Twitter by United States President Donald Trump, who shared a post that was later removed for violating the platform’s terms of service: 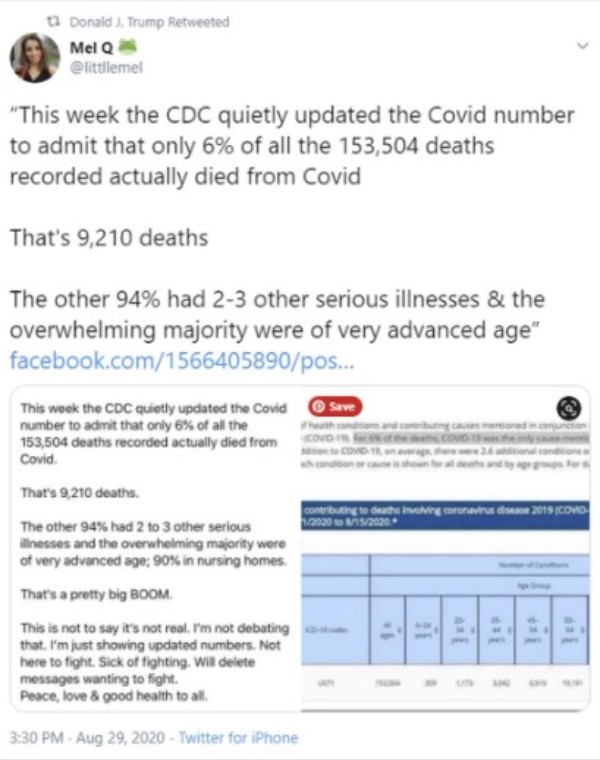 BuzzFeed also reported that the same misleading statistic was shared by a Twitter account run by staffers for former presidential candidate Herman Cain, who literally had died from the coronavirus less than a month before, on July 30 2020: 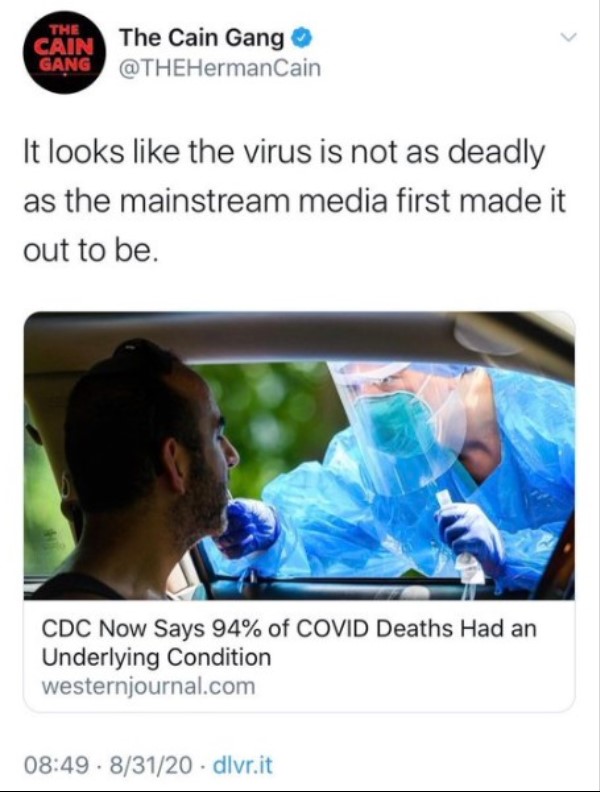 The false claim was spread even further via wire services catering to local television news outlets. As Dr. Akiva Diamond, an assistant professor of medicine in hematology and oncology at the Baylor University College of Medicine, pointed out on Twitter, several stations ran identical headlines stating,”CDC: 94% of Covid-19 deaths had underlying medical conditions.”

Diamond wrote that the illnesses listed by the CDC as co-morbidities — including acute respiratory distress syndrome (ARDS), pneumonia (PNA), renal failure, and cardiac arrest among others are directly caused by the infection, and are not “unrelated pre-existing conditions.”

Not sure if this is intentional but news outlets are butchering this headline. Most common comorbidities listed include ARDS, PNA, renal failure, cardiac arrest, respiratory failure-> these disease are directly caused by the infection not unrelated pre-existing conditions pic.twitter.com/qn6xfo6z53

As epidemiologist Gideon Meyerowitz-Katz (or Gideon MK, as he is known online) explained, confusion regarding the CDC’s data could come from a misreading of standardized death certificates, which allow medical practitioners to list both the immediate and underlying causes of death:

As an example, say someone has lung cancer, and dies in hospital of an infection after having a lung removed. The immediate cause of death is the infection, which occurred due to complications of the lung removal, which was ultimately caused by the underlying issue of lung cancer. In the same way, someone who gets COVID-19, which causes respiratory failure, and then dies of kidney failure due to being on a ventilator would have at least three things on their form — the immediate cause, kidney failure, the secondary cause, respiratory failure, and the underlying cause, COVID-19.

When you see that “only 6 percent” of people had COVID-19 as the sole reason listed on their death forms, what it means is that there were only a small fraction of people who died of the disease who didn’t have any other underlying or immediate causes noted by the medical certifiers.

The 6 percent of COVID victims with no other causes listed on their death certificates, he said, likely did not have any other immediate or underlying causes listed alongside it.

“One way of looking at the precise number is to ask how many COVID-19 deaths had coronavirus as the UNDERLYING cause. That is, the cause that precipitated any other issues, or the thing that actually killed a person,” he wrote.

Meyerowitz-Katz reported that according to the CDC, the virus was the underlying cause in 95 percent of deaths. As of August 31 2020, the agency has reported 182,622 deaths from COVID-19 in the U.S.

The overwhelming number of deaths, over 75 percent, occured in people who had at least four comorbidities. So really, these are people who were unwell to begin with. And yes, really encouraging news in the context of Omicron. This means not only just to get your primary series, but to get your booster series. And yes, we’re really encouraged by these results.

The CDC director just said over 75% of “covid deaths” occurred in people with at least four comorbidities. Since Biden can’t shut down covid, suddenly all this data is getting shared publicly. pic.twitter.com/NKvproy3lx

The unabridged version of the interview, though, adds more context. She said:

You know, really important study, if I may just summarize it. A study of 1.2 million people who were vaccinated between December and October and demonstrated that severe disease occurred in about 0.015 percent of the people who received their primary series, and death in 0.003 percent of those people.

Walensky was discussing the results of a study measuring outcomes for 1,228,664 people who received vaccinations against COVID-19 between December 2020 and October 2021. According to that study:

Among 1,228,664 persons who completed primary vaccination during December 2020–October 2021, severe COVID-19–associated outcomes (0.015 percent) or death (0.0033 percen) were rare. Risk factors for severe outcomes included age [greater than or equal to] 65 years, immunosuppressed, and six other underlying conditions. All persons with severe outcomes had at least one risk factor; 78 percent of persons who died had at least four.

In total, 2,246 people surveyed developed COVID-19 after their vaccinations; of those, 36 people died, with 28 of them showing “at least four” risk factors.

However, Rolling Stone reported that advocates for disabled Americans criticized Walensky’s remarks as well as the CDC’s messaging overall.

“Her comments, even with the additional context, reveal the systemic and institutional biases against disabled people that determine our lives are inherently worth less,” said American Association of People with Disabilities president and CEO Maria Town.