In late August and early September 2020, discussion of Tinkerbell “dotting the i” in Disney’s animated logo became a hot topic on social media, with one apparently-removed Facebook post racking up a six-figure share count:

On August 27 2020, Facebook user Mckenzie Clayton shared a screenshot of what appeared to be her own share of an August 2019 post; Clayton’s screenshot included a Facebook flag indicating that the original violated Facebook’s Community Standards on spam. In the original, she commented “Musta been another simulation,” and shared an August 25 2019 post by Jere Le Bat:

Does anyone else vividly remember the Disney intro where Tinker Bell flies onto the screen does her magic dust thing making the castle [then] dotting the i in Disney sometimes her wand doesn’t work in some intros so she hits it a few times. Well apparently that never existed and there are absolutely no videos to prove it existed and i vividly remember seeing this as a child so im completely fucking stumped.

Clayton appeared to have taken a screenshot of her own flagged post, commenting “Hmmmmmmmmm…….” alongside the image. In the screenshot, the original poster (Jere Le Bat) also included a SoundCloud link, which many commenters speculated was the cause of the post’s removal (that is, spamming users by promoting a personal endeavor via a viral, unrelated post.)

As of September 1 2020, more than a hundred thousand readers had shared the post; many commented to say they remembered the same introduction, in which Tinkerbell dots the “i” in “Disney” with her wand, or taps it repeatedly to get it to work. Often, commenters expressed discomfort or difficulty with the concept that the Tinkerbell intro had never existed.

“I found a lot of intro videos with her in it, but none of them are quite what I remember. I specifically remember her hitting her wand a few times to get it working again, none of the videos I found do that. Maybe I’ll have to watch some old VHS tapes when I visit my family again”

The post was one of several viral discussions of threads about perceived changes to reality on social media.

A popular, wide-ranging thread on Twitter included the so-called “Mandela Effect” or “Mass Memory Discrepancy Effect (MMDE)” in a longer exposition examining whether the world “ended” in 2012:

Occasionally, “Mandela Effects” (or “MEs”) and MMDEs were easily explained misunderstandings, often involving somewhat lesser-known facts. Others were both more popular and more confusing, with some even involving hit films:

Or emojis that many people remembered but which never existed, such as the “missing hiker” or a “robber“:

A Brief History of Freakouts over the Tinkerbell ‘Dotting the I’ Memory, and the Origin of ‘Mandela Effect’

“Tinkerbell Disney intro” was slightly less popular, peaking later (in August 2019), and moving higher in August 2020. But the “Tinkerbell Mandela Effect” was not the first memory discrepancy of its type.

In 2009, paranormal investigator Fiona Broome first addressed what would become a long-discussed and wide-ranging pop culture phenomenon, owing to her initial confusion upon learning that — at the time — Nelson Mandela was still alive. Broome said she initially attributed her erroneous belief to inaccurate memory, but was surprised to learn others had the same incorrect recall. Broome updated her initial 2009 post upon Mandela’s actual death in 2013, and as of September 2020:

Nelson Mandela died in prison, long before his loss on December 5th, 2013.

Many people – perhaps thousands – seem to believe that.

That’s where the name of this phenomenon – and my original Mandela Effect website – came from.

I’m the person who first popularized that phrase, and here’s what I said, back in 2009, slightly updated with newer information.

See, I thought Nelson Mandela died in prison. I thought I remembered it clearly, complete with news clips of his funeral, the mourning in South Africa, some rioting in cities, and the heartfelt speech by his widow.

Then, I found out he was still alive.

My reaction was sensible, “Oh, I must have misunderstood something on the news.”

I didn’t think about it again for many years, until – in the VIP suite at Dragon*Con – a member of Security (“Shadowe”) casually mentioned that many people “remember” when Nelson Mandela died in prison.

That caught my attention in a hurry.

One thing led to another, and I discovered a large community of people who remember the same Mandela history that I recall.

Broome’s website, MandelaEffect.com, did not return any results for “Tinkerbell” or “Tinker Bell,” and the MMDE involving the Tinkerbell Disney intro was not counted as a “Mandela Effect” on her site. However, at around the same time the term was gaining traction, a commenter on Disney message board DISBoards.com published a forum post headlined: “Tinkerbell Opening — Am I Crazy?” That March 13 2012 post read:

I was having a debate with someone about Tinkerbell using a wand… and I said “She used to use it in the Disney opening… here I’ll find it on YouTube”. Except that I can’t find it.

I can find a couple of intros on YouTube but none of the ones I found had Tinkerbell in them.

I could have sworn that there was a version of one of the intros (similar to the above) that had Tinkerbell fly out, tap the top of the castle with her magic wand and the “sparkles” would cascade down around the spires and she would fly off towards the camera.

I don’t think [you’re] crazy. Isn’t that how all Disney movies begin?

On Reddit, the “Tinkerbell” discussion makes frequent appearances on r/MandelaEffect, typically posted by users discovering the discrepancy, or sharing evidence they believe explains the confusion:

Nooooooo! Tinkerbell is missing from all the Disney intros on their CDs and movies! from MandelaEffect

Everyone remembers the Disney Tinkerbell intro. Does anyone remember the one where her wand doesn’t work as expected and she has to shake it and smack it against something for it to work? from MandelaEffect

On the first of those three posts, one commenter describes their decades-old memories of Tinkerbell “dotting the i” in Disney:

I remember several variations. One being writing “Disney” in the air, then swooshing her wand to create an arch that the castle sort of fades through while stars and stuff fall from it. Another is that she comes up and taps the star above the castle’s top spire and the arch expands out from it and the letters all fill in. Then she flies up, breaks the 4th wall, and everything sort of wipes into the movie as she flies off to the right like she pulls it with her.

These are 20 year old memories though.

An October 2017 BuzzFeed post included Tinkerbell on a Mandela effect listicle, noting that several versions of the logo interstitial appeared over the years:

Many people distinctly recall an intro in which Tinker Bell flew across the screen writing out “Disney,” then dotted the “i” with her wand. While there are multiple Tinkerbell intros like this one, or this one, she doesn’t draw out Disney in them.

As the article noted, discourse about whether or not Tinkerbell “dotted the i” often involved links to YouTube clips spanning decades, all including the Tinkerbell character and the Disney logo. However, none seemed to match the description of Tinkerbell dotting the “i” specifically.

In one described as being from 1997, Tinkerbell appeared after the logo and her wand cleared the screen to subsequent content. In another described only as from the 1990s, Tinkerbell appeared and pointed her wand at the castle, after which the logo appeared. A third video, purportedly from the 1970s, showed Tinkerbell’s wand setting off fireworks — not dotting the logo’s “i.” A fourth video in the same thread advised users to skip ahead to 4:17, in a clip of myriad Disney intros. At that timestamp, the Disney logo appears before Tinkerbell, but again, she does not dot the “i.”

Commenters over the years (up to and including comments from September 1 2020) asked about the missing or absent Tinkerbell animation: 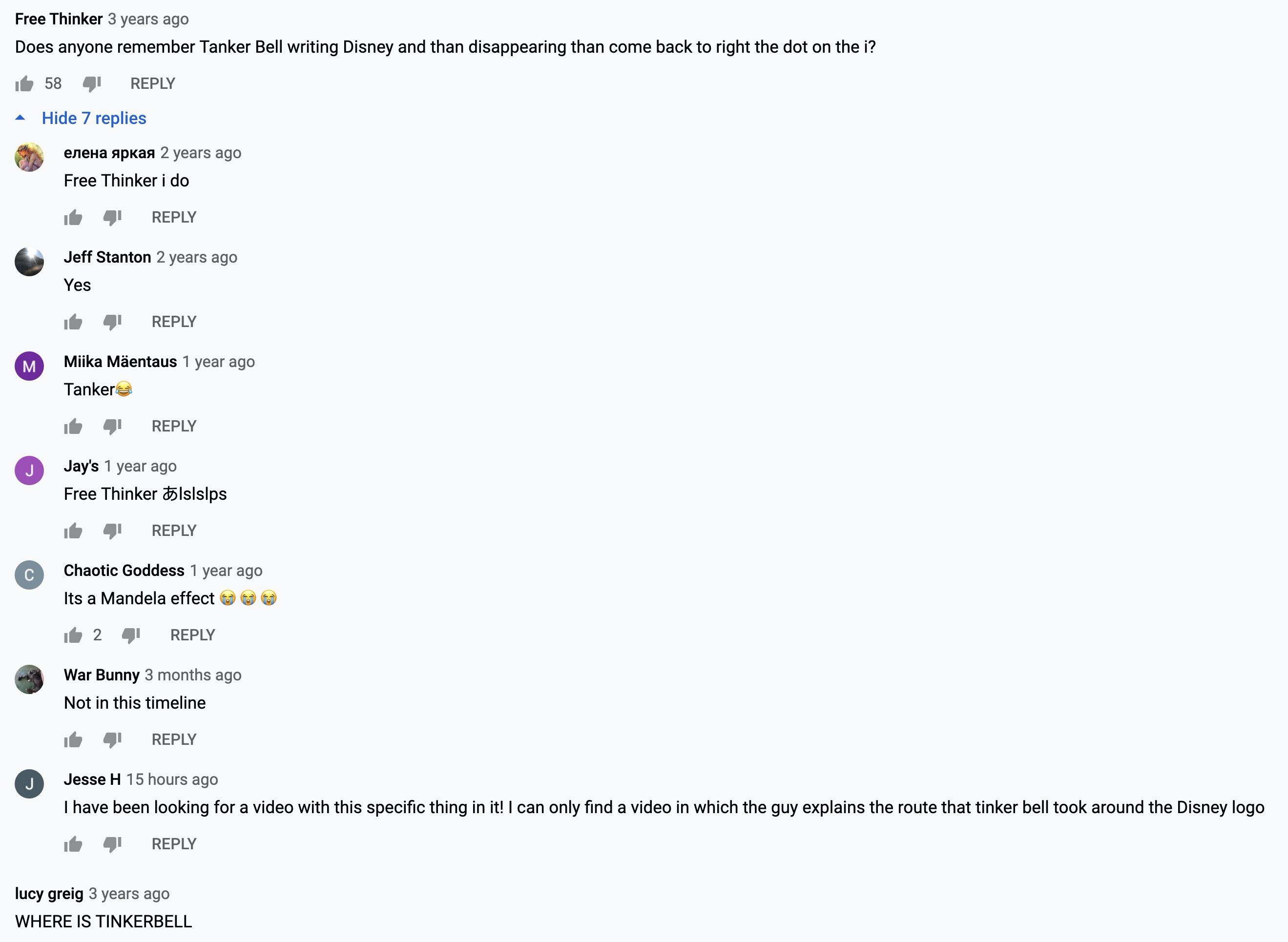 Perhaps the closest animation to any of the descriptions was in the video labeled as being from 1997, but in it, Tinkerbell does not dot the “i” in Disney: 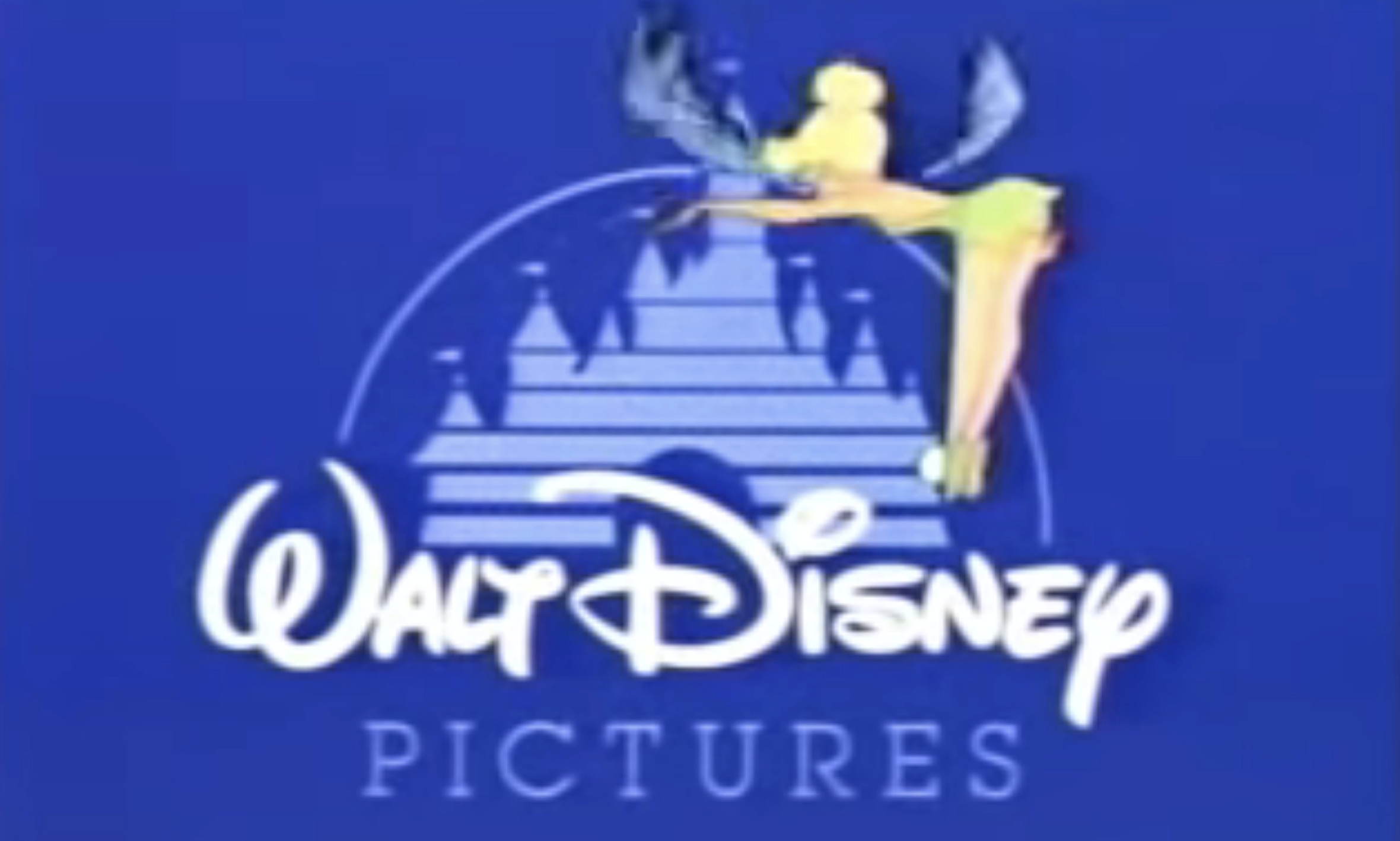 That version was frequently described as the closest to descriptions provided by viewers, but commenters again insisted the animation was not what they remembered: 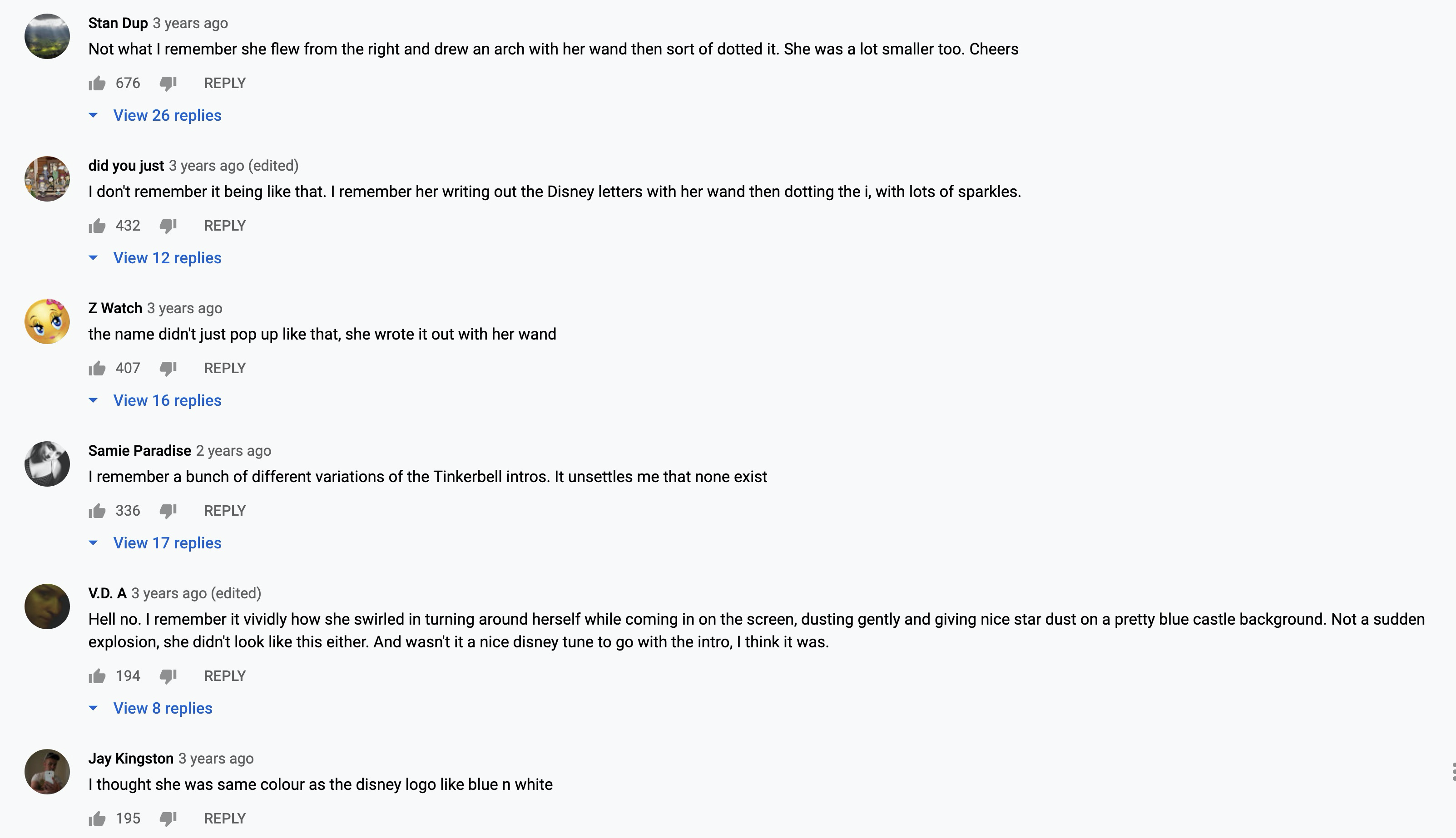 A February 2017 entry on alternatememories.com aimed to streamline the purported discrepancy, placing the widely-remembered logo in the 1990s:

The introduction to the Disney movies featured a slick animation of fireworks around the iconic castle, all accompanied by the majestic sweeping musical score. Many remember Tinkerbell, the little magical fairy named after the sound of her voice, flying round it and waving her wand at the end, conjuring up the famous Disney logo.

Apparently, however, this never happened, and it’s a shooting star which is seen in the animation today. Those who remember Tinkerbell with her wand this way could be experiencing the Mass Memory Discrepancy Effect, because there is no evidence of it ever happening.

A March 2018 tweet included an image of the blue logo often described in discussions about the logo animation, but without Tinkerbell:

Guys. I need you to be 100% honest with me rn.
In the blue Disney intro with the castle (the one before all those old disney movies) was Tinkerbell flying across the screen?? pic.twitter.com/eFSBl18X5c

seen a tik tok saying how the Disney intro where Tinkerbell comes out & dusts the castle into existence doesnt actually exist apparently & they were freaking out about it being the Mandela effect, I spent 20 mins searching for the intro & CANT FUCKING FIND IT ANYWHERE

Double Mandela Effect: Tinkerbell /Tinker Bell Tinkerbell is now Tinker Bell. The other Mandela Effect about her is that she is missing in a couple Disney Intros. One Intro is where she writes “Walt Disney” with her wand (which history now never records her ever doing) The second intro is where she would ﬂy in and tap the Disney Castle with her wand (in the picture below) but history never records her doing that either.

And an August 31 2020 YouTube video proposed that the animation it included was the cause of the Tinkerbell discrepancy. However, that logo was not the “blue” version often described by social media users: 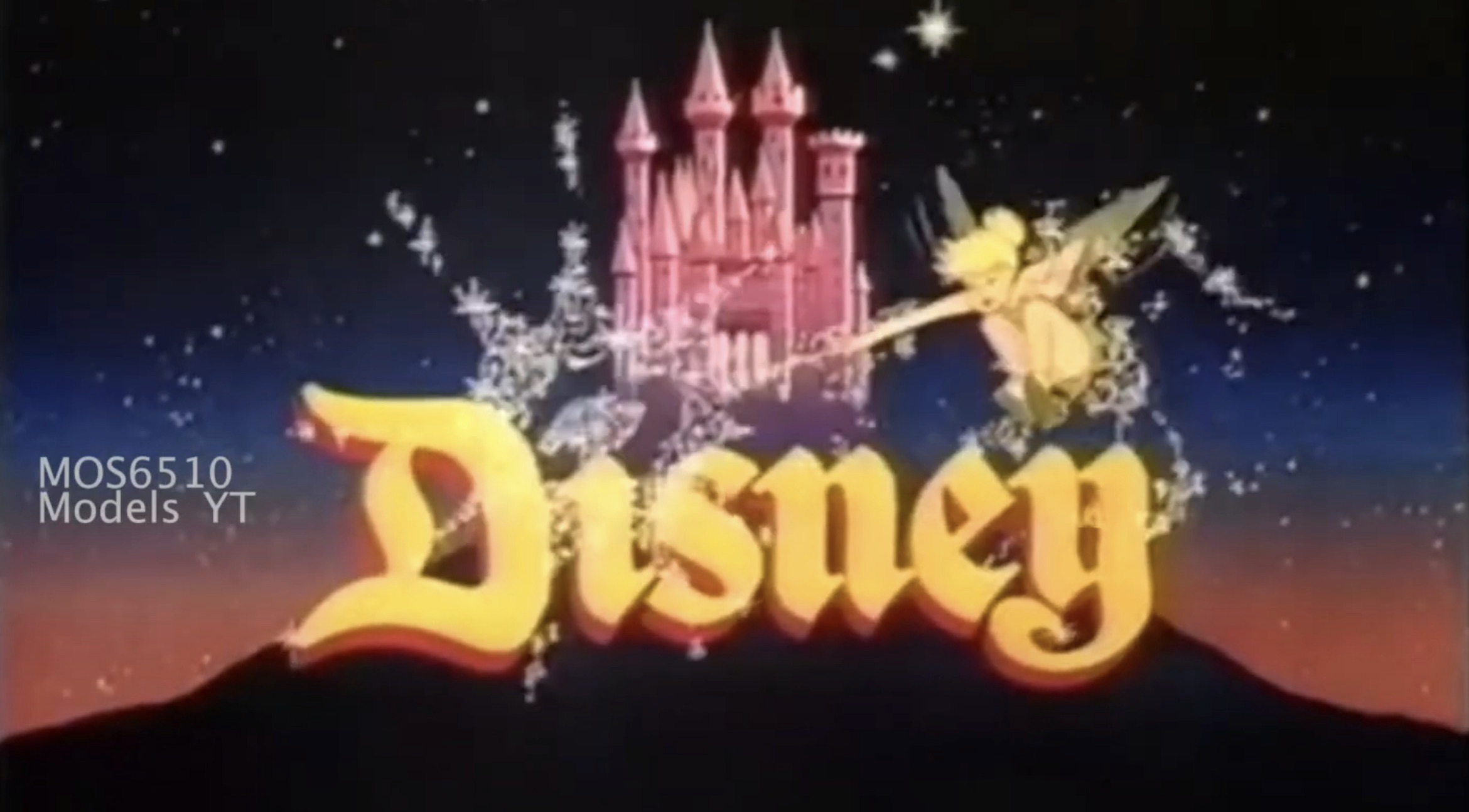 A separate video from 2017 collected several introductions, but none matched the one described by users. A description read:

Compilation of the clips that have likely lead people to perceive a “Mandela Effect” for Tinkerbell’s Disney intros. LOTS of people (myself included!) remember Tinkerbell writing the logo, and even dotting the “i” in Disney. But are we just combining the different scenes in our heads? The Mandela Effect could truly exist, but this one just seems like a mixed bag of childhood memories. What do you think?

Top comments on that clip indicated the footage spliced together was old, and users reiterated their approximate age and recollection:

“I’ve never seen those old clips. I’m too young, but I remember her flying around and dotting the i on the blue intro.”

“I never seen thos old black and white intros. In the 90s as a kind I remember the intro with the blue background and the castle logo. Tinkerbell flew around and tapped on the castle. Its in my minds memories at this moment.”

A viral Facebook post in late August 2020 revived interest in “Tinkerbell dotting the ‘i,'” a widely-debated memory of a reasonably specific Disney introduction segment. In it, Tinkerbell purportedly flies around or writes the “Disney” logo, dotting the “i” in “Disney” with her wand. In some iterations, Tinkerbell purportedly “taps” her wand several times to make the wand “work.” Many viewers proposed different versions of Disney introductions. We were unable to locate any video that indicated the “blue logo Tinkerbell” ever “dotted the ‘i'” in Disney, as users seemed to recall “vividly.”