John Ashe Dies Days Before Testifying Against Hillary Clinton – Truth! & Fiction!
Summary of eRumor:
John Ashe, a former diplomat and president of the United Nations General Assembly from Antigua, died in June 2016, days before he was to testify in a corruption case against a Hillary Clinton donor.
The Truth:
It’s true that John Ashe died unexpectedly in the middle of a corruption case, and that an alleged former Clinton donor was involved, but other details about Ashe and the charges against him are false or unproven.
First, neither Hillary Clinton nor the Clinton Foundation were involved in the corruption case against John Ashe. Second, the so-called donor that Ashe was allegedly set to testify against, Ng Lap Seng, hasn’t had traceable ties to the Clintons since the mid 199os. Third, there’s no proof that Ashe died just before he was scheduled to testify against the so-called Clinton donor.
John Ashe, the former president of the United Nations General Assembly, was indicted in a bribery scheme in October 2015 for allegedly accepting more than $1 million from people in China for real estate deals, according to a criminal complaint.
The complaint alleges that John Ashe took illegal payments from Ng Lap Seng, a Chinese real estate developer from Macau, and used his “official position to obtain for NG potentially lucrative investments in Antigua.” Again, the Clintons were not involved in the case.
The 61-year-old John Ashe was charged with engaging in a pattern of corruption with six others that netted more than $1 million in bribes from Seng. Ashe allegedly used the illegal payments to bankroll a lavish lifestyle, including $59,000 in hand-tailored suits from Hong Kong, multiple $54,000 Rolex watches and $69,000 golf club membership.
John Ashe’s family released a statement that said he had collapsed several times at his home in Dobbs Ferry, Westchester, New York, before his death on June 22. Ashe had been under the care of a neurologist and had been awaiting the results of an MRI at the time of this death, the family said:

Ambassador Ashe and his family had been dealing with an inordinate level of stress over the past eight months, relating to the unproven allegations leveled against him and the home detention imposed on him by court proceedings.

Sadly, now his legal efforts to clear his name have been tragically cut short. Ambassador Ashe’s wife was devastated to find him collapsed at home on June 22, 2016. His wife and younger son had previously found him collapsed and unresponsive first on April 25th, and again on April 28th. Both times, he was taken by ambulance to the hospital and received emergency medical treatment. On June 22nd, it appears that a third episode of collapse, tragically, led to his untimely death.

At the time of his passing, he was under the care of a neurologist who was evaluating the cause of the earlier episodes. He was awaiting the results of an MRI, and was scheduled for an Electroencephalogram (EEG) for sleep deprivation on June 25th.

Following John Ashe’s death, claims that he was scheduled to testify against Hillary Clinton or Ng Lap Seng quickly went viral — but they don’t check out. Prosecutors in the case have said that he was scheduled for pre-trial activity, but the trial was not set to begin days after his death, and he was not scheduled to testify against Seng at the time of his death.
As for Ng Lap Seng, who was arrested in September for allegedly lying about why he brought $4.5 million in cash into the country, it’s true that a 1998 Senate committee report tied him to the Democratic Party’s fund raising efforts — and to Bill Clinton in particular. The report states that Seng laundered money through a Little Rock restaurateur who donated thousands to the Democratic Party:

Former Little Rock, Arkansas, restaurateur Yah Lin “Charlie” Trie and Macau-based businessman Ng Lap Seng collaborated in a scheme to contribute hundreds of thousands of dollars in foreign funds to the DNC. Ng wired over one million dollars from accounts he maintains in Macau and Hong Kong to accounts maintained by or accessible to Trie in Little Rock and Washington, D.C. Although Trie held himself out as an international trader (and, in fact, actively sought to develop an international trading business he called Daihatsu International Trading Corporation), he was never successful. Trie’s bank records and tax returns reveal that he received little or no income from sources other than Ng Lap Seng. Although he failed to establish a successful, income-generating international trading business, Trie, his wife and his businesses managed to contribute a total of $220,000 to the DNC between 1994 and 1996. Trie and Ng also reimbursed the contributions made by a number of other DNC contributors who were recruited by Trie in order to further disguise the ultimate source of the contributions. As Trie earned little money through his own business activities, the Committee concludes that Trie used the foreign-source funds wired from Ng to make his (and his wife’s and businesses’) DNC contributions and to reimburse the conduit contributors. The Justice Department indicted Trie for these illegal activities on January 28, 1998.

Bill Clinton was named as “among the politicians who frequented Fu Lin and became friends with Trie” while he was the governor of Arkansas.
The report concluded that, “Trie’s contributions purchased access for himself and Ng to the highest levels of our government.”
ABC News also reported in 1997 that Seng had made six trips to the White House and frequented events sponsored by the Democratic National Committee. Here’s a photo of one of those visits: 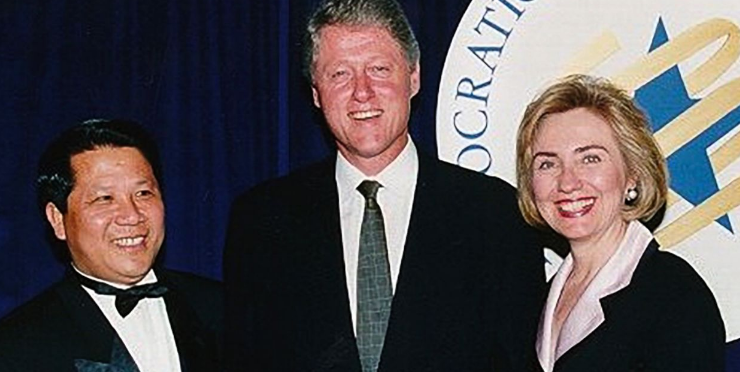 So, in conclusion, claims that John Ashe died days before he was scheduled to testify against Clinton donor Ng Lap Seng are both true and false. Ashe died unexpectedly during pre-trial activity, but there’s no indication that he was killed. There’s also no indication that he was scheduled to testify against Seng.
This isn’t the first time we’ve investigated conspiracies about Clinton “friends” dying under suspicious circumstances, either. Click here for our related investigations.