On November 15 2021, a screenshot of a purported headline reading “Judge Rules That Britney Spears Is Allowed to Commit Crimes” circulated on Facebook, often without any context: 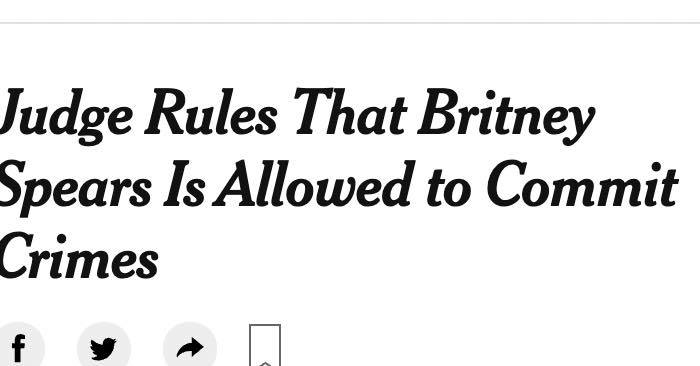 Based on visual cues, the headline appeared to originate with the New York Times. It circulated against a backdrop of news about the “Free Britney” movement and stories that a judge had finally ended Spears’ lengthy conservatorship

Honestly good for her pic.twitter.com/0NwWeCJlIg

“a judge ruling that a celebrity is allowed to commit crimes is not something i expected (or, tbh really even wanted) to see on my tl, but as far as i can tell she was restricted to a ridiculous level by the conservatorship so i reckon let her have this”

“my girl deserve the world. they took so many years from her life. she is human ♥”

A search for earlier iterations turned up a message board thread, “Article: ‘Judge Rules That Britney Spears Is Allowed to Commit Crimes.'” In the original poster’s post, a “hidden content” section read:

A Google search for “Judge Rules That Britney Spears Is Allowed to Commit Crimes” in fact only turned up the above-linked forum thread. Moving the quotes to surround only “Judge Rules” and “Britney Spears” returned what was likely the template for the tweet’s headline:

A tweet featuring what looked like a New York Times headline reading “Judge Rules That Britney Spears is Allowed to Commit Crimes” spread virally on and off Twitter. Context for the meme was a recent ruling ending Spears’ years-long conservatorship after a lengthy, often very public legal battle, and the tweet’s “Honestly good for her” reflected widespread public sentiment around the decision. That humorous riff on a real headline was later decoupled from its source, spreading on Facebook with even less context.