On February 6 2019, the Facebook page “Children of the Night” reposted a popular meme purportedly showing an amusing scene: actor Keanu Reeves fleeing paparazzi after stealing a camera from a photographer: 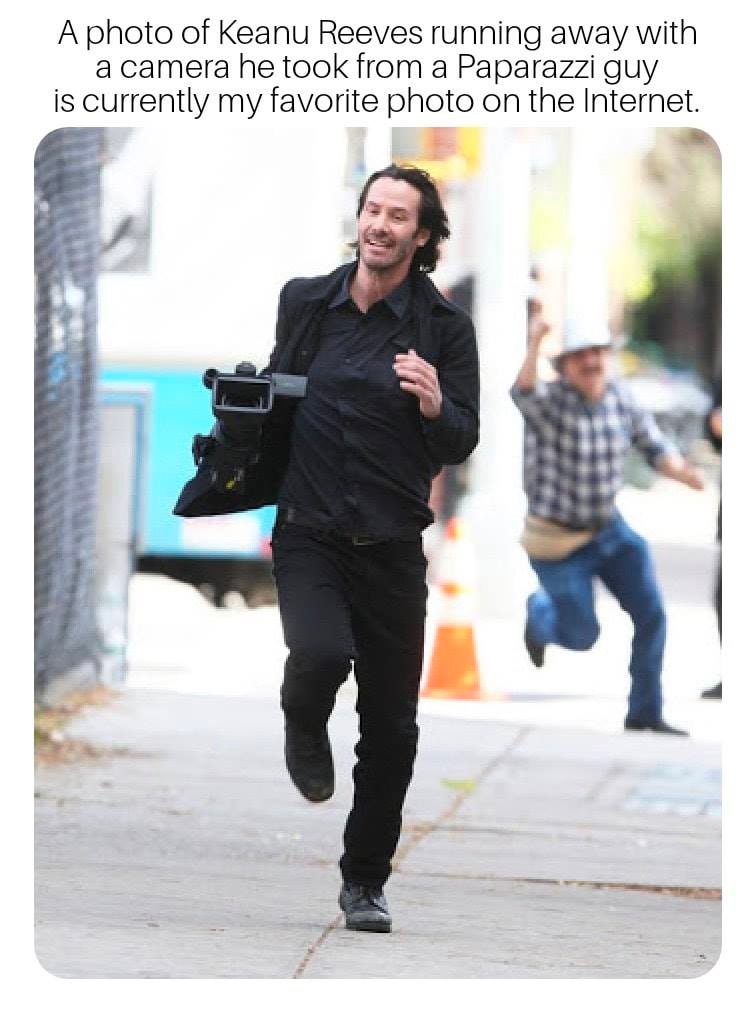 A photo of Keanu Reeves running away with a camera he took from a Paparazzi guy is currently my favorite photo on the internet.

Neither the image nor its backstory were new in February 2019. In February 2018 the same claim was shared to Reddit’s r/keanubeingawesome, and it appeared on Twitter long before that, back in August 2017. Commenters across the web expressed their fondness for Reeves, but attributed the stills to the movie Generation Um… (the trailer can be seen here; part of the camera scene can be viewed starting at roughly :42), and in it, Reeves can clearly be seen stealing a camera — in character, for the film.

However, the actor was sued by a paparazzo in the past, possibly driving the rumor (with another rumor):

Alison Silva buckled under questioning by Reeves’ defense attorney and acknowledged he was beaten by fellow photographers while shooting photos of Britney Spears earlier this year. That assault came roughly a year after the incident in which Silva claims Reeves hit him with a car and left him unable to work.

Silva acknowledged the beating left him unconscious and forced him to delay a second surgery to repair damage in his left wrist he attributes to the run-in with Reeves.

The 28-year-old Brazilian-born paparazzo spent his second day testifying about the incident and his subsequent treatment. He is suing the star of “The Matrix” and “Speed,” claiming he hit him with his Porsche in March 2007 while Silva was trying to shoot photos of the actor behind the wheel.

Nevertheless, the “Keanu stealing a camera” meme juxtaposes film stills with a humorous interpretation to create funny and shareable (yet totally untrue) social media posts. Accordingly, individual shares of the meme and related claims tended to rack up thousands of shares in just a few hours.