Photo depicts King George VI "having fun" on a carnival or fair slide (known as "helter skelter" in the UK). 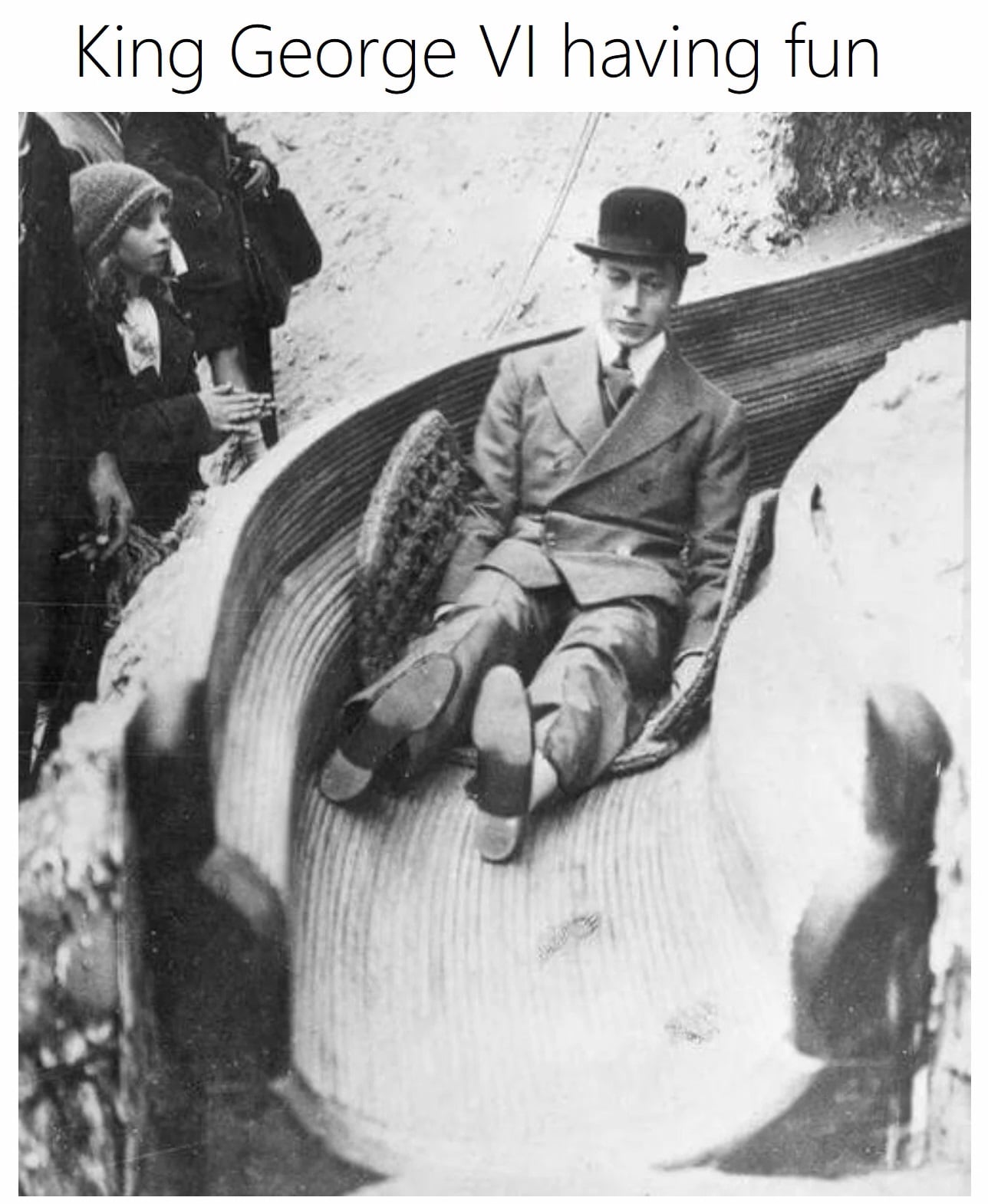 Although the image was popular and generated engagement, no additional information was included alongside it. A reverse image search indicated that the image was not new to the internet, and it was first crawled in 2011:

As is often the case, however, the first two links (which looked credible, from Life magazine and the New Yorker) were not functional, and attempts to locate the original context were not fruitful. Reverse image search also revealed the photo was shared to Imgur and Reddit in 2013 to r/HistoryPorn (also a broken link), to Imgur and r/photoshopbattles in April 2014, again to r/HistoryPorn in August 2015, and to r/TheWayWeWere in 2019:

On Reddit, the image was sufficiently prolific to warrant an entry on the separate site KarmaDecay.com, an effort inspired by a comment about reposts:

Q: Why the name “Karma Decay”?

A: Firstly, I thought the name just sounded cool. I got it from this comment on Reddit.

Secondly, the name comes from the following observation:

The potential karma for any image decays with each subsequent post.

As an image is posted more and more times on Reddit, the chance that it will get up-votes is reduced; less votes means less karma. This is based on averages; exceptions occur.

Outside of Reddit and its sibling Imgur, the image was shared by a Flickr user in 2014, again without a source. A description read:

Prince Albert, Duke of York, (the future King George VI), on the helter-skelter at the Wembley Exhibition, London 1925

Prince Albert (1895-1952), was not expected to inherit the throne. He served in the Royal Navy and Royal Air Force during the First World War, and after it took on the usual round of public engagements. He married Lady Elizabeth Bowes-Lyon in 1923 and they had two daughters, Elizabeth and Margaret.

Prince Albert’s elder brother ascended the throne as Edward VIII upon the death of their father in 1936. However, later that year Edward revealed his desire to marry the divorced American socialite Wallis Simpson and in December 1936 he abdicated.

Because of his stammer, Albert dreaded public speaking, so he began to see Lionel Logue, an Australian-born speech therapist. The Duke and Logue practised breathing exercises, and the Duchess of York rehearsed with him patiently. This helped him greatly.

The king was a heavy smoker and along with other ailments, such as arteriosclerosis, he developed lung cancer. On 6 February 1952, he died from a coronary thrombosis in his sleep at the age of 56.

The Duke of York, later King George VI of Great Britain on a slide at the Wembley exhibition, 1925. pic.twitter.com/8ar8kfdl4i

Eventually, we located a Getty Images entry for the photograph, with information about its provenance (an exhibition which took place between April 1924 and October 1925):

1925: The Duke of York, later King George VI of Great Britain on a slide at the Wembley exhibition. (Photo by Keystone/Getty Images)

An August 2021 Classical Art Memes post labeled “King George VI having fun” served as a “history meme” from at least 2013 onward, but the image was rarely accompanied by anything other than a verbal description. Getty Images included the photograph in its archives, indicating it depicted the “Duke of York, later King George VI of Great Britain on a slide at the Wembley exhibition” in 1925. Although intermittent labeling often dropped the “later King George VI” portion, the image was overall accurately described and correctly dated.