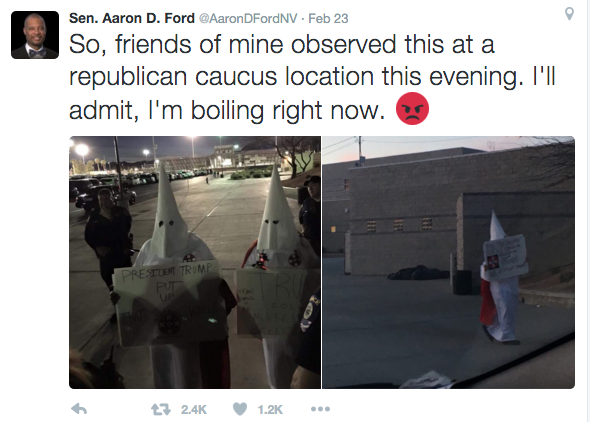 The images sparked an immediate backlash, but online defenders of Donald Trump quickly pointed out that African-Americans appeared to be wearing the robes, not actual KKK members. Photos like this one have been used to argue that Trump protestors — not Trump supporters — wore the robes outside a Trump rally: 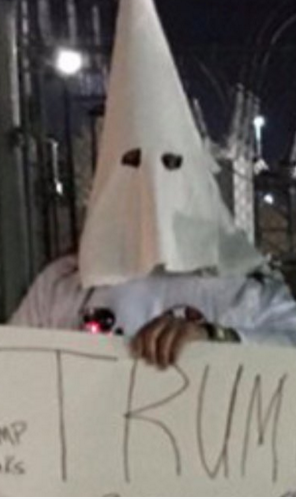 And one of the photos shows a so-called KKK member holding a sign that says, “The New England Police Benevolent Association supports Trump! We support them!” A spokesperson for the group quickly released a statement saying that the protestors were attempting to smear the New England Benevolent Association, and that none of its members were associated with the KKK, The Wrap reports:

“I can assure you of one thing: we don’t have any members that are members of the Ku Klux Klan,” the group’s executive director, Jerry Flynn, told TheWrap on Monday.

Tony Archinski, the NEPBA’s director of administration, told TheWrap on Wednesday that the group was as baffled by the protest as everyone else.

“We had nothing to do with that. Like everybody else we saw it on the Internet,” Archinski said. “I’m thinking that somebody just picked up on that and made themselves a sign.”

Asked if the group had been the victim of trickery by people trying to make it look bad, he replied: “What do you think?”

Archinski said he believed the group, which represents law enforcement officers across New England, was targeted because of its endorsement of Trump in December.

For his part, Nevada State Sen. Aaron Ford said the race of those wearing the KKK robes doesn’t matter to him, because he said, “anyone engaging in what was observed yesterday deserves to be exposed, and that was the exact purpose of my post.” Ford continued:

The fact that anyone — whether an actual member of the KKK or one pretending to be one to make a point — found it appropriate to wear white sheets and hoods yesterday should astound all but the purest of racists in our society.

To be sure, everyone has a First Amendment right to freedom of speech. But again, similar to the cross-burning analysis Justice Thomas gave in Black, KKK regalia such as that present at one of yesterday’s caucus locations “subject its targets, and, sometimes, an unintended audience … to extreme emotional distress, and is virtually never viewed merely as ‘unwanted communication,’ but rather, as a physical threat[.]” I have heard about some caucusing at that site who, indeed, were subjected that those exact sentiments.