Between July 30 and August 1 2021, a purported photograph from the Lollapalooza 2021 music festival in Chicago went viral, hitting social media users a little differently against the backdrop of an ongoing pandemic.

Perhaps the most prominent version was shared to Reddit’s r/pics on August 1 2021, showing a tightly packed and apparently maskless crowd:

Before the year 2020, that same image might have spread virally simply due to the impressive crowd size. As of the summer of 2021, however, the concept of “viral” images served as something of a double entendre on Facebook and Twitter:

Lollapalooza looks like the biggest super-spreader event of 2021 pic.twitter.com/UTcZ3JE6vo

A popular Facebook iteration was shared by the page Rave Humor, alongside a related meme in the comments: 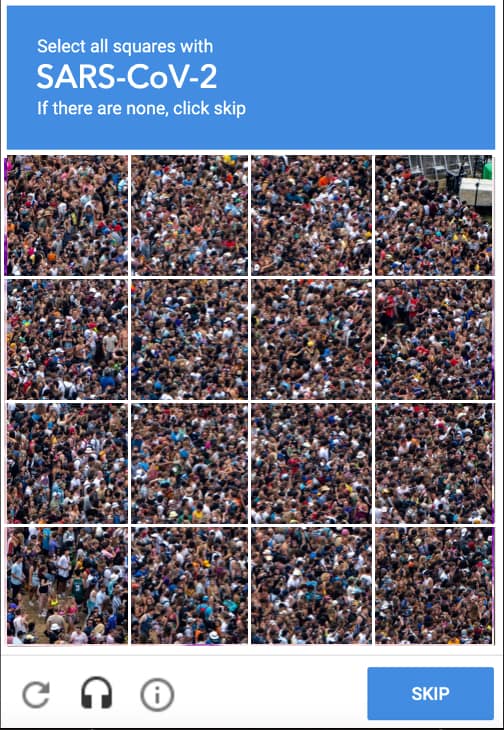 Another version was shared to Reddit’s r/photoshopbattlesess:

A reverse image search returned no results on TinEye, suggesting that the image was either new or a sharp still from a video clip. Several versions were returned on Google, none earlier than July 30 2021.

One of the results was from Reddit’s r/chicago, linking to the r/pics thread. That variation included a credit to a photographer named Colin Hinkle:

A quick search for Hinkle led to that particular account’s Twitter timeline (@hinklecolin), and its appearance there late on July 30 2021:

Hinkle published other images from Lollapalooza 2021 in Chicago, but none of those tweets were as popular as this one:

In the replies to the viral tweet’s image, commenters offered commentary which included a meme satirizing Lollapalooza’s promotional materials:

A photograph purportedly showing an alarmingly large and closely packed crowd at Lollapalooza 2021 in Chicago went viral, leading to ongoing discussions on social media about the unease the image prompted in the pandemic-roiled world of 2021. Images involving a relatively nondescript crowd were not uncommonly mislabeled or featured out of context — something many readers and viewers likely hoped was the case here. However, the image was shared late on the night of July 30 2021 by attendee Colin Hinkle.

Hinkle continued photographing and sharing images of the sizeable Lollapalooza crowd in Chicago, images that were supported by videos taken from multiple angles by various attendees and news outlets.