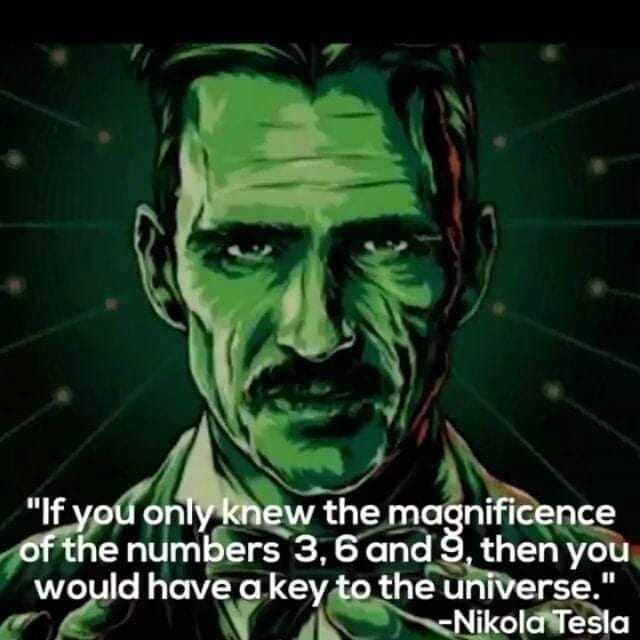 Tesla’s “3-6-9” quote varied across memes and sources, but many were similar to the above meme from August 1 2021:

“If you only knew the magnificence of the numbers 3,6, and 9, then you would have a key to the universe.” – Nikola Tesla

A July 28 2021 post from a Facebook metaphysics page was similar in composition, as was a 2016 post with less engagement. Over on TikTok, the tags #369 and #369method boasted hundreds of millions of views.

Unlike Facebook, TikTok’s videos were a bit lengthier and exposited about Nikola Tesla’s purported attachment to the numbers 369, 3, 6, and 9. One video fitting that description involved claims about how 3, 6, and 9 created different patterns when “doubled,” and TikTok posts tended to visually employ quote memes as a citation of sorts:

The second embedded video contained a claim that Tesla believed that “three represents energy, six represents frequency, and nine represents vibration” in Tesla’s purported view. The claim showed up on Reddit’s r/spirituality in December 2020, but in 2014 a member of r/skeptic referenced it, seeking validation for the claims:

Nikola Tesla and the magnificence of 3 6 9 / hoax or not? from skeptic

Goodreads (often an early adopter of misattributed quotes) began crediting the quote to Tesla as early as June 2013 (the first time the quote was “liked” by a user), and it was referenced in a Quora submission in October 2013. One of the earliest versions we found appeared in the comments of an unrelated Flickr post from 2006, with the comment added in around 2010 (possibly originating with a self-styled “Biblical prophet” sharing the claim to that site in comments sections):

“If you only knew the magnificence of the 3, 6 and 9, then you would have a key to the universe.”
— Nikola Tesla

Restricting Google searches to results published prior to 2016 and 2012 returned a handful of results for the “quote,” primarily incorrectly dated Pinterest content. On July 6 2011, a user on physicsforums.com published a thread, “Why was Tesla obsessed with the number 3?” They asked about Tesla and the number three, but not six or nine:

Among the replies was a link to a blog post from December 2009, citing Tesla and the quote with respect to a time management strategy (not manifestation, metaphysics, or mysticism):

Nikola Tesla said that, “If you only knew the magnificence of the 3, 6 and 9, then you would have a key to the universe.”

I am about to share with you a simple time management strategy. One that has had a tremendous impact on my efficiency since the day I first innovated & implemented it. This is not the key to the universe and not every day goes perfect, but more often than not – at the end of every day – you will feel satisfied with the work accomplished. That every client, project, and task is getting just the right amount of time. And be excited to begin the next day.

The strategy achieves its harmony using Tesla’s favorite numbers: three, six and nine. Creating ample time for pure, uninterrupted, focused attention (on whatever it is you want to progress). Simplifying the process of scheduling your future (so its easy to plan ahead). And relaxing your brain (to maintain your peak performance).

It’s easy to see the significance of Tesla’s favorite numbers in the context of time. Look at the face of any clock. Our day is blatantly divided into 3 hour quadrants. Represented by the predominant 3, 6, 9 and 12 ( 1 + 2 = 3).

Tesla’s extensive Wikiquote entry makes no mention of the quote whatsoever, but does list an extremely similar quote under its “Disputed” section. The citation for the disputed quote was secondhand — and it leads back to a sales site:

“If you want to find the secrets of the universe, think in terms of energy, frequency and vibration.”

First attibution is to Ralph Bergstresser who claims to have heard this from Tesla in a conversation “following an experience with the Maharaja’s son”[.]

The “Talk” section of Tesla’s Wikiquote page contained a mention of the “3, 6, and 9” quote, under “unsourced,” in a context that suggested an evolution from “energy, frequency, and vibration” to “3, 6, and 9”:

In late 2020 and early 2021, TikTok and Facebook were awash in memes claiming Nikola Tesla said that anyone who “knew the magnificence of 3, 6 and 9 … would have a key to the universe.” That quote appeared to be a variation of an earlier and shakily attributed to Tesla quote: “If you want to find the secrets of the universe, think in terms of energy, frequency and vibration”; TikTok videos asserted that the numbers 3, 6, and 9 referenced “energy, frequency, and vibration.” The earliest source traced by Wikiquote users was a sales page for pseudoscientific items, and the earliest iterations appeared amid unhinged comments on Flickr posts. Despite both quotes’ prominence on social media, neither has been credibly attributed to Nikola Tesla.