An image shows House Speaker Nancy Pelosi in an inebriated state during the day, with someone either "helping her walk" or "escorting" her out of a restaurant.

On October 10 2020, a Facebook user shared the following image of Nancy Pelosi captioned “Looks like Crazy Nancy had a liquid lunch”:

Although the post provided no context or source for the image, it racked up thousands of shares. In the photograph, Pelosi is seen apparently exiting an unspecified establishment, trailed by a man in a suit and a woman reaching out to hold Pelosi’s wrist.

An initial Google search indicated that the image was not taken in October 2020; an absence of masks or face coverings implied as much. On July 3 2020, a similar post was crawled by meme aggregator iFunny: 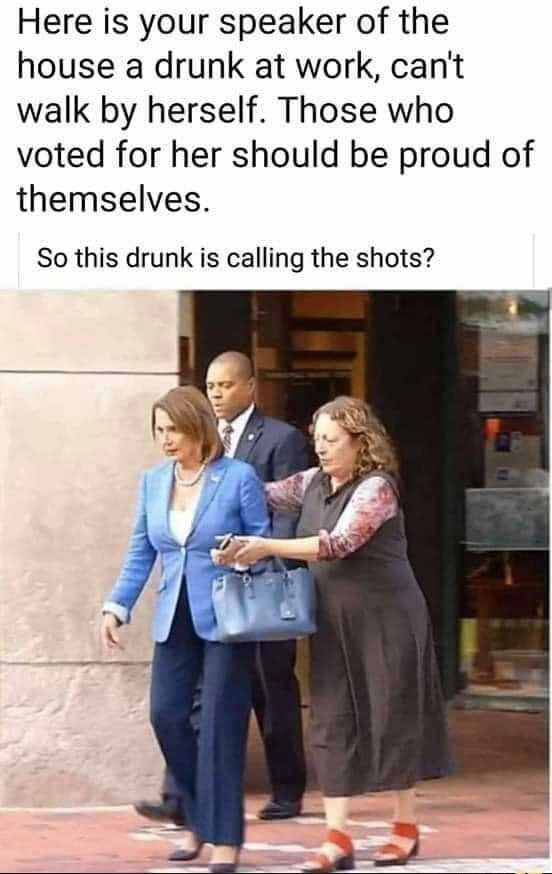 It was difficult to discern the original source of that July 3 2020 post, but it carried two separate captions. They read:

Here is your spaker of the house a drunk at work, can’t walk by herself. Those who voted for her should be proud of themselves.

So this drunk is calling the shots?

All three comments implied that Pelosi was intoxicated “at work,” although the image itself bore no indicators that Pelosi had a) been drinking or b) was “at work” in any capacity. Reverse image search returned even older iterations of the image; one was shared on March 4 2020, and captioned:

That Instagram user (@ralphie_boy_10) was no longer active as of October 12 2020, but archived screenshots indicated they originally captioned the image:

On January 31 2020, a Facebook user shared the image, again with a similar caption:

Nanshy Pelosi seen leaving the Bar after hearing GAME OVER, liberals lost in the Senate. https://www.foxnews.com/politics/murkowski-comes-out-against-impeachment-witnesses-putting-trump-on-path-to-acquittal

A linked Fox News item did not mention Pelosi’s name. A Google Image Search was not helpful, providing the suggested caption “adrenochrome clinic” for the image (which was also inaccurate):

On February 29 2020, PolitiFact examined variations of the image on Facebook, tracing the image to a 2016 blog post headlined, “Nancy Pelosi Shops in Hartford” (not “Nancy Pelosi Drunk in Hartford.”) It provided additional context for the image, namely that Pelosi was “escorted to a waiting SUV” by shop owner Jody Morneault — and that the pair hugged before Pelosi was “whisked away”:

One of the most powerful women in Washington was in Hartford this Friday and spent about an hour or so shopping at one of Connecticut’s oldest stores. Stackpole, Moore and Tryon has had its share of prominent shoppers ever since it opened in 1909, including House Minority Leader and former House Speaker Nancy Pelosi.

Pelosi was greeted by store owner Jody Morneault and later escorted to a waiting SUV by Morneault and a government security detail. The two hugged before Pelosi was whisked away. The California Democrat will later attend a fundraiser at the home of Congressman John Larson.

In short, an October 2020 claim about Pelosi captioned “Looks like Crazy Nancy had a liquid lunch” was stolen in early 2020 from a 2016 blog post about the Speaker’s visit to Hartford to shop and then repurposed as political disinformation — which was not cleared up by a Google description of the image, which pandered to yet another conspiracy theory. Pelosi was not “escorted out” of a store or helped to a vehicle; Morneault and Pelosi “hugged” before she was “whisked away” in an SUV.