In April 2021, a billboard in Florida read "Matt Gaetz wants to date your child."

On April 9 2021, an Imgur post made a titular claim that a Florida billboard stated “Matt Gaetz wants to date your child” — but that post, which was quite popular, did not include a photograph of the purported sign: 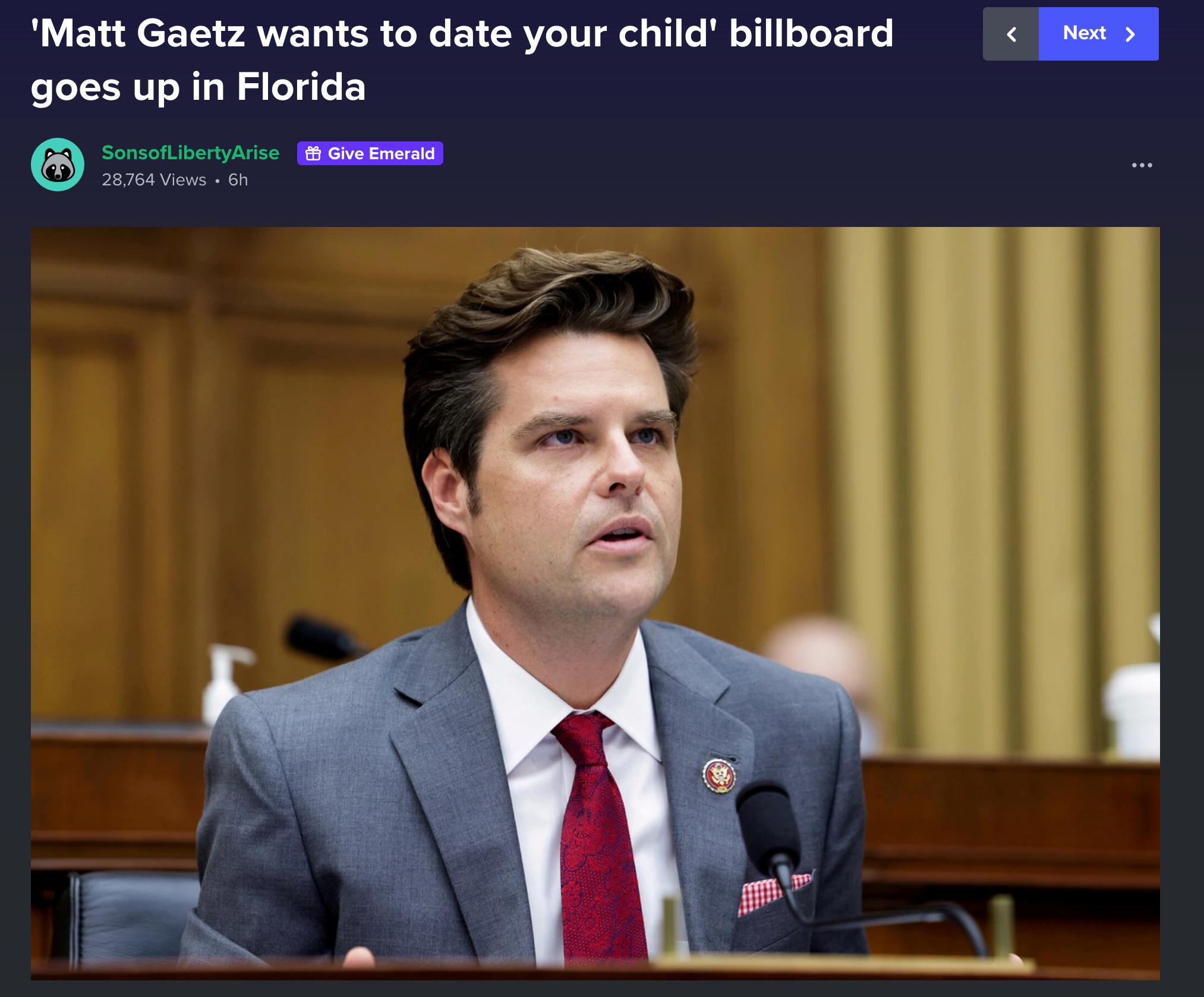 Instead, the submitter posted a descriptive title alongside an image of Gaetz, who is a Congressman in Florida’s first district. The post involved a little bit of context, which we will unpack below.

Quite a lot, primarily regarding allegations about his involvement with underage girls.

What About the Billboard?

Over on Twitter (where “House Ethics Committee” trended in relation to discourse about Gaetz), a popular April 8 2021 tweet included a photograph of the purported billboard:

In the tweet, the user transcribed the text on the billboard, but didn’t provide a location for the photograph. A separate tweet displayed the billboard in better detail:

Matt Gaetz billboard gets right to the point pic.twitter.com/4D0pjBSDVt

To the left of a black and white image of Rep. Gaetz, text read:

MATT GAETZ WANTS TO “DATE” YOUR CHILD.
Paid for by MadDogPAC.com

Who Put It Up?

An April 6 2021 tweet by Claude Taylor (@TrueFactsStated) announced the existence of the billboard, included the same image as the tweet above, and requested that Twitter users alert reporters to its presence:

Our billboard is up. Please share with reporters on the @mattgaetz beat. We are https://t.co/g2orQKVoYx pic.twitter.com/oblF4j2Tlm

A few hours previously, Taylor had tweeted a mockup of the billboard, and on April 9 2021, Taylor shared video of it:

It’s going up! Photos soon! Help fund this billboard in Gaetz’ backyard. Chip in or shop at https://t.co/g2orQKVoYx pic.twitter.com/rhIIutY5zr

Getting enormous reactions to the billboard. Yep-including death threats. Should we do a second Gaetz billboard? Specific message? Please support or send your threats to https://t.co/g2orQKVoYx pic.twitter.com/hApMlwdV0P

Who is Claude Taylor, and What is Mad Dog PAC?

Claude Taylor is verified on Twitter, but we were unable to locate any sort of biographical information for him, such as a Wikipedia page.

A search for detail of the sort led to a rather odd Paste Magazine item from May 11 2017, headlined, “I Screwed Up Trusting Claude Taylor.” That article appeared to be a complete edit from what had originally existed at its address, and the original page did not appear to be archived on sites like Archive.is or the Wayback Machine.

We all make mistakes, and this [article in its original form] was one of mine. I quickly produced a story about Claude Taylor, who was tweeting live updates about an FBI raid of a Republican consulting firm. His tweets came about thirty minutes before a local investigative reporter released the same set of information, and the article was simply placing them side by side and wondering if Taylor had connections in the know.

A few days after this story went up, Taylor and Louise Mensch—another crackpot conspiracy theorist—published a “report” stating that “Separate sources with links to the intelligence and justice communities have stated that a sealed indictment has been granted against Donald Trump.”

Citing inconsistencies the author observed after publishing the original article, he added:

[As Mensch and Taylor’s claims fell apart] I knew this column was a gigantic mistake, but given that I had only been writing professionally full-time for less than a year, I was uncertain of what to do. I wanted to fire this column into the sun and purge it from the internet, but that would be unethical, and I don’t want to set that kind of tone for my career. So instead, I have deleted the entire column as it is based on Taylor’s credibility (of which he has none), changed the title, and put this mea culpa in place. I will leave you with this expose of Claude Taylor’s fraudulence that I wish I had done at the time I first wrote this piece.

Taylor’s name also came up alongside Mensch’s name in an August 2017 Guardian piece about how a fake, planted story gained traction among “online writers” — boosted by both Mensch and Taylor:

Explosive allegations about Donald Trump made by online writers with large followings among Trump critics were based on bogus information from a hoaxer who falsely claimed to work in law enforcement.

Claude Taylor tweeted fake details of criminal inquiries into Trump that were invented by a source whose claim to work for the New York attorney general was not checked, according to emails seen by the Guardian. The allegations were endorsed as authentic and retweeted by his co-writer Louise Mensch.

The source’s false tips included an allegation, which has been aggressively circulated by Mensch and Taylor, that Trump’s inactive fashion model agency is under investigation by New York authorities for possible sex trafficking.

The hoaxer, who fed the information to Taylor by email, said she acted out of frustration over the “dissemination of fake news” by Taylor and Mensch. Their false stories about Trump have included a claim that he was already being replaced as president by Senator Orrin Hatch in a process kept secret from the American public.

“Taylor asked no questions to verify my identity, did no vetting whatsoever, sought no confirmation from a second source – but instead asked leading questions to support his various theories, asking me to verify them,” the source said in an email.

As for Mad Dog PAC, the Outdoor Advertising Association of America (OAAA) had this to say in a March 2018 examination of earlier billboards also targeting Gaetz:

Anybody can (and just might) create organic political ads

In late 2017, a corner of social media stewed with interest about whether a new congressman from Florida had been pulled over for impaired driving. If so, how many times?

That curiosity spilled over to a billboard. To pay for the ad, Taylor set out to raise $5,000 online via GoFundMe. When nearly $6,200 arrived in 16 hours, he posted thanks and stopped soliciting. In December, Taylor registered the Mad Dog PAC with the Federal Election Committee (FEC). Four days before Christmas 2017, Mad Dog PAC spent $4,000 for billboard advertising in Florida, according to FEC records.

“We’re learning to fly while we build this plane,” says Taylor, a novice at managing a crowd-funded billboard campaign.

In short, Taylor is a self-styled political operative, and Mad Dog PAC is a fledgling political action committee apparently started when Taylor crowdfunded a billboard to criticize Gaetz in 2017.

Ongoing political turmoil followed Gaetz in April 2021, and included a real billboard in Florida stating “Matt Gaetz wants to ‘date’ your child.” The billboard was the work of a political activist named Claude Taylor and his Mad Dog PAC, and it was put up on or around April 6 2021. Taylor’s name appeared in political reporting in 2017, primarily in connection with his dissemination of false claims in concert with Mensch.