Children's author Maurice Sendak told the story of a young fan who was so enamored of an original illustration that he "saw it, loved it, and ate it."

On September 24 2019, the Facebook page “Untitled Nerd Network” shared the following Maurice Sendak quote, purportedly telling the story of an eager young fan so pleased he received a card from the author that he “ate” it:

Above an image of Sendak and a “wild thing” from Where The Wild Things Are, a quote read:

Once a little boy sent me a charming card with a little drawing on it. I loved it … I sent him a card and I drew a picture of a Wild Thing on it. I wrote, ‘Dear Jim: I loved your card’. Then I got a letter back from his mother and she said ‘Jim loved your card so much he ate it’. That to me was one of the highest compliments I’ve ever received. He didn’t care that it was an original Maurice Sendak drawing or anything. He saw it, he loved it, he ate it.

No comment or citation for the quote appeared alongside that iteration of the meme. Other iterations of the meme came without a photograph of Sendak, but included additional comment from an interviewer: 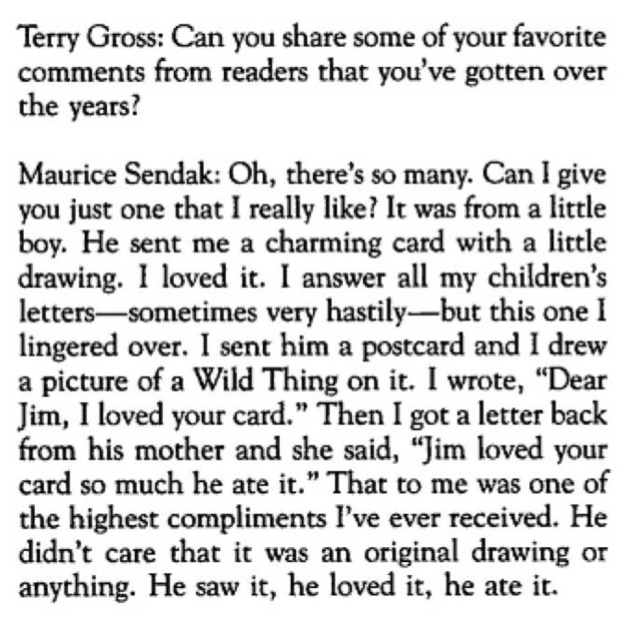 That version of the quote provided the name of an interviewer — Terry Gross — and a question:

Can you share some of your favorite comments you’ve gotten from readers over the years?

In that version, Sendak’s quote begins slightly differently before bleeding into the one seen in the Facebook meme:

Oh, there’s so many. Can I give you just one that I really like? It was from a little boy. He sent me a charming card …

On Reddit, the quote was shared to r/books in January 2018. In 2015, Open Culture published an article about the Sendak quote, which referenced a 2013 tweet from Letters of Note. The above image appeared in the tweet:

Maurice Sendak would've turned 85 today. One of my favourite anecdotes of all time: pic.twitter.com/czfZbvKwFb

The Washington Post included the quote in a blog post in May 2012, which was mostly about Sendak’s death. However, no specific interview or source was cited in that post, either. But a 2013 Open Culture item included video illustrated and published by the New York Times in December 2012, along with information about the possible origin of the quote:

In late September of 2011, Maurice Sendak spoke one last time with Terry Gross for the NPR program Fresh Air. Ostensibly the interview was to promote Sendak’s final book, Bumble-Ardy, but as the conversation progressed it was clear they just wanted to talk.

The beloved children’s writer and illustrator was 83 years old and in declining health. He was feeling the loss of people close to him who had died in recent years. Inevitably, the discussion turned to issues of mortality … By the time it was over there were teary-eyed people in cars all across North America. One listener, Brent Eades, left a message on the NPR Web site: “I happened to be listening to this extraordinary interview while on the early-morning commute from my small Ontario town to Ottawa. I was entirely absorbed in it; and the final couple of minutes left me with tears streaming down my face, which I’m sure nonplussed my fellow commuters.”

NPR published a yearly retrospective at the end of 2011, referencing the Sendak interview, but not the “he saw it, he loved it, he ate it” anecdote in particular. It did provide a date, September 20 2011. Similarly, a linked post included some quotes, but not the story of the gobbled original Maurice Sendak card illustration.

As the anecdote about Maurice Sendak, an illustration, and the little boy who saw it, loved it, and ate it was increasingly shared in meme format across social media over the years, it traveled further and further from its source. Although we found no easily accessible transcript of the quote — itself popularized by the “Letters of Note” Twitter account in 2013 — tracking down the September 2011 interview with which it originated provided us with that source. During an appearance on Fresh Air eight months before his death, Sendak told the story in response to a question about his “favorite comments from readers of the years.” The quote was largely correct and properly attributed, although later memes left out the question from Gross and the first two sentence’s of Sendak’s story.