A photograph is a mug shot of "Maury Stevens, 42, of Malone," who "huffed copious amounts of glitter glue at the Clinton County Fair, knocked out a Carny and tried taking his place at the beloved '$5 Kiss a Carny Booth.'"

Originally posted on July 18 2019, the text of the post claimed:

ARRESTED – Maury Stevens, 42, of Malone huffed copious amounts of glitter glue at the Clinton County Fair, knocked out a Carny and tried taking his place at the beloved “$5 Kiss a Carny Booth.” Patrons looking for a friendly smooch became suspicious of Steven’s shiny face and never-ending gaze. Stevens quickly became aggressive and began shouting at fairgoers. Steven’s urinated on a woman’s leg before being tackled by security. Stevens was charged with multiple violations by the New York State Police.

Although a photograph was shared with the post (below), no news articles or other links were shared to substantiate the claim: 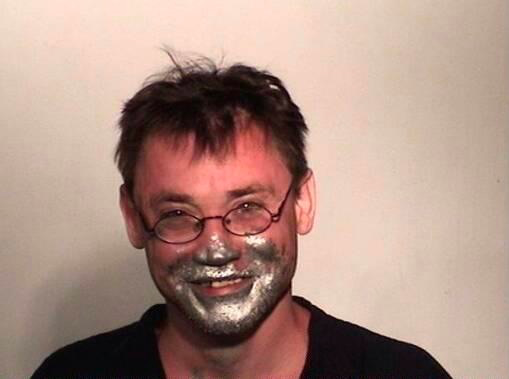 Facebook’s “On This Day” function (reminding users of their posts from previous years) may have led to re-circulation of the image. Google Trends data demonstrated a large, single spike in searches for “Maury Stevens” on July 19 2022.

TinEye reverse image search immediately demonstrated that the “Maury Stevens” image was not linked to a July 2019 incident in New York State. The photograph was first crawled in April 2011, making it at least eleven years old as of August 2022.

One of the first versions of the image was featured on website The Smoking Gun on April 23 2011, in an item titled “The ‘Alleged’ Is Probably Not Necessary When Describing This Indiana Paint Huffer.” The site reported:

For the 48th time since 1992, the Indiana man has been arrested for inhaling paint fumes. Gibson’s latest huffing collar came when his wife summoned cops to the couple’s Fort Wayne home shortly after midnight on April 14 [2011].

An April 28 2011 Metro.co.uk piece about the image included similar details:

[Gibson] was arrested at his home in Fort Wayne, Indiana after his wife Elizabeth made a call to the police following an argument.

Gibson had been arrested for the same offence 47 times prior to his latest brush with the law [in 2011].

He was found by police with a can of silver spray paint in one hand and a paint covered plastic bag in the other.

Gibson was referenced by name in a largely unrelated news story in Indiana in 2018. However, the article reported that Gibson was accused by another individual of being “intoxicated after huffing paint.”

A viral Facebook post recirculating in August 2022 purportedly depicted a man named Maury Stevens, arrested in New York for huffing “glitter glue.” The image attached to the post actually depicted a man named Kelly Gibson, and it was originally published in April 2011. Gibson was referenced in an unrelated 2018 news article, once again with “huffing paint” as part of the story.