In February 2019, several Facebook posts appeared that purported to show the royal portrait of Meghan Markle, the actress turned Duchess of Sussex. In one popular version, the sharer lauded the fact that “they” (presumably the Queen) didn’t whitewash the biracial American royal: 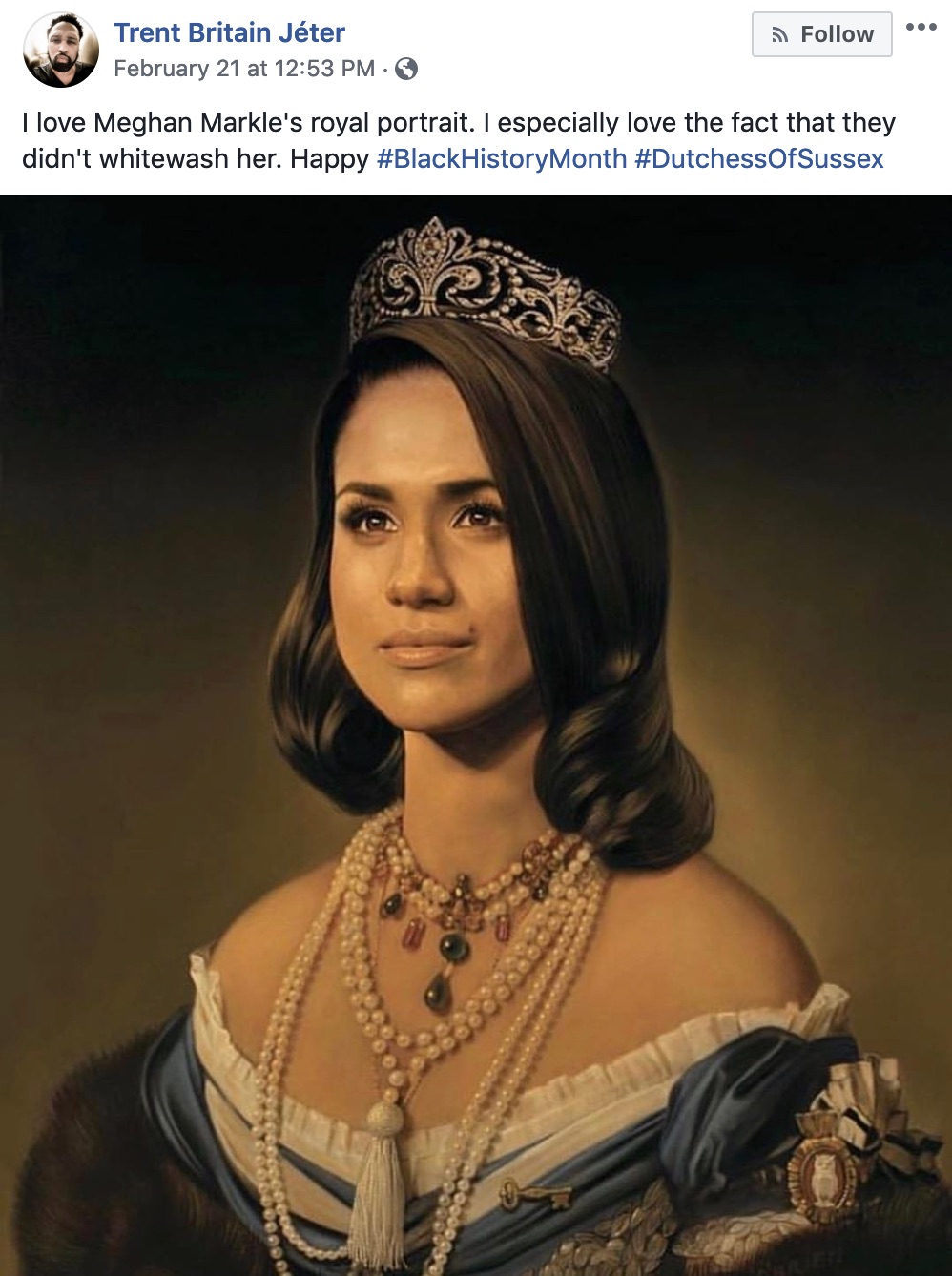 Most posts described the piece as “Meghan Markle’s royal portrait.” However, there is a Royal Society of Portrait Painters of which Queen Elizabeth is a patron, and the work was not connected to that entity (nor was Meghan Markle present in a gallery of recent works.)

As with many aspects of the royal family’s life, official royal portraits have a storied history with a known protocol. Duchess of Cambridge Kate Middleton was featured in an official portrait in 2013, prompting a retrospective of royal portraits in the UK media. The Duchess’ attire was sparse and her jewelry understated — a contrast to the circulating “portrait” of Meghan Markle.

Fashion publications and royal watchers have long debated what appears to be a strict dress code for the family, but no official guidance for attire has been made public. Nevertheless, the royal family is believed to accessorize sparsely, reserving understated but expensive jewelry for evening appearances.

Despite an absence of sanctioned sartorial guidelines around jewelry and other accessories, we were unable to find any photographs of current royals wearing layered pieces — in the portrait, Meghan Markle appears to be wearing no less than three strands of pearls, each doubled. The dress shown here is also off-the-shoulder.

The portrait made an appearance in a taped segment for the BRIT Awards featuring Beyonce and Jay-Z:

Beyoncé and Jay-Z made a much-discussed statement with their acceptance video for best international group at the 2019 Brit awards for their collaborative project the Carters. Replicating a scene from their video Apeshit, they posed in front of a portrait of Meghan, Duchess of Sussex, styled as Queen Victoria – an emphatic show of support for the royal following sustained press scrutiny….

Having your portrait hang in the home of Beyonce and Jay-Z is arguably an achievement unto itself, but it’s also a signifier that the work displayed is unlikely to be a “royal portrait” in the sense that it was sanctioned or commissioned by the Royal Family.

After the painting was observed in the background of Jay-Z and Beyonce’s BRIT Awards appearance, news organizations covered its origin and purpose in depth. The painting was created by Brooklyn-based artist Tim O’Brien for a publishing-related project:

The [segment] might not have been the same, however, without illustrator Tim O’Brien, who created the hyperrealistic portrait of the duchess that appears in the Carters’ video. The Brooklyn-based artist “did not know” that the Carters were going to use his masterpiece, “but if they can now put my piece in the Louvre, I’ll call it even,” he tells BAZAAR.com via email.

O’Brien, 54, originally created the oil painting of Meghan last year for the Summer 2018 cover of her sorority’s magazine. “I was hired by two great creative directors, Erin Mayes and Kate Collins out of Austin, to paint the cover of The Key, the magazine for the Kappa Kappa Gamma sorority,” he tells BAZAAR. “This was a collaboration and we worked together closely on the image and all the tiny details specific to the Kappa Kappa Gamma sorority.”

O’Brien shared the painting in its original form (a Kappa Kappa Gamma the key magazine cover) to his Instagram account in July 2018: 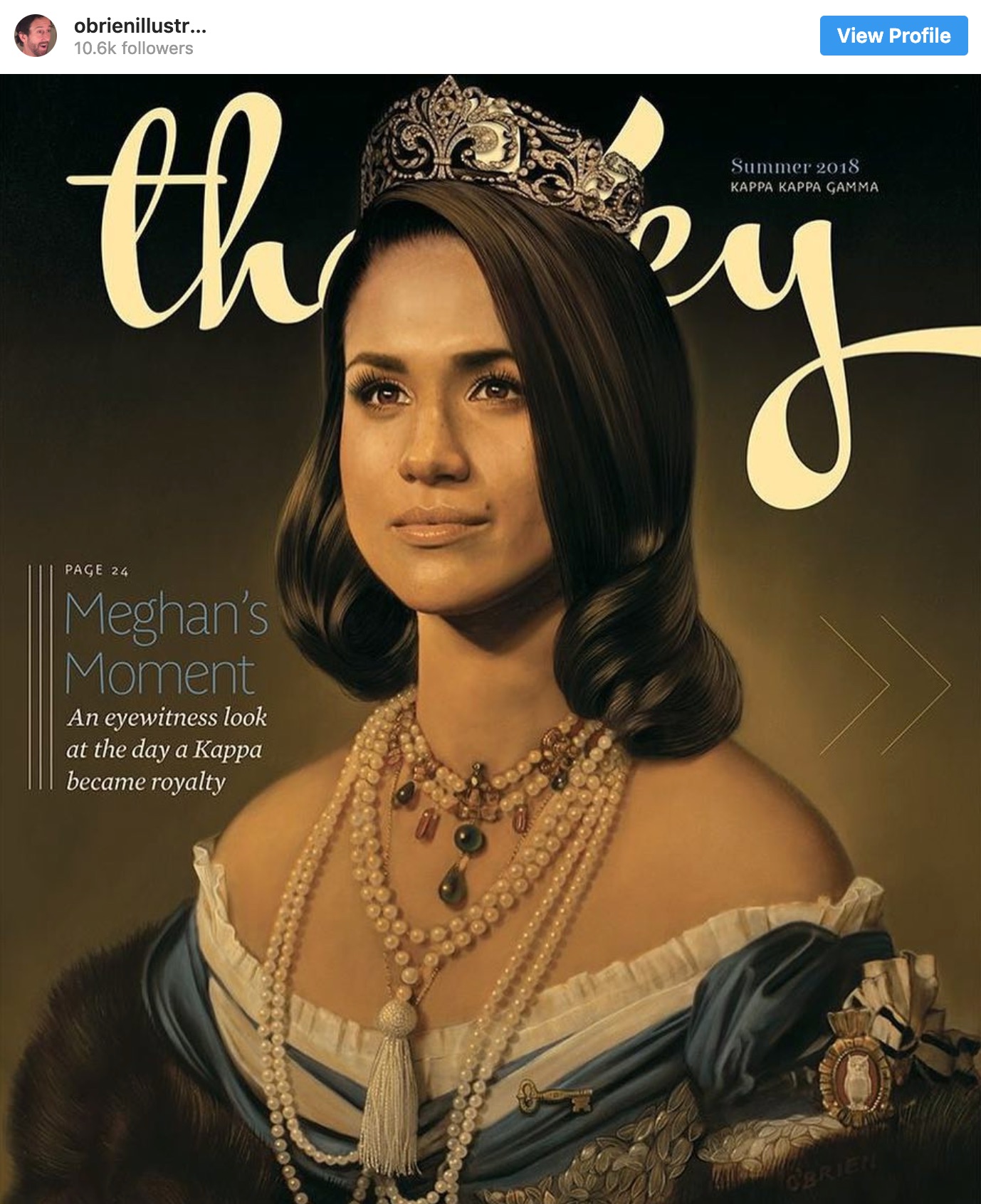 “I think she’s lovely and I wanted her to look regal, like a classic portrait, even trying to achieve an aged feel to the color of the piece,” O’Brien explains. The Duchess of Sussex doesn’t have an official royal portrait yet (although Prince Harry does), so perhaps the future artist can take some notes from this one.

Although the circulating painting of Meghan Markle is a legitimate existing painting, it hangs in a private home of two celebrities, far from Westminster. Further, it was commissioned by the fledgling royal’s sorority for a magazine cover. Royal family watchers and experts point to an unreleased dress code out of line with the portrait’s style, and no official portrait has been painted as of February 2019.