An authentic November 2020 NPR article was titled "Mexico Planning Joint Military Intervention With Canada If Trump Refuses To Leave Office," and it reported on the titular claim.

On November 11 2020, a screenshot of a purported article featured the headline “Mexico Planning Joint Military Intervention with Canada If Trump Refuses to Leave Office”: 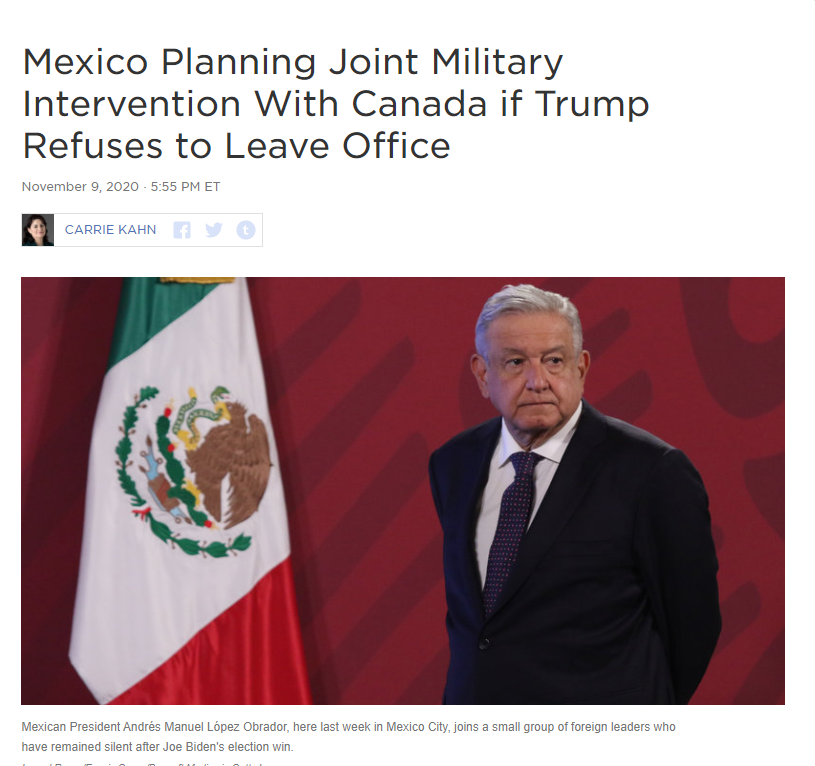 Whatever followed was cut off, but the image caption appeared to be at odds with the headline’s claim. According to the headline, as of 5:55 PM on November 9 2020, Mexico had collaborated with Canada to intervene in the United States if President Trump “refuses to leave office.” However, the caption said that Mexico’s president Andrés Manuel López Obrador had, as of November 9 2020, opted to “remain silent” on the outcome of the American election — namely, Joe Biden’s election win.

In addition to bearing visual elements matching NPR.com, the site maintained an author page for Carrie Khan, a correspondent based in Mexico City:

Carrie Kahn is NPR’s International Correspondent based in Mexico City, Mexico. She covers Mexico, the Caribbean, and Central America. Kahn’s reports can be heard on NPR’s award-winning news programs including All Things Considered, Morning Edition and Weekend Edition, and on NPR.org.

Since arriving in Mexico in the summer of 2012, on the eve of the election of President Enrique Peña Nieto and the PRI party’s return to power, Kahn has reported on everything from the rise in violence throughout the country to its powerful drug cartels, and the arrest, escape and re-arrest of Joaquin “El Chapo” Guzman. She has reported on the Trump Administration’s immigration policies and their effects on Mexico and Central America, the increasing international migration through the hemisphere, gang violence in Central America and the historic détente between the Obama Administration and Cuba.

As of November 11 2020, Khan’s author page featured an article that closely resembled the screenshot circulating. Its headline, however, was not “Mexico Planning Joint Military Intervention with Canada If Trump Refuses to Leave Office”: 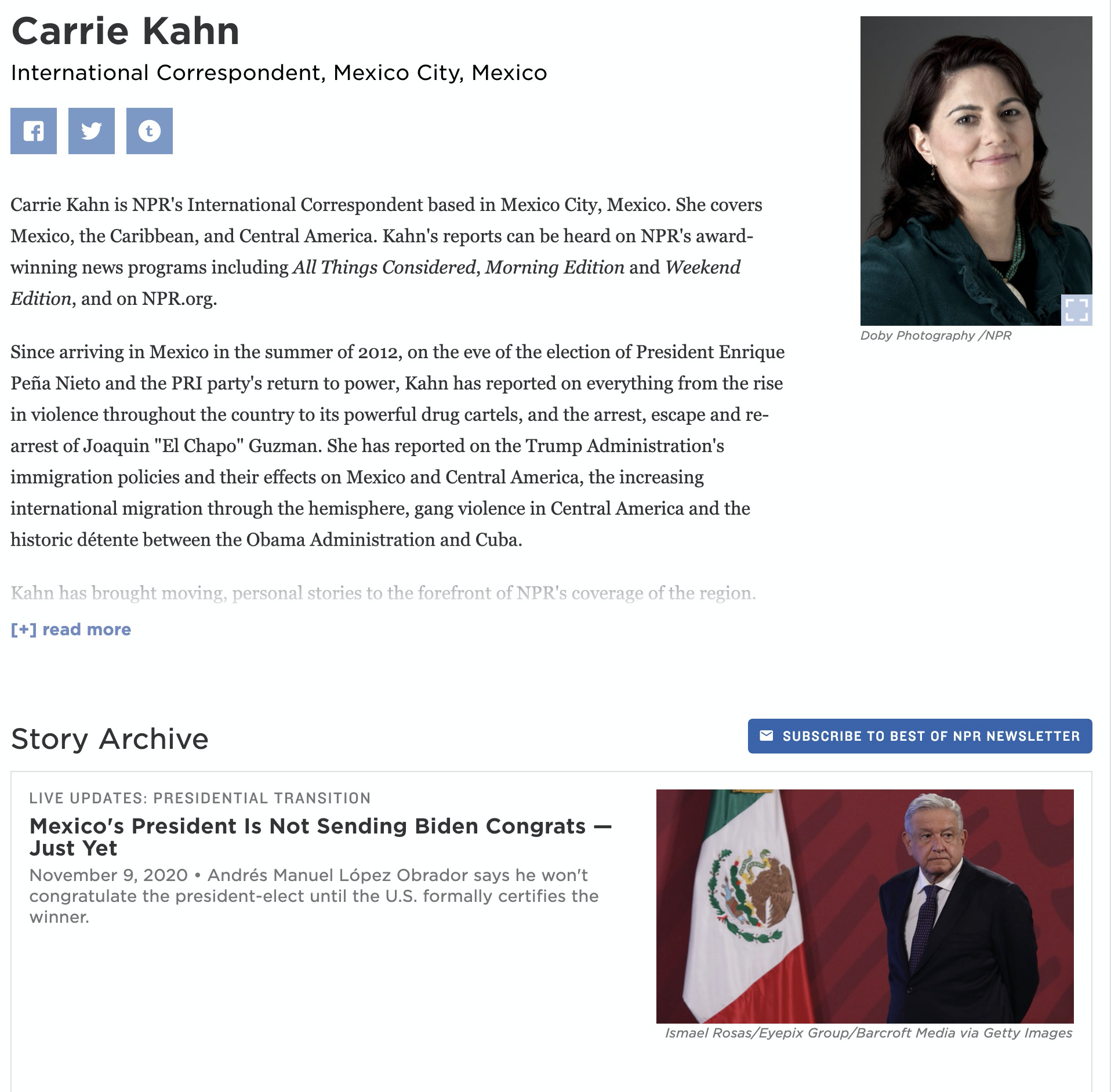 On November 9 2020 at 5:55 PM, NPR.com published a piece by Khan headlined, “Mexico’s President Is Not Sending Biden Congrats — Just Yet”: 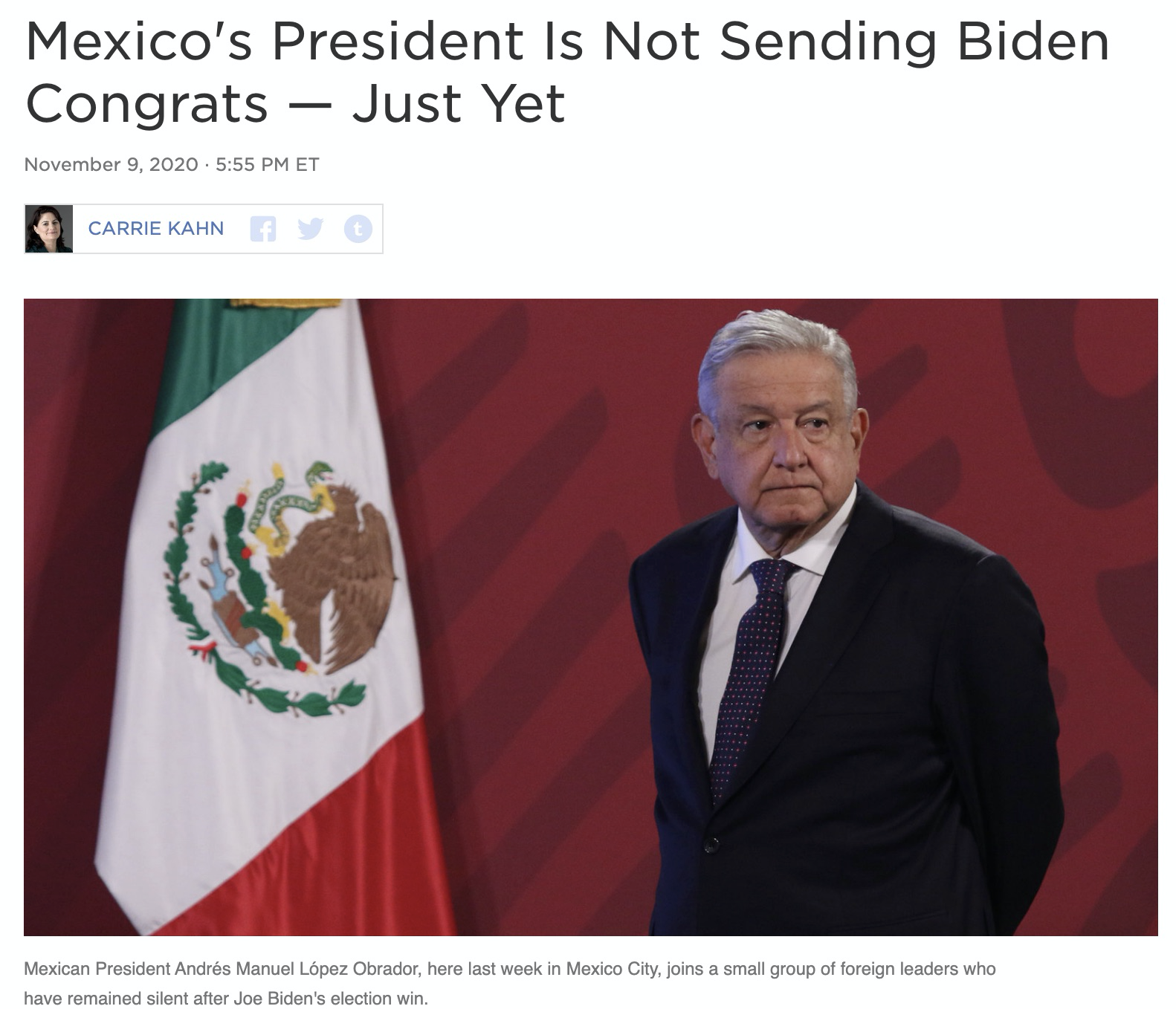 Khan’s reporting made no mention at all of Canada, nor did it mention “military intervention” involving either country or Trump’s refusal to concede. It began:

Mexico’s president says he’s not ready to send felicitaciones to President-elect Joe Biden, saying he wants to wait for U.S. authorities to certify Biden formally as the victor.

“We cannot meddle in the politics of other countries. … We have to be respectful,” President Andrés Manuel López Obrador said Monday at his regular morning news conference.

His sitting-on-the-sidelines approach puts him in the company of a shrinking group of foreign leaders who have also chosen to stay silent so far: Vladimir Putin of Russia, Jair Bolsonaro of Brazil and Kim Jong Un of North Korea.

López Obrador’s diplomatic snub left many Mexicans wondering if his close relationship with President Trump was the reason for his reluctance to acknowledge Biden’s victory.

Screenshots of a purported article headlined “Mexico Planning Joint Military Intervention With Canada If Trump Refuses To Leave Office” were lifted from a November 9 2020 NPR piece, which actually had the headline, “Mexico’s President Is Not Sending Biden Congrats — Just Yet.” The screenshot was misleadingly edited, presumably to sow confusion and exacerbate tensions regarding the outcome of the 2020 election after Biden’s win.